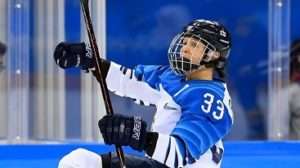 The host nation tuned up for this season’s Women’s World Championship – also to be played in Finland, in the city of Espoo – with an impressive display against its European rivals. The Finns were faultless here as they saw off the challenge of Germany, Sweden and Switzerland. However, there was a surprise overtime loss against Japan, invited as a guest team to help its preparations for the Worlds. The Japanese won their first two games and gained valuable experience ahead of April’s big event.

Finland’s success was dominated by players from its bronze-medal roster in PyeongChang back in February. Leading scorer Michelle Karvinen picked up 6 (2+4) points and blueliner Ronja Savolainen had 5 (4+1) and finished as the top goal scorer.

Germany proved to be Finland’s closest challenger, opening with a 4-2 win over Sweden and edging the Swiss in a shootout. However, the team missed its chance to top the group when it crashed to a 6-1 defeat against Finland in its final game. Four unanswered goals in the first period, two of them from Savolainen, paved the way for an emphatic home win.

The Swedes got off to a fast start with a 7-0 victory over Switzerland – Hanna Olsson, 19, scored a hat trick and highly-rated young defender Maja Nylen-Persson had three assists – but the Damkronorna could not maintain that momentum.

Switzerland came fourth among the European nations with just one point from a shootout loss against Germany to show for its efforts. However, the Swiss became the first team to defeat the Japanese guests, winning 2-0 thanks to goals from Alina Muller and 16-year-old defender Sinja Leemann. Muller made her 100th appearance for the national team in the 1-4 loss against Finland and marked the occasion with a goal.

For Japan, there were eye-catching contributions from Miho Shishiuchi, Haruna Yoneyama and Rui Ukita. Shishiuchi led the team’s scoring with 3+1, including two goals against the Finns. Yoneyama’s two goals paced the Japanese to its 4-1 success over Germany, while Ukita got the overtime winner against the host and had three helpers. All three forwards were part of the Olympic roster last February.

The next phase of the Eurotour will be played in Russia in February before the teams will meet again at the 2019 IIHF Ice Hockey Women’s World Championship, 4-14 April 2019 in Espoo.

The Czech Republic came out on top in a four-team tournament in Pribam, taking gold ahead of Norway after the teams tied on six points. It all came down to the head-to-head meeting, and the Czechs skated to a 2-0 verdict. The home defence put in a strong performance to limit Norway to just 13 shots at Kristyna Blahova’s net but in a tight game there was no score until midway through the third period. Tereza Vanisova got the winner in the 48th minute, Noemi Neubauerova added another in the last second.

Norway also finished on six points thanks to wins over Russia (2-1) and France (2-0). The French, preparing for a first ever campaign in the top division of the World Championship in April, took third place thanks to a 3-1 victory over Russia. After falling behind to Tatyana Chizhova’s second-period goal, Les Bleus recovered in the third to win thanks to a double from Chloe Aurard and a late clincher from Betty Jouanny. For France, this was a first victory over a Russian team ranked fourth in the world.

Russia, using an experimental roster heavy on players from last season’s U18 Women’s World Championship roster, found life difficult against more experienced opposition. After defeats against Norway and France, the Russians gained some consolation on the final day with victory over the Czechs but remained in fourth place in the group table.

Two exhibition games in Zeltweg between Austria and Slovakia ended with 5-2 scores. First the Slovaks won thanks to a Janka Hlinkova hat trick, the day after Austria took revenge with the same score.