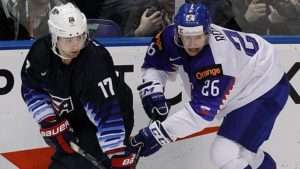 
Michael Anderson and Evan Barratt scored in a span of 4:32 of the third period to help give the United States a 2-1 victory against Slovakia in Group B competition at the 2019 IIHF World Junior Championship at Save-On-Foods Memorial Centre on Wednesday.

Goalie Kyle Keyser (Boston Bruins) made 13 saves, including a penalty-shot attempt by Adam Liska 13:15 into the third to help U.S. maintain the lead.

Anderson (Los Angeles Kings), a defenseman, scored a power-play goal 1:10 into the third for a 1-1 tie. Barratt (Chicago Blackhawks) scored off his backhand at 5:42 for a 2-1 lead.

“I thought our line was playing well all night,” Barratt said. “Tyler Madden and Noah Cates are really good players down low and we were cycling all night and we finally got a break and saw an opening to the net and kind of just shot … I don’t know how it went in but it looked pretty good I guess.”

Defenseman Marek Korencik gave Slovakia a 1-0 lead in the second period when he scored off a snap shot from the left circle at 17:17. Slovakia goalie Samuel Hlavaj, a B- rated goalie in NHL Central Scouting’s Players to Watch for the 2019 NHL Draft list, made 32 saves.

Forward Jason Robertson (Dallas Stars) was denied on a penalty shot by Hlavaj 12:29 into the second to keep the game 0-0. The victory by the United States against Slovakia was its 13th in 18 tries, including one tie, in WJC competition.

“We knew it was going to be hard going into it and we just wanted to work every shift in five-minute increments of the game,” Barratt said. “We knew it wouldn’t be easy but at the end of the day we knew we would run them down and come out on top.”

The United States will next play against Kazakhstan in preliminary-round action Friday.

Max Comtois (Anaheim Ducks) scored four goals and Morgan Frost (Philadelphia Flyers) had three goals and two assists to help Canada open the 2019 IIHF World Junior Championship with a 14-0 win against Denmark in Group A play at Rogers Arena in Vancouver on Wednesday.

“The message to us was stick to our game plan and don’t; sway away from that, don’t get any bad habits,” Frost said. “We are trying to build with every game and that was the message, keep playing and keep playing the right way and we did a good job of that.”

“It’s always fun to score goals and it doesn’t happen often,’ said Comtois, who has not had a hat trick since his first season of junior hockey with Victoriaville of the Quebec Major Junior Hockey League in 2016-17. “I got a couple lucky bounces and good passes from my teammates. I just put the puck in the net.”

Frost was named player of the game for Canada and his name was chanted by the crowd as he received the award.

“That was coolest moment I have ever been a part of and I had chills running right through my body,” Frost said.

Michael DiPietro (Vancouver Canucks) made 14 saves, had an assist and stopped Danish forward Phillip Schultz, who is eligible for the 2019 NHL Draft, on a penalty shot in the third period.

Mads Sogaard, a 6-foot-7, B-rated goaltender on NHL Central Scouting’s players to watch list for the 2019 draft, stopped 30 of 41 shots before leaving with a left leg injury with 7:27 left in the third period. Undrafted 19-year-old William Rorth made one save in relief.

Defenseman Erik Brannstrom, a first-round pick (No. 15) in the 2017 NHL Draft by the Vegas Golden Knights, scored two power-play goals to help lead Sweden to a 2-1 win against Finland in Group B action at Save-On-Foods Memorial Centre in Victoria on Wednesday.

The win gives Sweden 45 straight victories in preliminary-round action at the World Junior Championship. The last defeat was Dec. 31, 2006, 3-2 in overtime against the United States.

Brannstrom scored his first power-play goal off a shot from the point at 13:14 of the first period to give Sweden a 1-0 lead. His second came off a one-timer from the left circle on a 5-on-3 advantage 3:55 into the second for a 2-0 lead.

Talvitie scored a power-play goal 16:26 into the third off a pass from Kaapo Kakko, an A-rated skater in NHL Central Scouting’s Players to Watch list for the 2019 NHL Draft, to make it 2-1.

Defenseman David Kvasnicka scored 52 seconds into overtime and Lukas Dostal (Anaheim Ducks) made 26 saves to help the Czech Republic to a 2-1 win against Switzerland to open Group A play at the 2019 IIHF World Junior Championship at Rogers Arena in Vancouver.

Martin Kaut (Colorado Avalanche) had a goal and an assist for the Czech Republic, outshot Switzerland 9-1 to start the game. Kvasnicka, undrafted, beat Swiss goalie Luca Hollenstein with a high screened shot from above the right face-off circle shortly after Kaut hit the post.

Nando Eggenberger, a 19-year-old C-rated skater on NHL Central Scouting’s November players to watch list for the 2019 NHL Draft, put Switzerland ahead 1-0 with a power-play goal at 7:45 of the second period.

Kaut tied it 1-1 at 9:02 with a one-timer of a pass from below the net by Martin Necas (Carolina Hurricanes). Kaut, 19, has 12 points (five goals, seven assists) in 26 games with Colorado in the American Hockey League.

Hollenstein, who is eligible for the 2019 draft, made 25 saves for Switzerland.