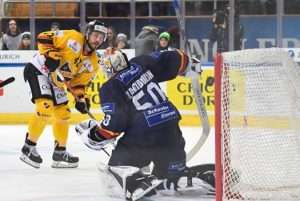 KalPa Kuopio produced the first upset on Friday afternoon at the 92nd Spengler Cup. The young Finns beat Metallurg Magnitogorsk. The only goal was shot by Tommi Jokinen in overtime after 167 seconds.

Pure suspense throughout the last game of the Torriani group. The game was an offensive extravaganza because both teams were well-organized, disciplined and took few risks. In addition, both goaltenders intervened successfully in the rare precarious situations during the regular game time, allowing no goals to be scored. A 0-0 after 60 minutes has not happened at the Spengler Cup in a very long time – not since the introduction of the finals in 1986. Only during overtime – where 3-on-3 players compete – were the Finns able to score the only goal. Otto Leskinen superbly out-maneuvered so that KalPa’s Captain Tommi Jokinen could beat Magnitogorsk’s goalie Artem Zagidulin in the 62:47 minute of the game. The Finn Daniel Manzato was able to celebrate a shutout. The Ambri goalie is assisting KalPa Kuopio at the Spengler Cup due to Jonathan Iilahti being injured.

With this win making them group leader, the Finns qualify directly for the semi-finals on Sunday. Metallurg Magnitogorsk will have to take the indirect route via the quarter-finals on Saturday. The opponent from the Cattini group will be known after tonight’s match-up between Team Canada and the Nuremberger Ice Tigers. The Russians are paying the price for reserving their key players such as Viktor Antipin, Nikolai Kulemin, Matt Ellison, Jewgeni Birjukow and Dennis Rasmussen. 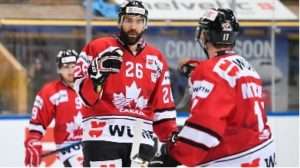 Team Canada’s Daniel Winnik, centre, celebrates after scoring against the Ice Tigers at the 92nd Spengler Cup on Friday

Dante Fabbro scored twice to help power Canada to a 6-2 victory over the Nurnberg Ice Tigers on Friday, capping round-robin play at the Spengler Cup.

Daniel Winnik, Andrew Ebbett, Zac Dalpe and Dion Knelsen scored in a second-period outburst for the defending champion Canadians (2-0-0), who finished first in their group to advance directly to Sunday’s semifinal.

Canada took control of the game in the second period, outscoring Nurnberg 4-1 and outshooting the Ice Tigers 21-4.

Winnik broke a 1-1 tie five minutes into the middle frame and Ebbett gave Canada a two-goal cushion at 11:14. Dalpe followed two minutes later and Knelsen added to the barrage with just over two minutes left in the period.

“This game was an opportunity for our team to improve our chemistry, and I felt that we accomplished that,” said head coach Kevin Dineen. “When you are able to play all four lines continuously it helps generate momentum, and that was a key contributor to our team’s success. We are looking forward to the semifinals on Sunday.”

Fabbro’s first goal opened the scoring 2:21 into the first period and his second gave Canada a 6-1 lead early in the third.

Maxim Lapierre and Dominic Moore chipped in with two assists apiece for the Canadians and Zach Fucale made 19 saves.

“I thought that our team played great,” Fabbro said. “The atmosphere in the arena was incredible, and our team fed off the crowd’s energy. It was a great win for our team heading into the semifinals.”

Canada was coming off a 2-1 victory over HC Davos in the tournament opener Wednesday.

The Canadians play the winner of Saturday’s quarter-final between Metallurg Magnitogorsk and the Ice Tigers on Sunday. Metallurg finished second in its group with three points on an overtime win and an overtime loss.

The final is Monday. 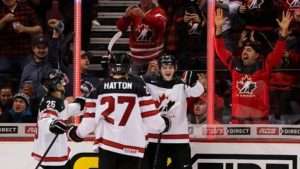 Philipp Kurashev (Blackhawks) scored twice and Akira Schmid (New Jersey Devils) made 29 saves for Switzerland (0-0-1-1), which opened with a 2-1 overtime loss to the Czech Republic on Wednesday.

Canada, which opened with a 14-0 win against Denmark, went up 1-0 on Switzerland on the first shift when Glass, picked No. 6 in the 2017 NHL Draft, scored 36 seconds into the first period.

Switzerland settled in, and Kurashev, a fourth-round pick (No. 120) in the 2018 NHL Draft, tied it 1-1 with a power play one-timer 46 seconds into the second period.

Scott made a great glove save off Swiss forward Yannick Bruschweiler alone in the slot at 4:52. Entwhistle, a third-round pick (No. 69) in 2017, put Canada ahead for good at 5:55, converting a pass from Shane Bowers (Colorado Avalanche) to make it 2-1.

Kurashev scored his second power-play goal of the tournament with 1:49 left, and Schmid pulled for an extra attacker, to make it 3-2.

“They’ve only been together a short while, so chemistry and learning how to win these tight games, and living through the goalie-out situations, it’s all new to them and we try to guide them through it and they are navigating pretty well,” said Canada coach Tim Hunter. Overall we’re really happy with where we’re at, just keep building, learn from whatever mistakes we made tonight and get better from it.”

Kaapo Kakko, an A-rated skater in NHL Central Scouting’s Players to Watch list for the 2019 NHL Draft, scored his first goal of the tournament to help Finland to a 5-0 win against Kazakhstan in Group B at Save-On-Foods Memorial Centre.

Latvala gave Finland a 1-0 lead off a wrist shot from the left circle 12:52 into the first period before Talvitie extended the lead 2:16 later with an unassisted goal off a turnover. Vainionpaa scored 12:49 into the second to give Finland a 3-0 lead.

Alexander Romanov (Montreal Canadiens) had a goal and two assists, Danil Tarasov (Columbus Blue Jackets) made 21 saves, and Russia opened its tournament with a 4-0 win against Denmark in Group A at Rogers Arena on Thursday.

Goalie William Rorth started for Denmark after replacing Mads Sogaard in the third period of a 14-0 loss to Canada on Wednesday. Rorth, who gave up three goals on four shots against Canada, made 16 saves.

Romanov, a defenseman picked in the second round (No. 38) of the 2018 draft, made it 2-0 with 2:10 left in the second period with a screened shot from the top of the left face-off circle. The 18-year-old, who does not have a point in 28 Kontinental Hockey League games with CSKA, assisted two goals in the third period.

Emil Bemstrom scored two goals to help lead Sweden to a 5-2 victory against Slovakia at Save-On-Foods Memorial Centre in Group B on Thursday.

The win gives Sweden 46 straight victories in preliminary-round play at the World Junior Championship. Sweden’s last loss was 3-2, in overtime, against the United States on Dec. 31, 2006.

Lucas Elvenes (Vegas Golden Knights) and Isac Lundestrom (Anaheim Ducks) each had a goal and an assist, and Erik Brannstrom (Golden Knights) scored for Sweden (2-0-0-0).

Brannstrom scored his third power-play goal in two tournament games to give Sweden a 4-1 lead 5:09 into the third period. Sweden’s final goal at 12:37 of the third. 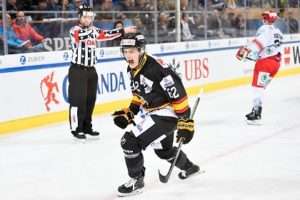 At their Spengler Cup debut on Thursday afternoon, KalPa from Kuopio won 3-1 against Ocelari Trinec. Alexander Ruuttu dazzled as the first player to shoot 2 goals in one game.

The young Finns from Kuopio and the Czech league leader Trinec provided a typical Spengler Cup match-up – exactly as the spectators love – offensively with lots of tempo and numerous goal opportunities, following the motto “play and let play”. That only 4 goals were scored is primarily thanks to the efforts of the KalPa goaltender Denis Godla. The 23-year old in the Finnish net – who played for Slovakia at the World Championships last season – kept his team in the game with his spectacular saves. He deflected 29 out of 30 shots-on-goal, giving him a defensive quota of 96.67 percent. At times it seemed the Czechs were careless with their goal opportunities.

The first goal was scored by Alexander Ruuttu when he accepted a fantastic straight pass from Jaakko Rissanen (13th minute). The scorer has ice hockey in his blood: his father Christian Ruuttu participated in 663 NHL games. Towards the end of his career, he played for the Grasshoppers in the B National League during the 1996/97 season. When the defender Martin Gernat shot the equalizing goal for the seemingly overpowering Czech team in the 33rd minute, the spell seemed to be broken. But only 53 seconds was needed by Alexandre Texier to take advantage of a defensive mistake by Trinec to counterattack and take the lead 2-1. Ruuttu sunk his personal second goal just 32 seconds into the third period to decide the game. 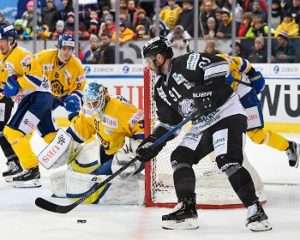 In an absolutely spectacular game, HC Davos wins against the Thomas Sabo Ice Tigers 3-2 at the Spengler Cup Thursday night. The Germans caught up after falling behind 0-2. The winning goal was shot by the 18-year old defenseman Julian Payr in the sold-out Vaillant Arena. Game winner for HCD was also the outstanding goalie Gilles Senn.

After Davos began its last 3 games under Coach Harijs Witolinsch by falling behind in the first period each time, they started the game against the Ice Tigers powerfully. Their intense concentration in the first period paid off with 2 brilliant goals. Inti Pestoni, elegantly and with lots of speed, skated around Nuremberg’s defenseman Marcus Weber before he left the goaltender Niklas Treutle no chance to deflect (6th minute). Just 64 seconds later Dario Simion completed a textbook combination from Andres Ambühl via Niklas Klasen to sink a direct pass into the net.

Taking advantage of a power play situation at the start of the second period, the Germans found their way into the game. Senn became the focus. He displayed his best defensive maneuvers against Chris Brown and following the end of a penalty also against Chad Bassen, both solo attacks. For HCD Coach Witolinsch it was clear that the time had come, in the 26th minute, for a timeout to bring the Davos team back into the game. The result was a more open, spectacular slugfest with many scoring opportunities for both sides (13-14 shots-on-goal in the second period alone). Brandon Buck scored in a counterattack to reduce HCD’s lead to one (37th minute).

In an enthralling final period, the Olympic silver-medal winner Leo Pföderl increased the intensity of the game by scoring the equalizing goal during a power play situation for the guests (49th minute). Of all the players, it was the youngest on the ice that landed the deciding puck in the net. The 18-year old HCD defenseman Julian Payr scored after receiving a cross pass from Klasen. Senn defended his team’s narrow lead for the remaining time. The HCD goaltender demonstrated his magnificent skills. He deflected 33 shots-on-goal and was selected as Davos’ best player of the game.