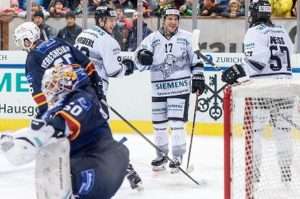 Metallurg Magnitogorsk – the most frequently named challenger of the defending champion Team Canada – must pack their bags and depart. The Russians surprisingly lost their quarter-final game against the Thomas Sabo Ice Tigers from Nürnberg 3-1 on Saturday afternoon. The Germans now face Team Canada in the semi-finals on Sunday afternoon (3:10 pm).

The Ice Tigers deservedly beat Metallurg Magnitogorsk with their aggressive, hands-on efficient and strategic performance. They effectively steered the game to their advantage. After just 246 seconds of play, the Captain Patrick Reimer shot the go-ahead goal. At the beginning of the second period, Metallurg’s top-scorer Nikolai Kulemin equalized the game in a power play situation. However, just about 5 minutes later, Brandon Buck also took advantage of a player majority and reinstated the lead for the Germans 2-1. Just prior to the end of the period, Leonhard Pföderl sunk the 3rd goal for the Ice Tigers in a training manual counterattack. Thereafter, the Nürnberger successfully defended their lead. Goaltender Niklas Treulte proved his reliability and absolutely faultless support. He deflected 29 shots-on-goal, resulting in a defensive quota of 96.67 percent.

In the last 4 minutes of the game, the Russians played with 6 on the ice and during 67 seconds were even in double majority to attempt to turn the tide. Their several attempts failed against Treutle, their offensive strikes were mostly harmless. In the 3 games, the team only achieved 2 goals, one of which was the winning shot during the penalty shoot-out against Trinec.

The surprising poor performance of Metallurg Magnitogorsk is in line with the disappointing representation of the teams from the Kontinental Hockey League (KHL) in recent years – supposedly the best league outside of the North American NHL. Since the tournament win by SKA St. Petersburg in 2010, 12 KHL teams have participated at the Spengler Cup. Only 3 of them were able to win at least 2 games at the same tournament. 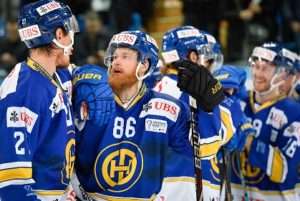 Klasen shoots HCD into the Semi-Finals

HC Davos will play against KalPa Kuopio on Sunday evening (8:15 pm) at the Spengler Cup to decide who qualifies for the finals. The home team secured their qualification for the semi-finals with their victory against the Czech championship leader Trinec 3-1. Double-scorer Linus Klasen and goaltender Anders Lindbäck stuck out amongst the strong HCD squad.

The Czechs began by resolutely dictating the game. The Davos team only gained momentum during the two penalties against Trinec, although they were unable to create any real goal chances. Both teams then switched from primarily defensive to offensive play, providing the 6,300 spectators with a fantastic match-up with many scoring opportunities. Determined, Linus Klasen scored a goal after receiving a pass from Dario Simion in the 15th minute to give Davos the lead.

Several penalties hindered the flow of the game in the second period. The home team came increasingly under pressure and the goaltender Anders Lindbäck became the center of attention. Tino Kessler missed making it 2-0 when he attempted a speedy counterattack. Due to the flow of the game – 9-4 shots-on-goal for the Czechs – it seemed only a matter of time until the equalizing goal would happen. After an advance by Trinec Captain Lukas Krajicek and his cross pass, Ondrej Kovarcik was able to land the puck in the net shortly before the end of the second period to make it 1-1.

At the beginning of the last period it was obvious that HCD was back in the game. Both teams intensively sought to decide the game which led to a spectacular slugfest with many scoring opportunities and exceptional defensive maneuvers by both goalies. Klasen emerged as the match winner. After a shot-on-goal by Ambühl, the Swede reacted the quickest and scored on the rebound. The Czechs answered fiercely but failed to beat the exceptional HCD goaltender Lindbäck, who defended 27 shot-on-goal during the entire game. Dino Wieser scored an empty netter almost exactly as the game-ending siren rang.

China told to get skates on 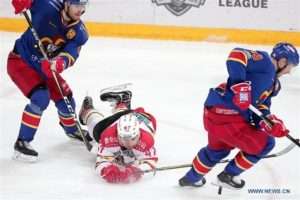 Last May, the International Ice Hockey Federation (IIHF) voted to allow China to enter its men’s and women’s teams in the Beijing 2022 tournaments, breaking with the convention of making the host nation qualify through competition.

However, some observers have expressed concerns that the current poor standard of the Chinese squads could dilute the quality of the Games.

“It’s a challenging situation for China, especially in the men’s game,” IIHF President Rene Fasel told China Daily in Shanghai at the recent launch of the fifth mass ice and snow sports carnival.

“It takes as long as 15 years to develop good hockey players to be competitive at the highest level－at the moment, China has only four.

“We have to make sure that the Olympics are the highest-level competition, but at the same time give the host teams a chance to put on some decent performances.”

Unlike most team sports at Summer Olympics where hosts are awarded automatic entries, the 12-team men’s and 10-squad women’s hockey Olympic tournaments traditionally require all nations to go through a challenging qualification system.

China’s women’s team enjoyed a short-lived purple patch during which it reached the 1998 Olympic semifinals in Nagano, Japan. However, since its last Games appearance in 2010 in Vancouver, the 20th-ranked female squad has suffered a sharp decline and has seen its funding cut.

Fasel, though, is backing China to prove the doubters wrong in four years’ time.

“I don’t know if you have the word ‘impossible’ in Chinese. I don’t think so. The Chinese character is that when you want something you will do it by working day and night, putting in extra effort and manpower until you make it happen,” said the 68-year-old Swiss.

The Chinese Ice Hockey Association managed to persuade the IIHF to grant the Olympic spots by promising to build a domestic professional league that would sustain the sport’s development here after the Games.

The association, which separated from the State-run sports system last year, pledged in a recent report that the new national league would begin in May 2019 and feature eight clubs.

“Increasing the number of games homegrown talents play is critical, because in the past they’ve had a minimal amount of tests,” said CIHA president Cao Weidong.

The new league is expected to be made up of teams from four major clubs－Kunlun Red Star, Jilin City Investment, Beijing Shougang and Zhongshang Hokay－and squads developed by northeastern provincial sports bureaus.

“We want to have the Chinese preparing the two national teams (for 2022) and at the same time to build their leagues so we can guarantee the sport’s legacy and be sustainable after the Olympics,” said Fasel.

The new league, Fasel hopes, will form the top of a pyramid which can be built on the foundations of a growing grassroots game－the popularity of which is highlighted by the 2,600 junior players registered for the Beijing Minor Hockey League’s 2018-19 season.

The teams all feature overseas talent of Chinese ancestry drafted through 2022 Olympic tryouts. The aim is to have them eligible to represent China in time for the Games.

However, Fasel says China’s plans are easier to accept.

“It’s a good step that China only wants players with Chinese heritage. A gap (in development) of at least 15 years cannot be closed anytime soon, so it’s necessary to use these groups of talent,” he said. 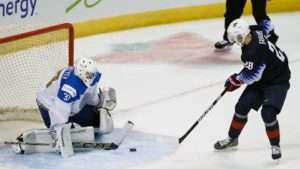 
Joel Farabee (Philadelphia Flyers) scored a natural hat trick in the first period to help the United States defeat Kazakhstan 8-2 in Group B at the 2019 IIHF World Junior Championship at Save-On-Foods Memorial Centre on Friday.

United States center Jack Hughes, the consensus No. 1 pick in the 2019 NHL Draft, was a surprise scratch because of an undisclosed injury and is day to day. The U.S. didn’t need him, outshooting Kazakhstan 66-13.

“I thought Joel Farabee was very good tonight,” said United States coach Mike Hastings. “To have Poehling go back to the middle and play the game that he played tonight shows a lot about his versatility. And it was a good night for us.”

Forwards Dmitriy Mitenkov and Andrei Buyalskiy, who are each eligible for the 2019 draft, scored for Kazakhstan (0-0-0-2). Goalie Vladislav Nurek started, but was replaced after two goals by Demid Yeremeyev, who stopped 19 of 24 shots before being replaced by Nurek, who finished with 41 saves.

“Scoring a hat trick is definitely nice, but I’ve got to give it to my linemates and the D getting the puck up,” said Farabee. “We created a lot of turnovers, which gave me those chances.”

The United States plays Sweden (2-0-0-0) on Saturday. Sweden has won 46 consecutive preliminary-round games at the WJC.

“It’s definitely going to be a bit more skill, a tougher game,” said Farabee. “We definitely want to end their streak in the prelims, so I think we’ll be throwing the kitchen sink at them.” 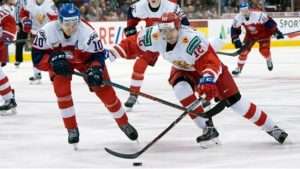 Artyom Galimov and Nikolai Kovalenko (Colorado Avalanche) each scored shorthanded, and Russia defeated the Czech Republic 2-1 in Group A at Rogers Arena.

Pyotr Kochetkov, an undrafted 19-year-old goalie eligible for the 2019 NHL Draft, made 24 saves for Russia, which opened with a 4-0 win against Denmark on Thursday.

Jachym Kondelik (Nashville Predators) scored a power-play goal, and Lukas Dostal (Anaheim Ducks) made 26 saves for the Czech Republic, which opened with a 2-1 overtime win against Switzerland on Wednesday.

Galimov, a 19-year-old still eligible for the 2019 NHL Draft, made it 1-0 at 17:05 of the first period with a solo rush, cutting left across the slot and beating Dostal with a wrist shot the other way.

Kondelik, selected in the fourth round (No. 111) in the 2018 draft, scored 53 seconds later on the same power play to bring the Czech Republic within 2-1 when a point shot bounced off his face, up and over Kochetkov, and into the net.