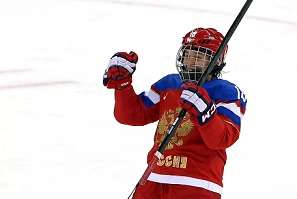 By Michelle Jay and LocksTheFox – The Ice Garden

Better late than never for Russia, who peppered Swiss keeper Janine Alder with 43 shots. All three goals in this game came on the power play.

The Swiss opened the scoring through Evelina Raselli midway through the first, but Russia tied the game with ten seconds to go on a shot by Anna Timofeyeva. That score would stand until the third, when Russia put the game in their captain’s hands and she came through: Olga Sosina netted the winner with just 37 seconds to go in regulation on a power play goal.

The Czech Republic opened their tournament with a win over France.

The French struggled to say out of the box, taking six penalties over the course of the game. It cost them twice as they gave up two goals while down a player.