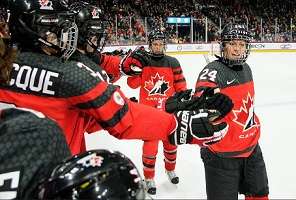 By Michelle Jay and Leighannstrollo – The Ice Garden

At the beginning it looked as if the Swiss were going to give the Finns a run. Switzerland opened the scoring and phenom Alina Muller tied the game in the second period, but Finland broke out after that scoring four unanswered goals. Switzerland didn’t win a single game in preliminaries but will move on to the quarterfinals as all five Group A teams advance.

It was the Natalie Spooner show as she tallied her 50th-52nd goals for Team Canada as well as a primary assist to give Canada a safe lead early in the game. Russia pulled goaltender Anna Prugova after three goals in favor of Morozova who let in two. Russia struggled taking four early penalties, and getting no shots on goal the entire second period.

Despite losing Marie Philip-Poulin early to injury, who made her first appearance in this Worlds tournament this game for Canada, Russia could not pull it together to score more than one late power play goal by Liana Ganeyeva. Shots on goal ended 45-8 for Canada. Spooner was given player of the game along with Russia’s Anna Shibanova.

The Czech Republic continued their roll in Group B, winning their third straight game and securing their spot in the quarterfinals.

It took an extra 1:44 of hockey for France to win their first game in the top tier but Chloe Aurard scored, unassisted, to secure the win in their final preliminary game. They’ll face either Sweden or Japan for the 9th place game.