2019 Worlds: USA and Finland to meet in gold medal game 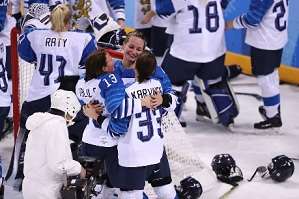 By Michelle Jay – The Ice Garden

After nine thrilling days, the 2019 IIHF World Championship are down to the final moments.

Canada, who fell to the host nation in the semifinal, will meet Russia at 9 a.m. EST on the bronze medal game. Canada has never won anything less than a silver medal while Russia has won three bronze medals.

It’s a curious time for the Canadian National Team. They haven’t won an international tournament since the 2014 Sochi Olympics. They’ll still be missing star and captain Marie-Philip Poulin, who suffered a lower-body injury in her final regular-season CWHL game.

Despite needlessly dressing for the Clarkson Cup Final, Poulin did not play in the CWHL playoffs. She came to Finland with numerous questions regarding her fitness only to play one game and appeared to reinjure her knee in the process. In the semifinal, forward Blayre Turnbull left the game with the injury.

In the gold medal game, Finland will meet the US at 1 p.m. EST. This marks the first time in Worlds history that the final will not feature both the US and Canada. The US is in pursuit of their fifth-straight and ninth total gold medal while Finland is looking for their first placement higher than bronze.

The US’s path to the gold medal game hasn’t seen many roadblocks. They have yet to lose a game, including two steamrollings of Russia in both the preliminaries and the semifinal. Their only real test was Canada in the preliminaries, thought Japan put up a much better fight in the quarterfinals than many expected. They’ve been relatively healthy, at least compared to other teams.

Finland could possibly be without legendary defender Jenni Hiirikoski, who left the semifinal after appearing to take a stick to her head. Losing her would be a huge blow to the team, putting even more pressure on goaltender Noora Räty.

In the preliminaries, the United States best Finland, 2-6.