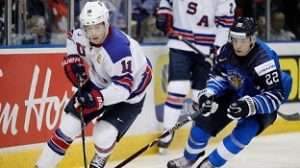 Tyler Madden (Vancouver Canucks) scored two goals, and the United States earned the second seed in Group B with a 4-1 win against Finland at the 2019 IIHF World Junior Championship at Save-On-Foods Memorial Centre in Victoria, British Columbia, on Monday.

Jason Robertson (Dallas Stars) had a goal and an assist, Ryan Poehling (Montreal Canadiens) scored, Josh Norris (Ottawa Senators) had two assists, and Cayden Primeau (Montreal Canadiens) made 27 saves for the United States (3-0-1-0), which will play the Czech Republic in the quarterfinals in Victoria on Wednesday.

Jesse Ylonen (Montreal Canadiens) scored and Ukko-Pekka Luukkonen (Buffalo Sabres) made 35 saves for Finland (2-0-0-2), which will play Canada in the quarterfinals at Rogers Arena in Vancouver, British Columbia, on Wednesday.

Robertson scored from the left circle at 19:51 of the first period to give the United States a 1-0 lead.

Madden scored at 11:40 of the second period to make it 2-0, and Poehling scored his team-leading fifth goal of the tournament at 16:42 to extend the lead to 3-0. 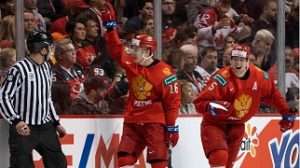 Pavel Shen (Boston Bruins) scored the tiebreaking goal at 11:00 of the third period, and Russia earned the top spot in Group A with a 2-1 win against Canada at the 2019 IIHF World Junior Championship at Rogers Arena in Vancouver, British Columbia, on Monday.

Shen got behind Canada defenseman Markus Phillips (Los Angeles Kings) on the right wing and cut back across the top of the crease before beating goalie Michael DiPietro (Vancouver Canucks) to the far post.

“It was a good win and tough game, but it’s just preliminary, so we should forget about this game and think about future games,” Shen said through a translator.

Grigori Denisenko (Florida Panthers) also scored and Pyotr Kochetkov made 30 saves for Russia (4-0-0-0), which will play Slovakia in the quarterfinals on Wednesday.

Cody Glass (Vegas Golden Knights) scored and DiPietro made 29 saves for Canada (3-0-0-1), which will play Finland in the quarterfinals.

“Tonight’s the last rehearsal for it,” Canada coach Tim Hunter said. “Because next game, you don’t have a gimme where you can lose a game and still move on.”

Glass, who was selected by Vegas with the No. 6 pick in the 2017 NHL Draft, gave Canada a 1-0 lead after forcing a turnover in Russia’s zone 2:20 into the first period.

Denisenko, selected by Florida with the No. 15 pick in the 2018 NHL Draft, tied it 1-1 on a power play at 5:21 after Morgan Frost (Philadelphia Flyer) received a two-minute penalty and 10-minute misconduct for checking from behind.

Kochetkov (2019 draft eligible) made his best save of the game at 4:24 of the second period, stopping Max Comtois (Anaheim Ducks) with his left pad on a backdoor chance.

Rasmus Sandin, a first-round pick (No. 29) in the 2018 NHL Draft by the Toronto Maple Leafs, had two goals and an assist to help Sweden earn the top seed in Group B with a 4-1 win against Kazakhstan at the 2019 IIHF World Junior Championship at Save-On-Foods Memorial Centre in Victoria, British Columbia, on Saturday.

Emil Bemstrom (Columbus Blue Jackets) and Nils Lundkvist scored, and Olle Eriksson Ek (Anaheim Ducks) made 10 saves for Sweden (3-1-0-0), which was without five players because of a stomach virus and will play Switzerland in the quarterfinals in Victoria on Wednesday.

Sweden won its 48th straight preliminary-round match at the World Junior Championship. It last lost 3-2 in overtime against the United States on Dec. 31, 2006, at the 2007 WJC.

Martin Necas (Carolina Hurricanes) had a goal and an assist, and Lukas Dostal (Anaheim Ducks) made 19 saves for the Czech Republic in a 4-0 win against Denmark in Group A at the 2019 IIHF World Junior Championship at Rogers Arena in Vancouver, British Columbia, on Monday.

Jakub Lauko (Boston Bruins), Martin Kaut (Colorado Avalanche) and Filip Kral (Toronto Maple Leafs) also scored for the Czech Republic (1-1-0-2), which got its first regulation win and passed Switzerland to finish third in the group. The Czech Republic will play the United States in the quarterfinals on Wednesday.

Mads Sogaard, a B-rated goalie on NHL Central Scouting’s players to watch list for the 2019 NHL Draft, made 30 saves for Denmark (0-0-4), which became the first team to not score a goal in the preliminary round since the tournament switched to its current 10-team format in 1996.

Denmark will play Kazakhstan in a three-game series to avoid relegation in the 2020 WJC.

Czech Republic defenseman Michael Gaspar (2019 draft eligible), left on a stretcher after a collision into the side of his net early in the third period.

“The doctors took him to the hospital and he went through some tests and examinations and it looks like it’s the lower side of the ribs that is damaged,” Czech Republic coach Vaclav Varada said. “We don’t know how long he is going to be (out). Michael is feeling better, but we kept him there for another examination that’s going to decide if there is some damage inside the stomach or around it.

“For now, we are down to 6 [defensemen] and we will see how Michael is feeling by tomorrow.”