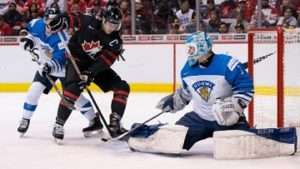 Finland rallies past Canada in OT in quarterfinals


Toni Utunen (Vancouver Canucks) scored 5:17 into overtime to give Finland a 2-1 win against Canada in the quarterfinals at the 2019 IIHF World Junior Championship at Rogers Arena in Vancouver, British Columbia, on Wednesday.

Canada defenseman Noah Dobson (New York Islanders) broke his stick on a one-timer and Utunen scored on the ensuing rush with a wrist shot glove side from the right face-off dot.

“I am just starting to realize what I just did,” Utunen said. “It felt amazing. It was my first goal this season (plays for Tappara in Liiga). A huge goal for me and even bigger for our team.”

Aleksi Heponiemi (Florida Panthers) tied it 1-1 with 47 seconds left in the third period, and Ukko-Pekka Luukkonen (Buffalo Sabres) made 24 saves for Finland, including stopping Max Comtois (Anaheim Ducks) on a penalty shot 1:14 into the 4-on-4 overtime.

Finland will play Switzerland in the semifinals here on Friday.

“As a coach, there is no better situation in the world, to play against Canada and [defeat] them on their home soil,” Finland coach Jussi Ahokas said. “Everything, a [penalty shot] in overtime and then you win yourself. You can’t really write better drama than that.”

Michael DiPietro (Vancouver Canucks) made 32 saves and Ian Mitchell (Chicago Blackhawks) scored for Canada, which won the gold medal in 2018.

“We deserved a better fate,” DiPietro said. “Sometimes you are going to get the bounce in the game and sometimes you’re not. But for the game to end like that, it’s disappointing. For our group, it’s a tough pill to swallow.”

It is the first time Canada has failed to win a medal as host of the tournament (13 times as host, once co-host with United States) and the second time in past 21 years it won’t play for a medal. It lost in the quarterfinals in the 2016 WJC, also to Finland.

It is also the fourth time in the past seven years Canada won’t medal and assures it won’t play the United States at any point in the tournament for the first time since the 2005 WJC.

“It’s a tough loss,” Comtois said. “Canada is never expected to go that early, but it was a good battle out there. This tournament is about a fine line winning and losing.”

Mitchell gave Canada a 1-0 lead at 1:30 of the second period. Barrett Hayton (Arizona Coyotes) sent a pass from his knees to Mitchell, who scored with a quick wrist shot over Luukkonen’s glove from just inside the right face-off dot.

Luukkonen, selected in the second round (No. 54) in the 2017 NHL Draft, stopped Brett Leason on a breakaway with 5:10 remaining in regulation before Eeli Tolvanen sent a shot from behind the net that deflected off Heponiemi into the net to tie it 1-1 with an extra skater on the ice.

Finland defenseman Ville Heinola, a B-rated skater in NHL Central Scouting’s Players to Watch list , left the game with 5:19 left in the second period after a hit by Comtois.

Jack Hughes had an assist in his return for the United States in a 3-1 win against the Czech Republic in the quarterfinals of the 2019 IIHF World Junior Championship at Save-On-Foods Memorial Centre in Victoria, British Columbia, on Wednesday.

Hughes, an A-rated skater in NHL Central Scouting’s Players to Watch list and the projected No. 1 pick in the 2019 NHL Draft, had missed the past three games with an undisclosed injury.

“It was a lot of fun to be back on the ice with the boys and we played a really good game, so it was really good for our team,” Hughes said. “I thought I was ready to play a couple of days ago (prior to Finland game), but it was good to feel better each and every day and I feel good now, so that’s all that matters.”

Noah Cates (Philadelphia Flyers), Josh Norris (Ottawa Senators) and Alexander Chmelevski (San Jose Sharks) scored, and Cayden Primeau made 18 saves for the United States, which will play the Russia/Slovakia winner in the semifinals in Vancouver, British Columbia, on Friday.

“We have great offensive guys, but it just didn’t work out,” Kaut said. “Filip Zadina didn’t score a goal (in the tournament). It’s not normal for him. We took just 19 shots and the USA had 41 in this game, and that’s not normal for us. Now we’re out so I’ll be coming back to the American Hockey League (Colorado) soon.”

Cates gave the United States a 1-0 lead at 12:12 of the first period, taking a pass from Hughes and scoring with a backhand.

Norris made is 2-0 when he controlled a lead pass from Jason Robertson (Dallas Stars) and scored on a breakaway at 6:10 of the second period.

The United States is 11-7 in the WJC quarterfinals (5-1 against Czech Republic) and has won five straight playoff games against the Czech Republic.

“I don’t think we’re peaking but getting on the right track” Norris said. “I think confidence is really high and the guys trust each other a lot right now. The biggest thing is we’re playing well defensively and going into these medal rounds, that’s really big.”

Luca Hollenstein made 41 saves for Switzerland in a 2-0 win against Sweden in the quarterfinals at the 2019 IIHF World Junior Championship at Save-On-Foods Memorial Centre in Victoria, British Columbia, on Wednesday.

It was Hollenstein’s second shutout of the tournament (4-0 win against Denmark in preliminary round). He has a 0.66 goals-against average and .978 save percentage in three games.

Forwards Yannick Bruschweiler and Luca Wyss scored for Switzerland, which was the fourth seed in Group A after going 1-0-1-2 in the preliminary round. It will play the Canada/Finland winner in the semifinals in Vancouver, British Columbia, on Friday.

“I think we knew from the beginning of the tournament that we could beat any team, and we saw it in our preliminary round games when we got more comfortable and now it worked out for us,” Bruschweiler said.

Samuel Ersson (Philadelphia Flyers) made 33 saves for Sweden, which entered the game as the top seed in Group B after going 3-1-0-0 in the preliminary round. The loss was its first in the quarterfinals since 2006 (Finland).

“They work really hard and we couldn’t compete at the same level,” Sweden coach Tomas Monten said. “We lost our tempo with the puck, which happened against Slovakia and then the last two periods against Kazakhstan. [Switzerland] did a remarkable job defensively and we had two breakaways. You have to score on those chances if you want to win a tight playoff game.”

Bruschweiler scored on an end-to-end rush to give Switzerland a 1-0 lead at 15:23 of the first period. Wyss poked in a loose puck at the right post to make it 2-0 at 13:59 of the second period.

Hollenstein, who is making his first appearance for Switzerland at the WJC, made 19 saves in the third period to preserve the lead.

Klim Kostin (St. Louis Blues) scored two goals and Pyotr Kochetkov made 32 saves for Russia in an 8-3 win against Slovakia in the quarterfinals at the 2019 IIHF World Junior Championship at Rogers Arena in Vancouver, British Columbia, on Wednesday.

Kochetkov, who wasn’t ranked in NHL Central Scouting’s Players to Watch list in November, got the start ahead of Danil Tarasov (Columbus Blue Jackets) after making 30 saves in a 2-1 win against Canada on Monday.

Russia, which has won all five of its games after going 4-0-0-0 in the preliminary round, will play the United States in the semifinals here on Friday.

Grigori Denisenko (Florida Panthers) had one goal and two assists, Alexander Alexeyev (Washington Capitals) had a goal and an assist, and Alexander Romanov (Montreal Canadiens) and Nikolai Kovalenko (Colorado Avalanche) each had two assists. Defenseman Ilya Morozov and forwards Nikita Shashkov, Stepan Starkov and Kirill Slepets, who are each eligible for the 2019 NHL Draft, also scored for Russia.

Martin Fehervary (Capitals), Milos Roman (Calgary Flames) and Michal Ivan scored for Slovakia. Samuel Hlavaj was pulled after allowing three goals on six shots in the first period. He was replaced by Juraj Sklenar, who made 19 saves in relief.