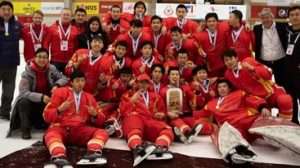 The Chinese U20 national team celebrates after winning the Division III in the third attempt.

China defeated Australia Sunday night by a score of 5-1 to take home the gold at the 2019 IIHF Ice Hockey U20 World Championship Division III. The Chinese team, coached by IIHF Hall of Famer Jakob Kolliker, was dominant throughout the tournament, outscoring their opponents 49-5 on route to a perfect record.

China will now advance to Division II Group B for 2020, an important success for the Chinese Ice Hockey Association, who is in the middle of a push to rapidly improve their hockey program ahead of the 2022 Olympic Winter Games on home ice in Beijing.

This win comes after the team was edged out from advancement in 2017 and 2018. When asked what he thought pushed them over the edge, Kolliker pointed to their disciplined play.

“The team worked hard. They were disciplined the whole tournament,” the former U20 national team coach of Switzerland said. “I think that was the key – working and discipline. They stayed in the range, and I’m happy about this… I’m happy we can end the week like this, with a medal.”

China’s players dominated the scoring leaderboard, claiming the top-five spots for total points, and throughout the tournament, it was clear that their skill, speed, and conditioning were all at a level unmatched by their competition. Yan Juncheng topped tournament scoring with seven goals and 13 assists in five games, and also tied for a tournament-best +19.

In goal, the Chinese duo of Wu Siming and Zhang Yuhang were the stingiest in the tournament, allowing only a single goal in each of the team’s games. Goaltending coach Pasi Hakkinen noted that while his goalies may not have been busy, “they did their job every time we needed them to make a save, so we’re pretty happy about that.”

China opened the scoring in the gold medal game 6:21 into the first when Yan Juncheng took advantage of a turnover, broke in alone and scored blocker-side on Australian goaltender Seb Woodlands. 33 seconds later Wang Jing found a hole on the short-side from a bad angle to make it 2-0. China added a third goal in the second period, shelling Woodlands while giving up few if any real scoring chances on their own end. Halfway through the third period, China had expanded their lead to 5-0, until Australian defenceman Hayashi Kenshin blocked a point shot on a Chinese power play and raced in on the Chinese goal under pressure, tucking a deke five-hole on Wu Siming for the shorthanded goal.

While the Australian team certainly would’ve preferred gold, their strong second-place finish marks a major improvement over 2018, when the team lost three of their five games after being relegated out of Division IIB in 2017. While they didn’t have many high-quality scoring chances throughout the game, they were the only team to hold the high-octane Chinese offence to under six goals, cheered on by a crowd of fans bested in size only by the home team. When the final buzzer sounded, Woodlands and backup goalie Ethan Splede had turned away 45 of 50 shots in a heroic, albeit doomed effort.

Bronze medallist Turkey returned to Division III in 2019 after playing in Division IIB in 2018. They finished the tournament 3-2, including a 12-1 loss to China in the semi-finals, but were able to shake off that loss and put in a strong performance to secure the bronze in a 6-0 win against neighbouring rival Bulgaria. Sait Bingol netted four of Turkey’s six goals, and goaltender Burak Gumuslu turned away 27 shots on route to the shutout – aided in-part by the absence of Bulgaria’s top-scorer, Miroslav Vasilev, due to suspension.

Bulgaria looked exceptionally strong in the preliminary round with a 20-7 goal record, thanks in part to notable play from Vasilev, defenceman Kaloyan Vachkov, and goaltender Ivan Stoynov. They had their eye on a run to the gold medal game but lost to Australia in the semi-finals in what was easily the most well matched and exciting game of the tournament. The final score was 7-4, but the game was extremely tight, with Australia netting their game-winning fifth goal deep in the third with only 3:01 left on the clock.

Despite being forced out of medal contention, the Icelandic team delivered a strong showing in front of their home crowd, including an overtime win against Australia in their opener. In the end, they lost only one game – a 4-2 heartbreaker against Turkey. A win in that game would have secured Iceland first place in Group A, but with the loss, they instead fell to third in the group. Despite that disappointment, the tournament was a success not only for the team but for the host organisation, Ice Hockey Iceland.

“I believe all teams go home satisfied with the tournament, so everything worked out,” said Ice Hockey Iceland general secretary Konrad Gylfason. “And this was a big tournament – 8 teams – so it was even tougher for us, but still, everything went very well.”

Chinese Taipei dropped their first three games in the preliminary round but picked up a 7-1 win against South Africa in the placement semi-finals. Despite the lopsided record, Chinese Taipei’s goalie, Huang Sheng-Chun, was a standout. He posted an impressive 93.7 save percentage, edged out only by China’s Wu Siming at 93.9. Huang also averaged 47.8 saves per game, a tournament best, earning him the award for top goalie.

The award for top forward went to Iceland’s Heidar Kristveigarson, who was the tournaments second top goal scorer, with eight goals in five games. Top defenceman went to China’s Zhang Dehan, who was fourth in total scoring with one goal and fourteen assists.