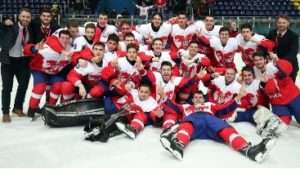 After last year’s silver on home ice, the Serbian U20 national team won it all in neighbouring country Croatia at the 2019 IIHF Ice Hockey U20 World Championship Division II Group B

It was a sense of ‘mission accomplished’ for Serbia. A year ago, on home ice, the team missed out on promotion due to an overtime loss against eventual group winner Spain. Twelve months later, there was no mistake. Several players from the 2018 team were available once again and their experience was a big factor in Serbia’s success here.

Those returnees included captain Andrija Spanjevic, who collected the top defenceman award after contributing six assists in five games. Marko Dragovic, the tournament’s top forward and leading goalscorer with 10 (7+3) points was also part of last season’s roster. Those two formed part of an 11-strong contingent from Crvena Zvezda Belgrade. Serbia’s 29th-place overall finish in the U20 World Championship program is the best placement since 2006.

Head coach Perowne, a Quebec-born naturalised Serb whose first engagement in the Balkans was back in 2001 as a forward with Vojvodina Novi Sad, was also back for a second year. His commitment to growing hockey in the region also inspired him to help establish Hockey Without Borders, an organisation that places volunteer coaches in a range of countries across the former Balkans and beyond to the Baltics and as far as India.

Serbia went into Monday’s play knowing that victory over the Dutch would clinch top spot, although a defeat could set up a three-way tie involving Croatia as well. For the Netherlands, it was win or bust and the Oranje struck first through Wouter Sars in the seventh minute. Serbia replied quickly through Lazar Pejcic, another returnee from 2018, and went in front late in the first frame on a power-play goal from Srdjan Subotic. Dragovic potted his seventh of the tournament in the second period as Serbia extended its lead to 4-2 before Subotic and Mirko Djumic scored their second goals of the game to complete a 6-2 scoreline.

Earlier in the tournament, Serbia overcame host Croatia 4-1 in front of a raucous crowd of over 2,000 fans in Zagreb’s Dom Sportova. The host made a slow start and might have allowed more than a fifth-minute goal from Vasilije Andjelkovic as Serbia dominated the opening session. The middle frame was tighter, but again the Serbs found the net through Petar Mirkov late in the frame. Two quick goals from Dragovic and Subotic killed the game early in the third, the latter converting a 5-on-3 power play after captain Spanjevic carefully quarterbacked the play; Patrik Dobric mustered a late consolation for Croatia.

The host nation finished with silver medals, moving ahead of the Netherlands on the final day thanks to a 2-1 win over Israel. The Israelis also had something to celebrate after securing fifth place in the pool and preserving their place for next season. Last year’s Division III champion ensured its survival with an impressive 5-1 victory over Mexico led by two goals and an assist from Yuval Halpert. Mexico failed to record a single victory and drops to the basement division for 2020. Belgium, which survived after coming out ahead in a three-way tie for the last three places 12 months ago, improved to collect two victories in Zagreb and stood clear in fourth spot.

Croatia’s Dominic Canic led the scoring chart with 11 (2+9) points, one ahead of Dragovic and Sars, who tied for second with identical 7+3 returns. Djumic also collected 10 points, with three goals and seven assists. While Serbia picked up the awards for the tournament’s best defenceman and forward, Croatia’s goalie Domagoj Troha was nominated as the best netminder.