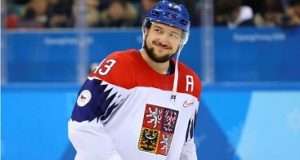 Czech forward Jan Kovar is all smile after scoring a goal. The Czechs won the Sweden Hockey Games during the February International Break.

A busy program of international saw the Czech Republic win the Swedish stage of the Euro Hockey Tour for the first time in 25 years, while Gangneung staged a hockey celebration to mark the first anniversary of last year’s Winter Olympics.

Stage three of the Euro Hockey Tour saw the Czech Republic take the honours thanks to victories over Finland and Sweden. Milos Riha’s team wrapped up first place in the tournament after just two games and could afford a 1-3 loss against Russia on Sunday. It was the country’s first tournament win in Sweden for 25 years.

The Czechs were boosted by the return of Jan Kovar. The two-time Gagarin Cup winner began the season in North America, but after failing to win a place with the Islanders line-up and going through a trial with the Providence Bruins in the AHL, he returned home to play in the Czech league and is available for selection once again. He made an instant impact on his return, scoring a hat trick in Thursday’s 5-2 win over Sweden. However, the HC Plzen forward didn’t have everything his own way. In Saturday’s game against Finland he took a game penalty late in the Czechs’ 3-1 win. By prior arrangement with his club, Kovar did not play against Russia; Plzen team-mate Milan Gulas and Ak Bars forward Jiri Sekac were also rested.

Head coach Milos Riha had mixed feelings about the team’s overall performance at the tournament – and especially the way several players failed to take the chance to impress in the final game against Russia. “I expected that the guys who stayed here would want to show more,” Riha said after that match-up. “I was disappointed with that. But both Hynek and Tomas Zohorna did well – they took their chances while some of the others underperformed, especially the youngsters.”

Russia took second place, with 20-year-old netminder Ilya Konovalov earning the prize for best goalie of the tournament after backstopping both Russian wins. The Lokomotiv Yaroslavl prospect secured a shootout win over Finland and stopped a penalty shot from Marek Kvapil during the game against the Czechs. Head coach Ilya Vorobyov said: “Overall, we got two victories in this tournament and we ran the rule over several new guys. Now we’ll go away and look at all the information we’ve collected. There’s still a long way to go before the World Championship. We’ve got part of the regular season and the whole of the playoffs. After that, we’ll shuffle the pack once again.”

Finland finished the weekend with a shootout win over Sweden following a 4-4 tie in an entertaining tournament finale. However, Tre Kronor took third place, one point ahead of its Nordic neighbour. Russia remains out in front in the overall Euro Hockey Tour standings, six points ahead of second-placed Finland.

This year’s World Championship host nation, Slovakia, continued its preparations with victory in the Kaufman Cup in Bratislava. Craig Ramsay’s roster started with a 2-1 shootout win over Belarus after a late tying goal from Radovan Pulis took the game into the extras. Then on Saturday, Slovakia defeated Russia B-team 5-1 with 20-year-old forward Samuel Bucek leading the way with two goals. The HC Nitra youngster made his international debut at the tournament. The other game in the three-team contest saw the Russians edge Belarus 2-1 thanks to goals from Vladimir Tkachyov and Alexander Khokhlachyov.


year after the Winter Olympics, international hockey returned to PyeongChang with a special four-team Legacy Cup followed by a three-team women’s tournament going on now. The men’s competition ended with Kazakhstan taking top spot ahead of Latvia, while Korea finished third thanks to a 2-0 win over Japan. Goals from Eric Regan and Sangjin Park secured that win against Korea’s biggest rival. For Kazakhstan, the tournament was a useful warm-up for next month’s Winter Universiade, with the team selecting a relatively youthful roster and leaving the KHL players of Barys Astana at home. Kazakhstan will then in April host the 2019 IIHF Ice Hockey World Championship Division I Group A.

For Korea, meanwhile, the competition represented the start of a new era. Jim Paek’s team called on just three of the seven dual-nationals who played at the Olympics and took the opportunity to welcome several youngsters to the roster.

One of the veteran dual nationals, goalie Kevin Dalton, is looking forward to seeing the next generation develop like the group that won promotion to the World Championship elite and represented the country at the Olympics. “It reminds me a lot of when we started. We had a lot of good players but we hadn’t really had coaching,” Dalton told the Korean Times. “We have these guys that are excited to be here. They have a lot of energy, but they haven’t really played a lot. Once they start to get the experience, it’s going to be like the process that we had before. I feel like they’re going to start taking on roles of the older guys that were here before.”

Read more about the 2018 Olympics’ legacy in Korea and beyond here.

Kazakhstan went up 3-0 against both Japan and Korea to eventually win the games against the Asian rivals 5-2 and 5-1 respectively. Arkadi Shestakov and Nikita Leshenko scored Kazakhstan’s goals in the deciding game for first place. Kazakhstan had the upper hand for most of the game with a 40-29 shot-on-goal advantage against Latvia but Rudolfs Maslovskis tied it up in the third period. Anton Nekryach scored Kazakhstan’s game-winner at 3:07 of the overtime period.

At the Osterreich Cup in Klagenfurt, three nations finished tied on six points. Denmark claimed first place ahead of Austria and Norway by the narrowest of margins – just a single goal in the three-way head-to-head put the 2018 IIHF Ice Hockey World Championship host on top. Austria took second place thanks to a 2-0 victory over Norway in its final game. France completed the group but failed to win a game in the competition.

The Euro Challenge tournament in Slovenia ended with the host nation on top. Victories over Hungary (4-1) and Italy (2-1) gave the home team an unassailable advantage in the four-team tournament and even an overtime loss to Belarus B in the closing game could not deny Slovenia gold. Italy came second thanks to a 1-0 overtime win over third-placed Hungary, with Belarus ending in fourth despite that last-day win.

The week’s other exhibition games saw Germany and Switzerland play two B internationals, with honours shared between the two countries. The Germans enjoyed a 4-2 victory in Memmingen on Tuesday, but the Swiss responded with a 5-2 success in Bietigheim the following day. Romania surprised with a tournament win thanks to victories against higher-seeded Poland and host Ukraine. Great Britain defeated Dinamo Riga 3-1 on Wednesday in its first warm-up game ahead of the World Championship.