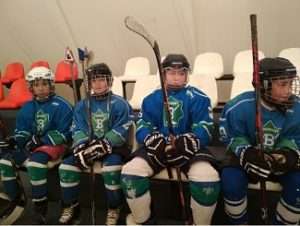 Fans hope that team Binokor will revive the winter sport’s fortunes in a nation not often associated with cold weather.

It is 8 o’clock in the morning at an ice rink in Uzbekistan’s capital, Tashkent, and little can be heard over the shouting, scraping skates, smacking pucks and the ref blowing on his whistle. It is training time for kids at Binokor, a hockey club with a complicated past and, its supporters believe, a hopeful future.

When the club appeared in 1971, it was a sensation. Tashkent was the southernmost city on the planet to host an ice hockey team. Seventeen years later, the team folded.

And then, in 2012, the club was brought back to life. Management hopes Binokor will revive the winter sport’s fortunes in a nation not often associated with cold weather.

One of the loudest voices heard at the Binokor rink is that of chief trainer Alisher Azimov, one of only a few people in Uzbekistan to have made a living playing hockey. It is thanks to Azimov that the sport has received another lease on life.

“When I came back to Tashkent in 1989, after doing my service in the Soviet army, Binokor had already ceased to exist. And my dreams of becoming a hockey player disappeared along with it. I was devastated, in shock. Our majestic and luxurious ice palace lay empty. I kept going back there for a long time hoping to hear any encouraging news about my team,” Azimov told Eurasianet.

Binokor’s director Abdumadjid Nasirov got into hockey when he was just nine years old. He spent his childhood honing his game at Binokor, but he too never got to play with the club.

“In the year before [doing my military] service, I was already training with the first squad,” Nasirov said. “After two years, I came back from the army, and there was already no Binokor.”

There is a well-established narrative about the ways in which the Soviet Union used sport to make a political point – to demonstrate the superiority of the socialist system over their capitalist rivals.

But away from the global stage, there was an equally ferocious rivalry between the various republics within the union. Teams from Kazakhstan and Uzbekistan in particular would vie for primacy among the Central Asian republics.

So in soccer, for example, the Kazakh SSR’s capital, Alma-Ata, got its own club, Kairat, in 1954. Tashkent’s Pakhtakor appeared two years later, in 1956.

It was a similar story with hockey, one of the Soviet Union’s most beloved sports. The first competitive hockey tournament in the neighborhood took place in Kazakhstan in January 1956. Unwilling to allow the Kazakhs to claim all the glory, the first secretary of the Communist Party in the Uzbek SSR, Sharaf Rashidov, ordered the construction of what he insisted should become Central Asia’s finest ice-sports venue.

In 1970, that area, built near a university campus in Tashkent, opened its doors. As it was inaugurated in the year of the 100th anniversary of the birth of Bolshevik leader Vladimir Lenin, the arena was called Jubilee.

Major Moscow teams like CSKA and Spartak were among the many that turned up for the opening ceremony. Before then, the closest most Uzbeks had seen of a hockey player was on their TV screens.

A Tashkent hockey team called Spartak was formed in 1971. It was renamed Binokor – Uzbek for “builder” – in 1973. Jubilee became the club’s home.

There were few Uzbek players to begin with. The backbone of the club was made up of athletes from other Soviet republics. As interest mounted, hundreds of local boys were developed through the local training system. It was still hard though.

“To be honest, the Russian trainers preferred to send their own guys, the incomers, onto the ice. Of course we were indignant about this. We wanted to play!” said veteran hockey player Sabir Alihojayev.

Alihojayev caught his trainers’ attention when he was only nine. He got to play for Binokor for two seasons.

It was the death of Rashidov, the longest enduring Soviet-era ruler of Uzbekistan, that spelled the beginning of the end for Uzbek hockey. With the loss of their main patron, Binokor limped on for another five years.

The Jubilee arena would suffer an even greater indignity. In the early years of Uzbekistan’s independence, the main section of arena was turned into an exhibition hall. The training area became a wholesale market. Dozens of talented hockey players hung up their skates.

In the early 2010s, a group of hockey fanatics decided to revive not just Binokor, but the sport itself.

“I lived for 20 years without hockey. In 2008, I moved to the United Arab Emirates for work. I was amazed when I learned that there was ice hockey even in this hot country. I played with some old-timers, and then in the first league, and finally in the professional Emirates Hockey League,” Azimov, the chief trainer, said.

The vast majority of EHL players are from Canada or Europe. With his two-year stint in the professional ranks, it felt like Azimov had achieved his dream.

This was only the start, however.

Azimov immediately returned to Uzbekistan when he heard news that Tashkent was about to get a new ice rink.

Jumping forward a few years, to March 2018, and Uzbekistan saw the creation of a National Hockey Federation. In addition to its adult squad, Binokor has several youth teams in various age groupings.

“Having an internal league is a basic requirement to join the IIHF – the International Ice Hockey Federation,” said Nasirov, Binokor’s director. “But for that, we need the right infrastructure: ice arenas, training facilities and other things. There are now four Tashkent clubs playing on a rink in the park.”

That field is 50 meters by 25 meters, way below the IIHF-mandated standard of around 61-by-30 meters.

Luckily, hockey in Uzbekistan has found a new and important champion in another national leader – President Shavkat Mirziyoyev. In 2017, Mirziyoyev ordered construction of a new, large arena.

The project for the Humo Arena envisions a 12,000-person stadium with another smaller venue attached that will be able to seat 300 spectators. Similar undertakings are planned for other cities, including Samarkand, Andijan and Qarshi. Work is expected to be complete by the end of 2018.

But perhaps the greatest brake on development of hockey in Uzbekistan is the sheer expense. A full outfit, from uniform to skates, can cost parents upward of $500. The hockey federation is helping younger players by underwriting the cost of traveling to international competitions.

Russian journalist Oleg Dmitriyev, who regularly comments on hockey in his own country, believes all the same that Uzbekistan has good chances of reviving the sport.

“It will be very interesting to see Binokor revived. The Uzbek team will play in the Continental Hockey League [KHL], like Barys from Astana [in Kazakhstan] does,” he said.

Dmitriyev suggested China as a good model of what could be done if the funding can be found.

“Of course you won’t be able to get by without legionnaires. In China, you have Belarusians, Swedes, Finns and Canadians with a Chinese background,” Dmitriyev said. “There is enough money to go around in Tashkent.”

Back at the training session, 70-year-old Jahongir Tajibayev is watching from the sidelines with his grandson, Maruf. Tajibayev recalls fondly how he would go to watch Binokor play.

“I had always wanted to see Binokor play in the higher leagues, the same as Pakhtakor did in soccer,” Tajibayev said. “Now I dream of seeing a new Binokor. I dream of seeing my grandson play in this team with Canadians, Americans, Russians and Czechs.