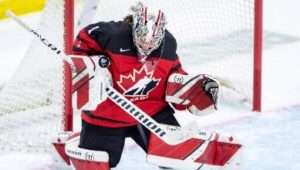 Goaltender Shannon Szabados, seen at the Four Nations Cup in November, made 38 saves to help Canada to a 2-0 win over the United States in the deciding game of the inaugural Rivalry Series on Sunday in Detroit

The inaugural Rivalry Series was created to give Canada and the United States another opportunity to put the world’s best female hockey teams on the ice together.

It went so well, there likely will be a sequel.

Brianne Jenner and Blayre Turnbull scored, Shannon Szabados made 38 saves, and the Canadians beat the Americans 2-0 in front of 9,048 fans Sunday in Detroit to win the three-game series.

“It always means a lot when you play these guys and there’s no love lost on the ice, so to get a win in their barn felt pretty good,” Jenner said.

Gina Kingsbury, director of women’s national teams for Hockey Canada, declared the event was a success in every way.

“We would love to see this repeat itself every year for sure,” Kingsbury said. “It would help generate excitement about our game outside of Olympic years.”

The Canadians beat their rivals nearly a year after the U.S. won Olympic gold in a shootout thriller and a few months after it won the Four Nations Cup against them.

They will meet again in April at the world championship in Finland.

“That’s the hardest part,” Alex Rigsby said after making 15 saves for the Americans. “You come off a loss and now we have to wait another six, seven weeks until we play each other again.”

The top U.S. and Canadian teams have not played regularly outside of the Olympics, world championship and Four Nations Cup, but that will change if the Rivalry Series becomes an annual event.

“It fits really well with our program,” USA Hockey executive director Pat Kelleher said. “And, it’s good for us to have the NHL involved as well.”

The league supported the event that USA Hockey collaborated with Hockey Canada to conceive, making the arenas used by the Detroit Red Wings and Toronto Maple Leafs available along with promoting the event. That likely helped an average of 8,725 spectators attend the first two games and for even more people to show up in the Motor City for a game that started at noon.

“We couldn’t be more thankful for the Red Wings and the NHL to help us out,” American forward Brianna Decker.

Fans filled almost the entire lower bowl of Little Caesars Arena where scores of girls in hockey jerseys could be seen and heard.

“There’s always more and more young girls watching and you can hear them in the crowd,” U.S. forward Dana Trivigno said. “You’re their role models and you’re what they aspiring to be. We’re just trying to create a path for them to follow and do the same thing.”

And as usual, the women helped their cause to market the game by playing highly competitive games.

The U.S. won the opener 1-0 on Tuesday in London, Ontario, and Canada evened the three-game series with a 4-3 victory Thursday in Toronto.

The Americans generated a lot of offence in the finale, especially during goal-mouth scrambles during a 21-shot second period and in the final minutes. Savannah Harmon had a goal for the Americans negated by a crease violation early in the third period when Trivigno made contact with Szabados.

“Canada plays a physical game so I was trying to get to the net and create some havoc in front,” Trivigno said. “I bumped off one Canadian and got into the goalie and couldn’t get off her quick enough. Unfortunately, that was enough to make it goaltender interference.”