Hollywood to hit the ice? North Pole to host hockey match for global celebrities in 2020 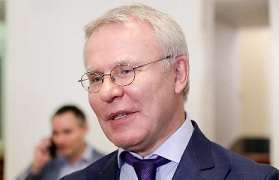 According to earlier reports, Fetisov, who is a two-time Olympic ice hockey champion and former NHL player, discussed the idea to hold ice hockey matches at the North Pole with Russian Sports Minister Pavel Kolobkov.

“The current global climate situation is unfavorable,” Fetisov told reporters. “I got the idea to bring together famous athletes, Hollywood stars, politicians and public figures to play ice hockey, sending a message to the world about how serious the situation is,” he added.

“Today, the climate issue is what can unite people and get them to leave all political, regional and other kinds of conflicts behind… Unfortunately, we were unable to arrange a game this year due to lack of time but it will happen in April next year where we planned it [at the North Pole],” Fetisov emphasized.

According to him, in order to arrange such a game, coordination with environmentalists would be needed. As for now, the organizers have secured the support of the global academic community and mapped out the logistics. “Yet, we haven’t had enough time to bring together the celebrities,” Fetisov noted.