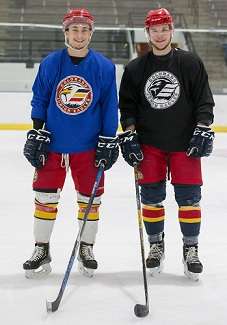 By Terri Frei – The tribune

In fact, theirs are not the sorts of stories you expect to hear as you pass through the city of Greeley’s downtown rink, the Ice Haus, and sit down to chat with a pair of 20-year-old hockey players in the lobby, before lunch.

Both of their families immigrated to Israel from parts of the former Soviet Union.

Revniaga’s father, Edward, had been a well-known hockey player and coach in Latvia, his Baltic homeland. Revniaga’s mother came from Belarus.

Kozev’s parents came together to Israel from Siberia in 1995.

Revniaga and Kozev were born only 20 days apart in September 1998 — and both in Nahariya, a city of about 57,000 on the Mediterranean Sea near Israel’s northern border with Lebanon.

In Nahariya, they lived a 15-minute walk apart and met in first grade.

Given the lack of rinks in Israel, especially in their home region, they had to scramble, scrounge and make the best of limited ice time and opportunity for development, and for several years were teammates on Israel’s national age-group teams competing in the lower classifications of World U-20 and U-18 tournaments.

In the 2018-19 season, they have wound up in Greeley. Greeley, as in Greeley, Colo. Together. Playing hockey.

Revniaga, a center-right wing, and Kozev, a defenseman, are finishing up their junior eligibility this season with the Greeley-based Northern Colorado Eagles, a Tier II Junior A team in the Western States Hockey League, and are hoping to move on to college hockey — whether in the U.S. or Canada — in 2019-20.

These Eagles, not to be confused with the Loveland-based Colorado Eagles, now in the American Hockey League, are winding down their first season in the Ice Haus after making the short move from Windsor last summer.

After winning two of three in a weekend set against the Dallas Snipers at the Ice Haus, the Eagles will move on to the league’s Thorne Cup playoffs.

These Eagles, with long-time former Colorado Eagles winger Steve Haddon in his sixth season as the junior franchise’s coach and general manager, finished 29-19-2 in the regular season and in third place in the Mid-Western Division.

Their top scorer, Russian Nikita Sheberov, departed the team recently. That left Revniaga, who had four goals in the three weekend games against Dallas, as their top offensive threat. He finished the regular season with 23 goals and 55 points in 41 games.

Kozev is a stay-at-home defenseman still shaking off some of the cobwebs after missing all of last season. He wasn’t hurt. He was serving his mandatory year in the Israel Defense Forces, aka, the Israeli Army.

“I got drafted,” Kozev said — and he didn’t mean by a hockey team.

“The first seven months I was a combat soldier for the home command search and rescue division,” Kozev explained. “When there was no life-threatening situations, we were doing border control. If war had happened, we would have been helping civilians, rescuing them from buildings that fell apart from rockets, and helping our soldiers that got trapped, that sort of thing. But I didn’t have to do that. I was only in training.” 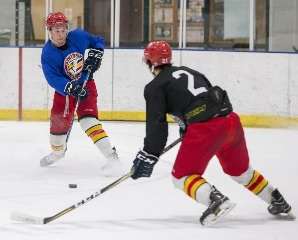 Mark Revniaga, left, works for a shot during the Northern Colorado Eagles’ practice Thursday at the Ice Haus.

The Eagles’ website now lists their roster as 11 Americans, five Canadians … and the two Israelis who at times can appear raw, which is understandable considering the amount of full-rink practice time they had growing up was minuscule compared to North American prodigies.

Neither Nahariya nor Israel is a hockey hotbed.

Edward Revniaga was in his twilight as a player when he came from Latvia to Israel in 1996, but starred for some national teams against lower-tier international competition.

“He kept coaching when I was growing up,” Mark Revniaga said. “I loved the game ever since I was a kid.”

That’s not a throwaway line. It apparently requires considerable passion for hockey to stick with it in Israel.

“There is no hockey in Israel, basically,” Revniaga said. “There’s one big rink in Israel where you can actually play. That was in Mettula, right on the border. It was an hour and a half away, and it was hard to drive there. You could see Lebanon from there. I skated there for two years. I also practiced in a smaller rink, maybe the size of one zone, maybe even smaller, in Ma’alot. That was 20 minutes from my house. That was easier. We skated there twice a week.

“And we had inline hockey, because we didn’t get enough ice and had to skate on roller blades to be better.”

So how could he develop as a player under those conditions?

“It’s only because of my dad,” Revniaga said. “He invested a lot of time and effort to make guys like me better. When you turn 13 in Israel (bar mitzvah age), that’s when you’re growing up and in hockey that’s when you have to work on your skating skills. For a year, we barely touched the puck. That was hard and frustrating, but I’m glad my dad made it about the effort. He made us better and gave me the ability to come to America and play hockey and achieve my goals.” 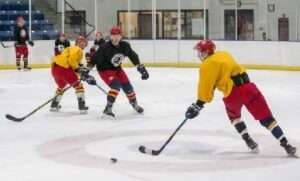 Denis Kozev, in black at center, works on defense during the Northern Colorado Eagles’ practice Thursday morning at the Ice Haus in Greeley.

Kozev got started later than Revniaga.

“Around the age of 7, I started playing inline hockey, and (Revniaga’s) dad coached us,” Kozev said. “If he hadn’t been there coaching in northern Israel, I would not be in the place I’m at now. Mark and I have pushed each other, too, ever since, going to the gym and doing the right things every day.”

After Revniaga and Kozev were mainstays on Israel’s age group teams in the lower-division international competition from 15 on, their national program coach, Derek Eisler, told them they should head to the U.S. to play. At that point, they were separated.

Revniaga played for the Point Mallard Ducks in Decatur, Ala., in the North American Tier III Hockey League, in 2016-17; and the New York Apple Core of the Tier III Eastern Hockey League in Brewster, N.Y., last season. He came to Greeley this season after a national team teammate, Tom Ignatovich, who has duel citizenship and is from Seattle, played for the Eagles last season and recommended Haddon and playing in northern Colorado.

Kozev played for the Billings Bulls in the NA3HL in 2016-17, sat out last season while in the Army, and started out this season with the WSHL’s Seattle Totems. He asked for a trade to the Eagles so he could reunite with Revniaga, and the Totems obliged him in December. Kozev had three goals and eight assists in 31 regular season games for Northern Colorado.

“We got them back together,” Haddon said. “I didn’t realize they were childhood friends. It takes a lot to get something out of these guys. You have to ask them a lot of questions. They’re very serious. They’re driven young men. You can see where they come from, with the Army stuff. They’re all business. They’re great kids. I wish they’d have more fun. They had to grow up probably too quick.

“Your players are your best recruiters. I was lucky to to be able to bring them in here and have them be part of the family.”

Both Revniaga and Kozev rave about the Greeley area, Colorado and the Eagles organization. From their conversations, in which they can rattle off cities along the Front Range, it seems apparent they have done some exploring, and Greeley’s population also is about twice that of their hometown…if that means anything.

Next fall, they most likely will be playing college hockey. Separately. Revniaga is drawing interest from smaller NCAA programs, Kozev from Canadian college (CIS) programs.

But they’ve come a long way together.