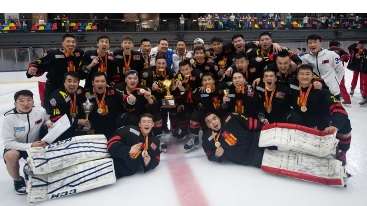 Mongolia defended its IIHF Ice Hockey Challenge Cup of Asia title after a 6-3 victory over the Philippines in the tournament final in Kuala Lumpur, Malaysia. The Philippines had caused an upset in the group stage, defeating Mongolia by the same 6-3 scoreline and threatened a repeat in the final when it battled back from 0-3 down to tie the game before losing out in the third period. A hat trick from Bayarsaikhan Jargalsaikhan led Mongolia’s scoring, Gerelt Ider picked up 1+1 to finish as the tournament’s top scorer on 17 (11+6) points from five games.

Ider was part of the Mongolian roster that won in 2018 but injury forced him out of the decisive 5-1 victory over Thailand that saw his country claim gold in a round robin format. “I was really determined to come back, play to the end and get the medal,” he said after the game. “It’s a very good feeling because I’m here to represent my country. It was a really good game and I’m so happy to defend our title.”

That title defence got off to an assured start with Mongolia jumping into an early lead. Jargalsaikhan opened the scoring in the eighth minute after a solo rush from #22 opened up the Filipino defence. Just 30 seconds later, Mongolia had a second: Erdenesekh Bold took the puck out of the corner, fed it to Enkhsukh Erdenetogtokh at the point and moved to the slot to convert the rebound from the defenceman’s shot. Ider made it 3-0 late in the opening frame with a one-timer from in front of Paolo Spafford’s net off a Jargalsaikhan feed.

But the Philippines hit back. Julius Santiago’s 22nd-minute effort was the only marker in the second period; two goals in a minute at the start of the third tied the game up at 3-3. First, Carl Montano’s pass from behind the net was gobbled up by Jose Cadiz, then Jan Regencia stuffed home the rebound from a Benjamin Imperial shot. Montano and Regencia both had previous against this opponent, having scored two apiece in the group game; now they had thrown the final wide open once again.

However, as Ider explained, this Mongolian team never lacks for character. “The Philippines are a really good team, they played well throughout the competition,” he said. “But we play as one. Everyone works together, everyone wants to accomplish more. We love each other and when we come to a tournament we play as one man.”

Within a minute, Jargalsaikhan had restored Mongolia’s lead; 63 seconds later Ider set up Erdenesukh Bold to make it 5-3 and with 10 minutes to play Jargalsaikhan completed his treble to put the game beyond the Philippines’ reach.

Earlier on Saturday, the host nation took on Singapore in the bronze medal game. However, the home team was unable to finish with a medal thanks to a fine goaltending performance from Kenny Liang. He made 23 saves to claim a shut-out as Singapore skated to a 4-0 win. James Kodrowski scored twice, Bryan Lee had a goal and two assists, Jiaju Ryan Tan was the other goalscorer.

The tournament format saw four teams – Mongolia, Malaysia, the Philippines and Singapore – contest the Elite group with three others playing in Division 1. After a round robin with each team meeting twice, Indonesia came out on top ahead of Macau and these teams progressed to the quarter-finals against the two lowest-ranked Group A nations. Oman finished third in a tight group; the Middle Eastern nation’s competitiveness was emphasized by a goal differential of -1 despite three losses in four games. Singapore and Malaysia overcame Indonesia and Macau respectively in the quarter-finals, but neither could progress through the semis. The Philippines beat Singapore 6-1 before Mongolia downed the hosts 12-6 to set up Saturday’s medal games.