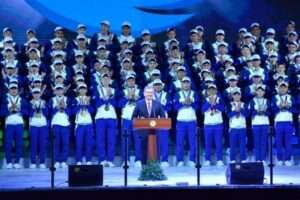 In a spectacular ceremony, the Humo Arena Sports Complex in Tashkent was officially opened by the President of Uzbekistan – Shavkat Mirziyoyev.

The ceremony confirmed the Humo Arena as one of the largest ice arenas in Central Asia, but also one of the most technologically advanced with smart and energy efficient technology used throughout the building.

The arena will operate in three ‘modes.’ This will allow a variety of winter sports – hockey, figure skating, short track and curling – and summer sports – basketball, volleyball, futsal, kurash, boxing, fencing and taekwondo – to be played.

The opening of the Arena complex was a signal of intent from the Uzbek government to position itself firmly on the world stage of international sport with an aim to host the Asian Games in 2030.

Following the official ceremony, guests were treated to a display of sporting prowess by Uzbek athletes and a game of ice hockey between teams mixing veterans and young players representing the past and the future of the sport. Well-known members of the Uzbek Paralympic team were also honoured for their courage and resilience in their performances for their country.

Much was made of the inspiration the Humo Arena will provide, not only to professional athletes looking to take their skills to the next level, but also to the future generation of athletic hopefuls.

In addition to being a state of the art sporting facility, the opening ceremony went a long way to show the multi functionality of the stadium in hosting other cultural events. Uzbek and Russian popstars – Philipp Kirkorov, Nikolay Baskov, Dima Bilan, the Yalla Group and many others – performed at the opening ceremony alongside a beautiful light show.

The launch of the Humo Arena will be followed by the opening of a smaller scale sporting centres and arenas across all regions of Uzbekistan.

“The launch of this modern ice complex is opening up a new stage in the history of Uzbek sport. I am confident that it will serve for training the highest-class athletes and organizing major international competitions in Uzbekistan, most importantly – broadly attracting our youth to winter types of sports.”