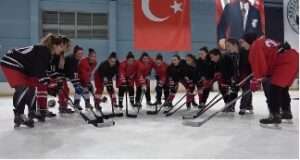 The national women’s ice hockey team wrapped up training for the upcoming world championship in Romania, where they seek to repeat their past success and top their group.

A difficult contest is ahead for the national women’s ice hockey team, but they are confident of success when they travel to Romania next week to take on acclaimed teams in a world championship.

The team wrapped up a three weeks of training in the northwestern city of Bursa for the Ice Hockey Women’s World Championship Division II and hope to make this sport, which is often sidelined in the Turkish media, the talk of the town again.

Ice hockey has been an officially recognized sport in Turkey since the early 1990s, but few teams have found constant success, and it is only recently that a men’s team proved Turkey is capable of competing with the best with consecutive titles in local and international tournaments.

The women’s team already attracted attention when they finished Group B first in Division II of the world championship four years ago, and the same lineup look to repeat this accomplishment. They will square off against Croatia on April 1, before taking on Taiwan the next day. On April 4, they will play against New Zealand, before a game against Iceland on April 5 and against Romania on April 7, the last day of the tournament.

Head Coach Çağrı Karabulut said they are “all ready” after “a fruitful training session.” Speaking to Demirören News Agency (DHA), Karabulut said it has been a tough period for the team, which pushed their limits for a difficult tournament. “They are a bit tired, but I am confident we’ll get good results,” Karabulut added.

The 25-year-old forward Başak Demirkol has been with the team since 2011 and said it is “a love” for her. “I started playing when I was 10, and since then, I have a passionate connection to the sport. It added new things to my life, like planning ahead and scheduling better. Playing with the national team also taught me about team spirit. We learned how to be a family and rather than players, we are like a large group of sisters,” she said.

“We came a long way, from a time when people would ask if ice hockey existed in Turkey to a time where people are interested in the sport,” she said. She also brushes off the view that it is more a male-dominated sport. “There isn’t much difference between men’s and women’s hockey. It is not about having stronger muscles solely. You have to take other things into account, like coordination, keeping balance, team play and tactics. I think it is a very good sport for women to take up,” Demirkol said, adding that new facilities, an increase in the number of coaches and referees helped Turkish ice hockey to overcome the obstacles it faced.

For 24-year-old forward Seda Demir, ice hockey is more “a lifestyle” than a sport. “We not only train in the rink, we also train outside, especially on how to keep better balance. This is a branch that needs you to be agile, stronger and fast. Outside the rink, we work out, run and lift weights. It is tiring, but we are having a good time. Playing for the national team really motivates you to win titles, and I believe we will get good results in Romania,” Demir said. Demir is also pleased to see the rising interest in ice hockey. “Children from nearby schools come here to watch us, and after we end the training, they come for practice,” she said. “We want more people to watch us. If you can’t go to Romania, you can watch our games live online,” she said.