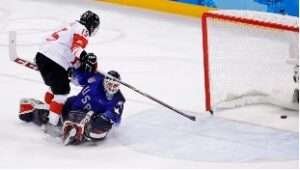 Had the final score been different, Melodie Daoust’s shootout goal would be more celebrated in Canadian hockey history.

With an Olympic gold medal on the line last year, Daoust didn’t play it safe by choosing a corner of the net and shooting.

She wheeled in on U.S. goaltender Maddie Rooney, going forehand-backhand-forehand before reaching to slide a one-handed backhander by the netminder’s outstretched pad.

It was a perfect rendition of the move named after Hockey Hall of Famer Peter Forsberg.

“What I’m thinking about as I go down, if I try to pick a spot and shoot right at that corner, but I miss the net, you look as bad as trying that move and missing it,” Daoust explains a year later.

“You always need a Plan B.”

Her gobsmacking goal giving Canada a 3-2 lead in the shootout was subsequently overshadowed by the dramatic finale in Pyeongchang, South Korea.

Jocelyne Lamoureux-Davidson’s equally impressive moves to score on a sprawling Shannon Szabados, followed by Rooney stoning Meghan Agosta to end the six-round shootout in favour of the U.S., get higher billing any time the 2018 Olympic women’s final is re-lived.

Video of Daoust’s execution of “The Forsberg” endures in social media, however, as a GIF.

“I’m happy to see the world knows what girls are capable of,” Daoust said. “We’re training the same way as the guys and trying the same moves.”

Had that goal led to gold, it would have felt like sweet justice to Canadians who can recall Sweden’s Forsberg beating Canada’s Corey Hirsch in a shootout with those moves for Olympic men’s gold in 1994.

Daoust, pronounced dah-OO, was two years old in ’94. She says she didn’t analyze all the available video of Forsberg or others succeeding with those dangles.

She thinks she saw the sequence once, which was inspiration enough to work on it in the months the Canadian women were centralized prior to the Winter Olympics.

“I’ve seen that move so many times in practice and so to see Melodie pull it out, I wasn’t surprised,” her Canadian teammate Brianne Jenner said.

Canada’s scoring leader in Pyeongchang with three goals and four assists in five games, Daoust was named the Olympic tournament’s most valuable player.

So it seems odd a two-time Olympian is about to play in her first world championship.

Daoust, from Valleyfield, Que., makes her debut Thursday when Canada opens against Switzerland in Espoo, Finland.

An unheralded 22-year-old rookie when she was named to the 2014 Olympic squad, torn knee ligaments cost Daoust most of her 2014-15 season with the McGill University Martlets.

Passed over for subsequent world championships because of “injuries and bad timing”, Daoust had to climb over other forwards on Canada’s depth chart to be an Olympian again in 2018.

She was a Canadian Women’s Hockey League rookie this season playing for Les Canadiennes de Montreal.

Daoust was sidelined for three months with another knee injury, but returned in time to score two goals and assist on three others in the Clarkson Cup playoffs.

“She’s a special player,” said Gina Kingsbury, director of national women’s teams. “She might be, in my mind, the smartest player we have.

“She’ll be a big part of our group and our identity as well.”

Daoust was also an assistant coach this past season with the University of Montreal Carabins, who won a bronze medal at the U Sports women’s championship.

With coaching definitely in her future plans, the 27-year-old didn’t want to wait until the end of her playing career to start down that path.

“I feel I can still learn about the game by me playing it and then I can share it with the girls,” Daoust explained.

“I just thought for me it was good start to step into the job life and see if I do like it,” she continued. “I studied to be a phys-ed teacher. I liked it, but it wasn’t a passion of mine.

“A hockey career is the job that’s going to give me the most thrill.”

Daoust could teach The Forsberg, although she’ll keep a few secrets to herself in case she needs to break it out again.

“First, you need to breathe in and loosen up the hands,” Daoust said. “When you go in, you want to have a good angle and you want to make the goalie move in her net.

“It’s usually one or two moves before you see if the goalie is going to bite or not and follow you. I can’t give all my tips away.”

In addition to her coaching gig and commitments to her CWHL and Canadian teams, Daoust and partner Audrey St-Germain have a 10-month old son Matheo.

“The rest of my life is kind of separated from sport,” Daoust said. “Those are two big parts that are taking up a big part of my life. I’m really happy I can do both.”