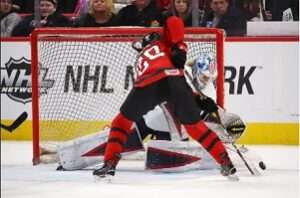 It was all Finland in this one, who bounced back in resounding fashion from their third-period collapse in the tournament opener to roll past the Russians. The Finns’ young players continued to stand out, with Nieminen opening the scoring and Vainikka earning Player of the Game honors with a goal and two assists. Holopainen and Hakala each chipped in a goal and an assist as well. Overall, Finland outshot Russia, 37-18. Goaltender Valeria Merkusheva started the game for the Russians and was relieved by Anna Prugova about eight minutes into the third.

There was a lot of special teams action in this one. The teams took a combined eight penalties (five for Team USA, three for Canada), and both teams were able to take advantage at one point or other. Two of Canada’s goals came on the power play, and so did one of the Americans’. As expected, this was another close game between the rivals. Team USA took the lead three different times, but the Canadians matched them goal for goal until Pankowski’s game-winner towards the end of the second period.

Canada had some really good chances to tie it in the dying minutes of the third, but Team USA’s penalty kill came up huge to prevent the Canadian power play from getting a third goal in six-on-four fashion. Alex Rigsby was excellent in net for the Americans, with 31 saves. Emerance Maschmeyer made 27 saves for Team Canada.

The Czech Republic picked up a big win over Sweden to finish the day on top of Group B. The two teams traded goals to start off, with Olsson getting Sweden on the board in the first and Mlýnková tying it up for the Czechs less than four minutes later. Nordin scored to put the Swedes ahead before the end of the period, but the Czech Republic scored three unanswered to take a two-goal lead and, eventually, the game.

The power play was once again clicking for the Czech Republic, tallying two goals today.

Another excellent goaltending performance from Jennifer Harß propelled the Germans to their second-straight win to start the World Championship. She made 39 saves to hold off the Japanese attack. There was plenty of drama in this one at the end; Germany went up 2-0 midway through the third before Japan stormed back to tie it up less than two minutes later. Delarbre broke the tie with about three minutes left to secure the win.