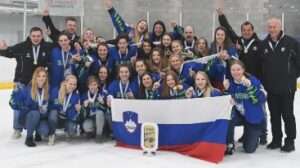 Slovenia powered to the summit the 2019 IIHF Ice Hockey Women’s World Championship Division II Group A on the back of a devastating performance from its free-scoring first line.

The combination of captain Pia Pren, Sara Confidenti and Julija Blazinsek delivered 47 points in five games to set the team atop its group in Dumfries. Pren, 27, led the way with 20 (6+14) as she dominated the scoring for the tournament. Confidenti (7+7) and Blazinsek (7+6) were the key beneficiaries of those 14 helpers.

It added up to scoring power that no other nation could rival. While Slovenia hit 24 goals in its five games, the next best tally came from Mexico, trailing some way behind on 14 goals. The Slovenes also recorded the two biggest wins in the competition: 7-1 against Mexico and 6-1 against Australia.

However, there were some anxious moments for Slovenia, despite that impressive offence. The opening game against newly-promoted Spain ended in a shoot-out loss. North Korea, complete with several players who featured on the cross-border Korean team at the Winter Olympics last year, also put up a fight before losing out in a shoot-out. But, in a fiercely competitive tournament, nobody could produce consistent results. Slovenia began the final day’s play against Mexico knowing that victory would guarantee gold regardless of other results.

It wasn’t quite plain sailing: the Mexicans, always an awkward opponent in this championship, took an early lead through Joanna Rojas. The assist came from Claudia Tellez, a 2016 draft pick for the Calgary Inferno in the CWHL. That was a big lift for Mexico, which had its own hopes of top spot, and drew a cheer from the GB fans who came to watch the early game. A Slovenia loss would have given the host nation a shot at promotion if it could beat DPR Korea in the last action of the tournament.

But Slovenia was not about to slip at the last. Four goals in the closing minutes of the opening frame – Pren scored two and assisted on the others – turned the game, and the tournament, decisively.

Slovenia’s success follows the decision to move Olimpija Ljubljana, the country’s leading women’s team, to the cross border Elite Women’s Hockey League. Although the team found life tough in a competition that features rivals from Austria, Hungary, Kazakhstan and Italy, the experience of competing at a higher level provided a big boost for many of the team. Nine of Franc Ferjanic’s roster came from directly from Olimpija, while others, including Blazinsek, spent some time on that team over the course of the season.

For Pren, hockey at that level was nothing new. Before Olimpija joined the EWHL, she played several seasons with Sabres Wein and the Southern Stars, and also had a year in Sweden with Linkoping. But now she’s hoping that more girls from Slovenia will get the chance to pursue the game. Prior to this month’s tournament she gave an interview to Telekom Slovenje’s SIOL website. While acknowledging that a national championship that involves just three clubs makes it difficult for potential players to find a place to play, she was also upbeat about the progress that could be made in future.

“For starters, I want to see women enjoy the same conditions as male players in Slovenia, so that in future generations we can have the same opportunities to practice,” she said. “This would be real progress and it will come in the future. It might come in small steps and I understand that it will happen after the end of my playing career but I believe we will make progress.”

Slovenia wasn’t the only nation celebrating progress. Spain, making its first appearance, followed up last year’s promotion with a bronze medal. A 3-2 victory over Australia on the final day took Spain to nine points, with its other successes coming in that shoot-out win over Slovenia, a 2-0 regulation triumph against Mexico and a shoot-out loss to the North Koreans.

Great Britain, the host nation, took silver for the second year running. A 2-1 victory over the Koreans on Tuesday left Cheryl Smith’s team one point behind Slovenia and ruing a 2-4 loss against the eventual champion earlier in the week. DPR Korea took fifth place. At the foot of the table, Australia failed to win a game and was relegated to Division IIB after three seasons at this level.