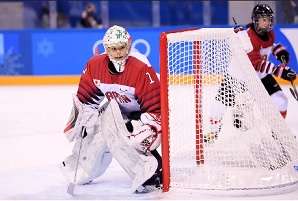 USA, Canada, Russia, and Finland are moving on to the semifinals!

This one ended up being pretty close, much closer than many expected for the quarterfinal round. After one period, Team USA led by just one goal, and after two periods, it was a 2-0 game. Japan couldn’t get much offense going in front of Nana Fujimoto, though, who had 49 saves.

We saw another outstanding goaltending performance from the Group B side, with Jennifer Harß making 56 saves for the Germans, but the Canadians rolled on to the semifinals. Shots on goal were 66-9 in favor of Canada.

Russia came out swinging in this one, outshooting the Swiss 18-1 through the first period and 44-14 for the game. Andrea Brändli was excellent in net for Switzerland to keep them in it, but this was a good statement win for the Russians heading into the semifinals.

The Czech Republic struck first after a scoreless first period with a goal 1:31 into the second, but the Finns notched three straight goals to advance to the semifinals. The game-tying goal and Jenni Hiirikoski’s insurance goal that put Finland up 3-1 in the third period were both scored on the power play. Michelle Karvinen and Hiirikoski both finished with three-point nights and Noora Räty stopped 16 of the 17 shots she faced; Klára Peslarová made 40 saves for the Czech Republic.

There is no relegation round this year, with both France and Sweden moving down a tier next year, but they battled out to decide ninth place in the tournament. Sweden outshot France, 34-26, but the French kept it a pretty close game. Goaltender Caroline Baldin made 31 saves, and Aurard scored another big goal to pull France within one at the end of the third. Sweden ended up prevailing, thanks in large part to good performances from Winberg and Nordin, who each posted a goal and an assist.