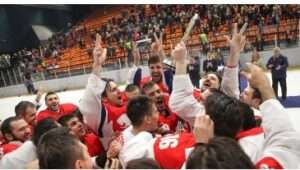 The Serbian players celebrate with the trophy on home ice in Belgrade after winning the 2019 IIHF Ice Hockey World Championship Division II Group B and earning their first Division I appearance in ten years.

In a roller-coaster ride of the tournament, with a seemingly never-ending supply of twists and turns, Serbia won gold at the 2019 IIHF Ice Hockey World Championships Division II Group A in Belgrade.

Down but never out, Marko Brkusanin became Serbia’s hero when he coolly slotted home the game-winning penalty shot against Spain and lifted the hosts into the 2020 IIHF Ice Hockey World Championships Division I Group B.

A desperate Serbian team had only been in fourth place, when they were offered a lifeline in their final game against Spain. Blueliner Stefan Boskovic drew them level with 28 seconds left of the third period before Serbia´s netminder Arsenije Rankovic then saved three out of four Spanish penalty shots as 1,276 cheering home fans lifted the roof inside Belgrade´s Ice Rink Pionir.

Serbia’s 3-2 win over Spain marks the end of a historical season and possibly the start of a new exciting chapter for Serbian hockey.

This means a lot to us. Never before has our national teams won three gold medals in one season. It’s a great thing for the promotion of hockey in Serbia.
Marko Milovanovic
President Serbian Ice Hockey Association

Serbia´s U20 and U18 national teams had already won gold at their respective World Championships at Division IIB level. Now they were joined by the senior team who won Serbia´s third consecutive gold medal this season and their first one at senior level since 2009. 17-year-old prospect Marko Dragovic played an integral part in Serbia´s success this season winning gold in all three categories.

En route to their gold, Serbia first saw off Croatia (3-1) before losing to Australia (2-3). They bounced back with straight wins against China (6-5) and Belgium (6-3) before finally toppling Spain following a nerve-racking final round of games.

Serbia´s final day celebrations was made possible thanks to neighbours Croatia, who earlier that day edged Australia, the leader of the standings after four days, 2-1. Both teams then watched on as Serbia collected their gold medals while dwelling on what could have been.

Croatia, who came within an earshot of gold, had to settle for silver, while Australia who entered the final day in pole position, finished up with the bronze medals. At the other end of the table, Belgium got relegated to Division IIB after losing the deciding game for fifth place to China.

Aleksa Lukovic´s goal after 4:10 had put Serbia ahead against Spain. Gaston Gonzalez hit back with an equaliser at 26:03. An Oriol Rubio power-play goal at 46:34 got Spain ahead and temporarily silenced the home crowd before Serbia´s last gasp leveller got their promotion campaign back on track and take the game into overtime, which finished goalless.

The influential Rubio scored Spain´s sole penalty marker in the shootout, while Serbia’s 20-year-old Mirko Djumic, voted the best forward of the tournament, also coolly slotted home his penalty in the shootout.

“After the shootouts and all the excitement I was shaking, but our players were used to this as they were three goals behind against China earlier in the tournament,” said Milovanovic.

During game day three against China, Serbia appeared to have dug themselves into a hole. With just over 11 minutes left of the game, China was cruising with a 5-2 lead. A frantic fightback saw Serbia score three unanswered goals to draw level with 1:36 to go. Then newly appointed head coach Alexandre Dandenault went for bust in what in hindsight turned out to be a masterstroke.

With 14 seconds left of the third frame and with netminder Rankovic pulled from the net, 19-year-old debutant Viktor Kastel sealed all three points for Serbia as team morale got a monumental boost.

In my opinion, it was the China game that changed everything for us in this tournament. We showed great character to never give up until the end.
Marko Sretovic
Serbia Captain

With his 5 points (3+2) Sretovic was Serbia´s joint top-scorer and together with Stefan Ilic, the two sole survivors on the roster who last won gold for Serbia at senior level. At the 2009 IIHF World Championship Division II Group B Sretovic tasted success and promotion in Novi Sad in what was different times for Serbian hockey.

“At that time hockey was at the highest level in Serbia. That team was more experienced. This year we have many young players with a lot of speed who helped us to win many of our games,” said Sretovic, who after winning his second gold at senior level has come full circle in a long and distinguished national team career.

“This was my absolute last season for the national team. I wanted to finish where everything once started,” said Belgrade-born Sretovic as he expects next season to be a stern test for his compatriots playing at a much higher level.

“It will be very tough, much harder than this. We need more preparation and a training camp as the guys should be ready to work hard with a lot of defending to be expected. I hope the head coach (Dandenault) and the staff will continue for next year,” said Sretovic.