Russia won the Euro Hockey Tour 2018-19. The top spot of the combined standings of the four EHT tournaments was secured already before today’s 4-1 win over Czech Republic.

After two poor games with losses to Sweden and Finland Russia finally got ends to meet and beat the Czech home team 4-1 in Brno.

Tonight it was the line with Yevgeny Kuznetsov (2+2), Alexander Ovechkin (0+3) and Kirill Kaprizov (1+1) that made the difference. and Andrei Vasilevsky in te Russian net made 23 saves.

The World Championship starts on Friday in Slovakia. Russia will play Norway on the opening day while Czech Republic will play Sweden. 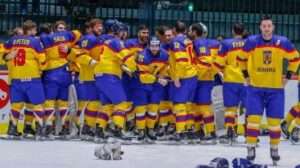 Romania celebrates winning a place in next year´s Division IA with Attila Goga (front right) trying to come to terms with their sensational performances in Tallinn.

Dubbed as one of the main contenders for relegation at the start of the tournament, Romania had other plans as they roared to a sensational gold at the 2019 IIHF Ice Hockey World Championship Division I Group B in Tallinn, Estonia.

Romania beat the Netherlands 3-1 in their final game at Tondiraba Ice Hall to surge through the tournament undefeated and take a significant leap upstairs in the international world of hockey.

Power-play goals by Gergo Biro and Attila Goga put Romania two goals in front against the Netherlands. It was to be a lead they never relinquished. Outshooting the Netherlands 32-15, Balasz Peter lobbed Romania’s third in the empty net with 44 seconds to go.

The win sees Romania climb up to the 2020 IIHF Ice Hockey World Championship Division I Group A. Winning gold also means Romania will jump up on the IIHF Men’s World Ranking and reach heights they have not been at since 1995 when they were 20th overall in the World Championship program.

“This is incredible for us. We came here to try and stay in the group and here we are, winning all five games,” said Romania’s Daniel Tranca, voted Best Player of the Game against the Netherlands and played an integral part in the turnaround in fortunes in a team that last year survived in Division IB during the last day.

It’s euphoric, I cannot really describe it. I still don´t really believe that next year we will be in the Division IA.

“We had higher expectations going into this tournament than last year, but we honestly did not expect to promote,” said Gliga.

Having opened their sensational gold winning campaign in Tallinn by beating Estonia on penalty shots (4-3), they then downed Japan (3-2) which was followed up by an overtime win against Poland (3-2). Romania rolled on to topple Ukraine (5-1) before brushing aside the Dutch (3-1)

“We took it game by game. We have a really good group and knew if we kept on playing really good defensively and be efficient we had a chance. The key game was against Poland. They were the big favourites and after beating them, we knew we had to do whatever it takes to win our final games,” said Gliga. 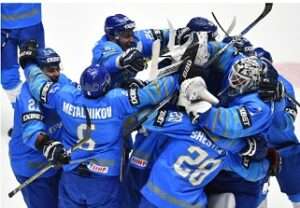 
The hosts and Belarus are guaranteed to finish in the top two prior to the conclusion of the event at Barys Arena today.

Their places in the top tier of the World Championship were confirmed when South Korea suffered a shock defeat to Lithuania.

South Korea had been chasing promotion but their hopes were ended after they lost 2-1.

The home nation play Hungary, while Belarus take on South Korea, who made their IIHF World Championship debut last year before they were immediately relegated.

Today is the last-day at the Division IA. Thank you Kazakhstan?? for the great event and thanks to all supporters who came to the arena and travelled to Nur-Sultan to support their teams! ??? pic.twitter.com/o8lMth2Ojf

“We are very happy, congratulations to all Kazakhstan that the team is finally back to the top division,” said Kazakhstan head coach Andrei Skabelka.

“The game against Belarus was the best game we had in this tournament.

“We had many opportunities and a very good start but still the problem that we didn’t capitalise on our chances.

“We want to be better in this aspect.”

Kazakhstan last featured at the IIHF World Championship in 2016, where they finished bottom of Group A and were relegated to Division IA.

Belarus have made an immediate return after they dropped out of the top division at the 2018 tournament in Denmark.

Switzerland is due to host the 2020 IIHF World Championship, with matches set to be held in Zurich and Lausanne.