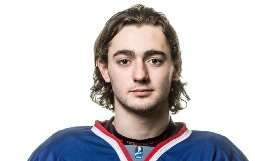 GROWING UP IN Maltby, England, Liam Kirk dreamed of playing for the Sheffield Steelers, the local professional hockey team.

Though there were a few rinks nearby, ice time for hockey teams was scarce. Kirk’s junior team played only 19 games a season and trained just once a week. He often practiced outside his house with rollerblades. At 17, Kirk made the Steelers and began playing among grown men. The forward was tall and thin but had soft hands and a quick release, and international scouts took notice. That’s when Kirk realized there was an even bigger hockey world out of his purview. “Everything after that is kind of a whirlwind,” Kirk says. “My new dream was to make the NHL.”

Last June, Kirk was selected by the Arizona Coyotes, in the seventh round, to become the first English-born-and-trained player to be drafted into the NHL. At 5 a.m. the day after being drafted, Kirk was on a plane to Phoenix to participate in the Coyotes’ development camp. He spent this past fall living with a billet family in Peterborough, Ontario, as he played for the Petes of the Ontario Hockey League, one of the top junior leagues in North America where he could compete with some of the best players in his age group.

Living in Canada, Kirk was in awe of hockey’s popularity. “You don’t get questions like I did growing up, like, ‘Oh, you play ice hockey?'” he says. “The passion was so present. There are rinks everywhere. You walk around, you see hockey; you turn on the TV, you see hockey.”

When the season was over in March, Kirk returned home and trained with the national team to prepare for the Ice Hockey World Championships (May 10-26). Now the 19-year-old has an even bigger dream: “I want to help put British hockey on the map.” Kirk’s North American exposure means he could be the talent who raises the profile of hockey in Great Britain. He could also give young British players hope — and a new dream to strive for. And the Worlds will be his first test toward achieving all of that. 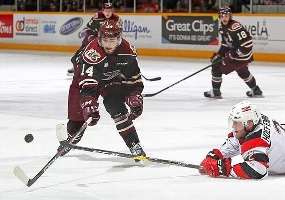 In regular-season play with the Peterborough Petes, Kirk scored 26 goals, the third-highest tally on the team. The top scorer had 29

GREAT BRITAIN IS competing in the top division of the World Championships for the first time since 1994. In the tournament, Team GB will be in a group with world superpowers such as Canada and the United States, meaning it will face NHL superstars like Patrick Kane, Jack Eichel and John Tavares.

The Brits won promotion last spring by winning the World Championship Division A in Hungary. That team’s slogan? “Livin’ the Dream,” a mantra it will take to Slovakia.

“I think there’s a lot of pessimistic people in the UK, who believe now that Great Britain is in the top flight, they’re going to come down,” says Andy French, Ice Hockey UK’s general secretary. “Great Britain isn’t a hockey country. It’s a football country, it’s a rugby country, it’s a cricket country. But I think we might surprise a few people. What they don’t realize is, we’ve been building up for a while, and everything is going in the right direction.”

The most noticeable change: Of the 23 players on the 1994 roster, 15 of them were dual nationals, mostly Canadian. Now? There are only five dual nationals on the roster — and the rest are purely homegrown. What’s more: Kirk is the only player who doesn’t play in the UK’s Elite Ice Hockey League (where the Sheffield Shields play), a testament to that league’s growth.

The men’s national team won bronze at the 1924 Olympics and gold in 1936, but the sport never really took off the way it did in other European countries — mostly due to the lack of available ice and popularity of other sports. When Great Britain qualified for the 1994 World Championships, it was its first appearance since 1951, but it failed to even earn a point. 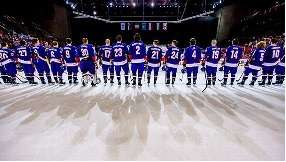 At the World Championships, Great Britain will compete in the top division for the first time since 1994.

There have been encouraging signs recently. French says youth hockey numbers are growing year to year at approximately 80 to 100 registrations among males and females. The country is at around 12,000 registered players across all age levels, including university and recreational men and women. (For context, Finland, a country with less than a 10th of the UK’s population, has more than 70,000 registered players.)

Once the Great Britain men’s senior national team qualified for the World Championships last spring, interest spiked. Companies began calling. “We managed, for the first time in the history of the team, to secure major sponsorships throughout the GB program,” French says. “Not only for the men, but for the U18 and women’s team, too.” The company Lucas is the main sponsor, and will have patches on the team’s sweater. Ice Tech UK is the team’s helmet sponsor.

Even Kirk landed a personal deal with the travel pillow company Trtl — something rare for a seventh-round pick playing in juniors, who is probably still a long shot for the NHL.

Team GB is one of the few ice hockey federations that has a fan support club; French has been assisting fans with travel and ticket allocation for Slovakia. He says there will be close to 1,000 fans on site to cheer on the Brits.

PETER RUSSELL WAS appointed as the men’s national team coach in 2015 and created a five-year plan to bring the team back to relevancy. He achieved it in four.

It helps that Russell came up through the ranks, coaching the country’s U18 team, then U20.

“There’s no pressure on [the team],” French says. “We’re coming in obviously as the underdog. We are ranked 22 in the world, even though we are in the top 16 obviously at the World Championship. So we’re just going to take them as it comes and see what happens. We’re really just living the dream.”

Still, the team has its work cut out. “Our main goal is to stay in the group,” assistant coach Adam Keefe said. Keefe is a Canadian who came to Northern Ireland in 2011 to play for the Belfast Giants, and then stayed to coach them when he retired in 2017. His brother is Toronto Marlies coach Sheldon Keefe.

“Pete has the mentality that we’re not going to change our style now that we’re playing up,” Keefe says. “We’re aggressive; we’re a work-ethic team. It’s going to be tough to skate with these teams, but we’ll have to be an extreme work-ethic team [to] make sure these teams have to beat us. Our guys have a lot of pride in their nation and in their group. Any time you have that buy-in, you have a chance. Sure, we’re going to need a little luck, but we have something special here.”

The tournament is an international showcase for Team GB, but also a passing of the guard. “Liam Kirk is obviously the future of this team, but Colin Shields is the highest-scoring British national team player. He’s 39,” Keefe says. “He just retired from my team [the Belfast Giants], and he’s played 19 years for this nation and now he gets the chance to play at the highest level. So you have the youth coming in and the veteran leadership going out.”

Shields, born in Scotland, played for the University of Maine and was drafted by the Philadelphia Flyers in the sixth round of the 2000 draft, but he never made it past the ECHL in North America before returning to the UK.

There are other players with UK roots sprinkled in North America. One of them is Chicago Blackhawks forward Brendan Perlini, who was born in England and lived there until he was 11 before moving to Canada. Perlini has played for Canada internationally, but his brother Brett is on Team GB for the World Championships.

If Team GB gets a smidge of success in the World Championships, Perlini figures it could be huge for the growth of ice hockey. “I know how patriotic they are with football — the whole country is behind them,” Perlini says. “Then you have someone like Mo Farah, the long-distance runner, everyone loves him. Anyone who does decently there is important. If [Team GB does] well in this tournament, it’s a huge step for them.”

Adds French: “This is a huge moment for British hockey and really important for hockey in the UK. All the little kiddies, they obviously look up to the NHL players. But they’re actually going to see Great Britain players — that they can see domestically, week in and week out — play against NHL superstars, and that will make them seem like superstars.”

And maybe inspire some new hockey dreams. After all, it’s hard to dream what you can’t see.