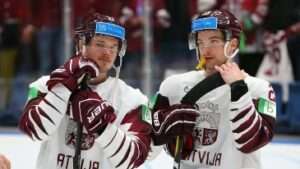 For the Latvian national team, adding NHL talent to the roster is always a big deal. The Baltic nation punches above its weight in international hockey and when representatives of its relatively small player pool get to make it in the big league, it can bring a huge lift for the whole team.

So this year, with two youngsters making their NHL debuts, there’s a sense of excitement in the Latvian camp. Rudolfs Balcers (Ottawa Senators) and Teodors Blugers (Pittsburgh Penguins) have picked up favourable notices across the Atlantic – and made an impressive start to life in Bratislava.

Balcers was the immediate impact guy. Just like last season, he got Latvia’s first goal in the championship, responding quickly after Austria snatched the lead against the run of play in Saturday’s opening game. And his evening got even better with three assists as Latvia moved to a 5-2 victory. Further helpers in the 1-3 loss to Switzerland and Monday’s 3-0 win over Italy took him to 6 (1+5) points for the championship and kept him in touch with the tournament scoring leaders.

Then there was Blugers, better known as Teddy in Pittsburgh, who had two assists in that opening game despite recovering from a leg injury that restricted his training in the build-up to the championship. The pair started off on a line with team captain Lauris Darzins and looked impressive, although the decision to separate them for the Swiss game did not pay off so handsomely. However, head coach Bob Hartley was in no doubt about their importance to his team.

“Balcers is a magician with the puck,” he said of the 22-year-old. “He finds the puck and the puck seems to find him. He was a real strength for us against Austria, along with Ronalds Kenins and Rodrigo Abols.”

As for Blugers, 24, Hartley added: “He’s a great two-way centre and he’s growing into a great professional with Pittsburgh. He understands the importance of the defensive game but offensively he is much more skilled than most.”

Balcers impressed last season as Latvia reached the quarter-finals in Denmark and he immediately looked comfortable back on the World Stage. His six-point haul from 2018 made him the team’s leading scorer, but that mark is already under threat with five from two games in Bratislava. However, he remains modest in assessing his progress after a big year in his fledgling career.

“There some things I got better at, at least I think so, but there’s still stuff I’ve got to work on,” he said. “That’s true in this tournament too. It’s just the start, I’m trying to get the feel for the game and try to get better every time.”

Certainly, a return to Europe’s larger ice is doing no harm for the forward. “You get the puck and you have that little bit more time, you can make that extra play or hold on for a second. That’s maybe the biggest difference. But I don’t know if it’s simpler, a lot depends who you play too.”

Others are happier to blow Balcers’ trumpet for him. Kenins, who picked up a goal off a feed from the Senators rookie, was delighted to work with a player who reads the game so well. “He’s a great player,” he said. “I just needed to make a sound and he saw me in the slot and picked me out there.”

Back in Ottawa, coach Guy Boucher has spoken of his man’s ability to adapt, citing the way Balcers learned from a juddering experience in his first road game and bounced back the following night to counter the physicality of the NHL.

And Blugers is also a fan of his fellow rookie. “He’s a very good player. His game always consists of finding opportunities. He can get away one-on-one and he can see the game very well. I think he was our best player against Austria.”

As for his own progress, Blugers insisted that there were no ill-effects from that injury – and more than 22 minutes on the ice suggests that the youngster is fully fit and raring to go. Hartley is keen to get as much use as possible from him. “He has a good face-off and he can also play power play and penalty kill. It’s important for us that he’s recovered from his injury.”