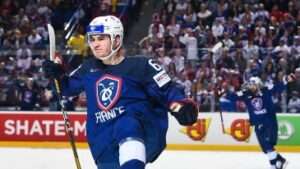 Twelve came before him. Twelve players who have appeared in an NHL game were born in France. Three were really Canadian – Maxime Sauve, Paul MacLean, Pat Daley – so the true number is nine.

And then there is Alexandre Texier. As of 5 April 2019, he is lucky number 13. Born in Grenoble, the 19-year-old is already important in French hockey because he is the first from his country to be drafted out of the domestic league, the Ligue Magnus.

Two years ago, the Columbus Blue Jackets selected him 45th overall, and since then his career has taken off.

Texier played for the Grenoble Bruleurs de Loups, the same team his father played for 30 years ago. But after being drafted he moved to Finland to accelerate his development. He put on weight and gained strength and worked on skills and every aspect of his game.

I didn’t expect anything about the draft. I was just playing in the French league, trying my best, and good things happened. I enjoyed that moment, but it’s only one step.
Alexandre Texier
French forward

For two years Texier played for KalPa Kuopio, scoring 63 points in 108 games between 2017 and 2019. He led the team in scoring in that second year, and after the season that’s when things started to take off.

Because the European regular season finishes much earlier than the NHL, Columbus signed him just a couple of months ago and assigned him to their AHL team, the Cleveland Monsters. It was a welcome, but completely unexpected, promotion.

“I started the year in Finland and just wanted to get better with every game,” Texier said. “I didn’t have any special expectations, just play a physical game. I didn’t want to think too much.”

Whatever adjustments he may have had to deal with – smaller ice, more physical game, new culture – he made them immediately. In seven games with the Monsters, he scored five goals.

“I cannot compare between Finland and the AHL,” he continued. “It’s different hockey. There are a lot of young guys in the AHL, so I tried to keep things simple.”

Impressed, GM Jarmo Kekalainen called him up to the big club, and on 5 April he was in the line-up for a road game against the Rangers at Madison Square Garden in New York. The team won, 3-2, in a shootout, and Texier had 11:49 of ice time.

A day later, in Ottawa, he scored his first goal. It came on a two-on-one, and it was an international goal. That is, Dane Oliver Bjorkstrand made the pass to the Frenchman Texier, who ripped a nice shot past Swedish goalie Anders Nilsson.

“I was so happy to play in that first game,” he smiled. “My family was there, and the next game I scored. The puck is on my wall now. It was a great experience for me.”

Texier relishes his past and is proud of what he’s done, but it’s clear his ambitions are far greater. What’s done is done, and it’s the future to which he sets his sights. That means keeping France in the top level of the World Championship, and becoming an even better player in the NHL next season.

“It was a great year for me this year,” he said, “so I’m happy, but now I’m here at this World Championship and this is my focus. The work comes first, if you want to play in the NHL. This is the first step for me, but it’s going to be hard. I have to prepare and be ready for next year. I have to be way better, on the ice and off the ice. I have to work on my shot, on my skills, my physical game, everything. This is just the beginning.”