IIHF’s new president to be elected in Sept. 2020 at Congress in St. Petersburg 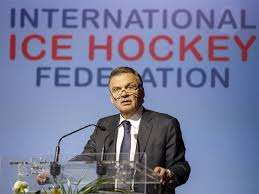 The new president of the International Ice Hockey Feederation (IIHF) will be elected in September 2020 at the organization’s Congress in Russia’s second largest city of Saint Petersburg, IIHF President Rene Fasel told TASS on Tuesday.

“The IIHF Congress to elect the organization’s new president will be held in [Russia’s] Saint Petersburg in September 2020,” Fasel, who is currently attending the 2019 IIHF World Championship in Slovakia, said in an interview with a TASS correspondent.

Fasel first voiced his intention against running for another presidential term in November 2017 and last October he confirmed to TASS that he would vacate the post in 2020.

The current presidential term of Fasel, who is 69, expires in May 2020. The Swiss-born former dentist with a gift for languages and a deep passion for the game of ice hockey was first elected to run the world’s governing body of ice hockey in June 1994. He was re-elected for a sixth presidential term at the 2016 IIHF General Congress in Moscow.

According to the official website of the IIHF: “When Rene Fasel became Dr. (Gunther) Sabetzki’s successor as IIHF President (in 1994), the world federation steeped in tradition entered a new era.”

IIHF President Fasel was also the first ice hockey representative to be appointed in 1995 to the International Olympic Committee (IOC), where he massively raised the stature of the sport of ice hockey.

Asked by a TASS correspondent what Fasel thinks of the organization of the 2019 World Championship in Slovakia after more than a week of group stage matches, the IIHF chief said he was completely satisfied.

“I am very happy,” the IIHF president said. “We are in a hockey country, people love hockey here with a lot of great fans.”

“The organization is really going well, the teams and players are very happy and I hope it will continue till the end,” he added.

The 2019 IIHF World Championship is hosted by Slovakia between May 10 and 26. The participating teams were divided into Groups A and B. Group A is playing matches in Slovakia’s Kosice and includes hosts Slovakia, Canada, the United States, Finland, Germany, Denmark, France and Great Britain.

Group B is playing matches in Bratislava and enlists teams from Sweden, Russia, the Czech Republic, Switzerland, Norway, Latvia, Austria and Italy.

The semifinals, the final and the match for the bronze will be played in Bratislava at the over 10,000-seat capacity Ondrej Nepela Arena. Kosice, which has a population of 240,000, offers the over 8,300-seat capacity Steel Arena.