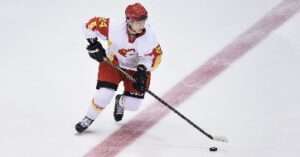 Many high-profile NHL players might disagree, but for the majority of athletes, making it to the Olympics is definitely a once in a lifetime opportunity. As the 2022 Beijing Winter Olympics are approaching, some hockey players are doing their best to get into the tournament. As the host of the upcoming event, China will get its first opportunity to send a male hockey team to compete against some of the best sportsmen in the world. South Korean national team learnt a lot from their experience at the 2018 Olympics held in PyeongChang, and now China gets a similar opportunity, that it’d better not blow.

Despite having the biggest population in the world, China is far from the biggest hockey country. While local athletes have demonstrated their excellent abilities on ice winning Olympic gold medals in short track speed skating and figure skating, China has yet to show significant improvements in hockey. The two-time Asian Winter Games champion now merely ranks 33rd out of the 50 teams in International Ice Hockey Federation(IIHF). China currently plays in Division II, Group A league in the IIHF Championship, a tier-four tournament in the competition.

In the Chinese national team 2018 IIHF World Championship roster, the majority of players came from the China-based KHL hockey club Kunlun Red Star. However, these players were not even competitive enough to play actual KHL games. The lack of high-level competitions explains why China has been failing to progress in recent international tournaments.

With the Winter Olympics in just three years, uplifting the skills of Chinese hockey players seems like a mission impossible. The lack of high-level competitions and good training environment, and potentially the lack of financing are all contributing negatively to the competitiveness of the Chinese players. In addition, China still has extremely strict rules on foreigners’ naturalization, making it essentially impossible for foreign talent to represent China on the international level. With limited resources, a handful of good athletes and inflexible immigration policies, Chinese hockey professionals found their last resort in the overseas Chinese community.

Beijing Daily reported earlier that several overseas Chinese players joined the developmental training camp hosted by Kunlun Red Star in May. The athletes, such as Alex Riche and Sam Hu, talked about their eagerness to become part of the 2022 Winter Olympics team. According to the publication, overseas Chinese players are dominating in training matches, beating the current national team with a score of 10-0.

While the overseas Chinese players are nowhere close to being the best hockey players in the world, the results of the training matches indicate that the current national team is hardly ready for the Olympics. The need to recruit more competitive players is urgent and paramount.

Among the overseas Chinese players who participated in the developmental program, some might have Chinese citizenship, which would make the process of joining the team easier. As for foreign-born players with Chinese heritage, they will need to put in more effort into making their Olympics journey come true.

Alex Riche, also known by his Chinese name Shen Jialei, is a Canadian-born hockey player with a Canadian citizenship. Riche formerly played for three different teams in the Ontario Junior Hockey League and joined Princeton to play for the NCAA. During the 2018-2019 season, Riche concluded his collegiate hockey career by scoring 11 goals and 15 assists for Princeton University. Speaking to Beijing Daily reporters, Riche admitted that he hoped to make the transition from university hockey to professional hockey, and he is currently seeking opportunities to play in the Russian hockey league KHL. Riche also spoke highly of the potential opportunity to be part of the Chinese national hockey team. Alex Riche’s mother was Chinese, making it possible for him to naturalize and play for China in future competitions.

It is hard for foreign nationals to naturalize in China. However, for those who have Chinese ancestry, the process could be easier. According to Chinese nationality laws, those who are born with a Chinese parent that does not have a permanent residency in any other country will automatically be granted Chinese nationality. Furthermore, those who have Chinese heritage could presumably naturalize via their parents or relatives.

The existing policies opened doors for foreign-born athletes with Chinese heritage. In football, two players successfully finished their naturalization process in China and are very likely to play for the Chinese national team in future competitions. Former England U19 team member Nico Yennaris and Norway U-18 player John Hou Sæter both joined Beijing Guoan, and are now naturalized Chinese citizens eligible for playing in future Asian Cups and FIFA World Cup Tournaments. For Chinese officials who are desperately looking for fresh talent to improve the national team records, naturalizing foreign-raised competitive players with Chinese heritage seems to be an easy way to make things happen.

The 2018 South Korean Olympics team may be a good reference for the Chinese national team in 2022. South Koreans finished last out of the 12 teams that played in the Olympics finals. Losing all four games in the tournament, the Korean team scored 3 goals but conceded 19 in group stages and placement playoffs. It is, however, worth to mention that the South Korean national team naturalized several foreign players who have no Korean ancestry, including former Boston Bruins goaltender Matt Dalton, former Anaheim Duck defenseman Eric Regan, and former New Jersey Devils Centre Michael Swift. The South Koreans have the highest IIHF ranking among all participating Asian teams. They showed significant improvements thanks to foreign talent, better training and professional guidance from a Stanley Cup Winner Jim Paek.

It is worth to note that unlike the South Korean model, the Chinese naturalization model remains limited and may not be efficient. While having a significant advantage over the native Chinese players, the overseas Chinese players may not be as competitive as expected on the international level. With no clear signs of changes in the country’s naturalization law, the Chinese hockey team is likely to face great challenges and potential embarrassment in its first-ever Olympics in 2022. 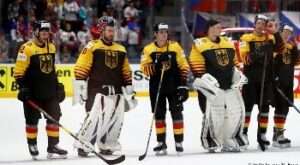 Germany’s hopes of reaching the semifinals of the Ice Hockey World Championship were dashed at the hands of the Czech Republic. However, there were signs that the national team remains on an upward trajectory.

Having beaten one of the traditional ice hockey powers in the form of Finland in their final group-stage game at this year’s IIHF Ice Hockey World Championship, Germany rightly hoped for much more ahead of Thursday’s quarterfinal match against another top-six team, the Czech Republic.

After all, wasn’t it just 15 months ago that the Germans stunned the hockey world by getting to the gold-medal game in the Winter Olympics in Pyeongchang.

“The Czechs were the team that we all hoped for (in the quarterfinals),” said Dominik Kahun, who was coming off of his rookie season with the Chicago Black Hawks. “This is an opponent we can beat.”

Through two periods, Kahun and Germany’s hope, or even confidence, that they could get past the Czech Republic and reach their first World Championship semifinal since 2010 looked more than justified.

However, Germany’s first bona fide NHL star Leon Draisaitl, who had a golden opportunity to take the lead on a breakaway in the first, coughed up the puck in the second, allowing the Czechs to take the lead. Still, the Germans, who have proven more than once that they are now capable of coming back from a deficit, capitalized on a mistake by the Czech goalie to even the score just four minutes later.

The Czechs, though, took control in the third, striking first on a counterattack to take the advantage – then converting another. As if to emphasize that all luck had deserted Germany on the night, the Czechs converted another two goals to make it 5-1. It was a scoreline that by no means reflected the actual game, as Germany’s new head coach Toni Söderholm noted.

‘All according to plan’

“Through 40 minutes things were going according to our game plan, and we created some good goal-scoring chances. After that, we were a bit unlucky, and a good opponent will take advantage of this,” Söderholm said.

While Germany’s relatively inexperienced Finnish coach and his players were understandably disappointed by what now may seem like an early exit, there are a number of positives to be taken from how the Eishockeynationalmannschaft fared in Slovakia.

First, based on Germany’s history at the worlds, this was actually no early exit. Eighth-ranked Germany finished sixth at this tournament, their highest placing since they reached the semifinals on home soil in 2010.
Another positive is the fact that by getting to the quarterfinals in Slovakia, they have already qualified for the 2022 Winter Olympics in Beijing. This is significant for a country that failed to make it to the Olympics not so long ago.

Perhaps most impressive, though, is the fact that the Germans actually believed they could beat the Czechs, a team they have a terrible record against and haven’t beaten in 25 years.

“The fact that all of us are so disappointed, shows how close we were,” said captain Moritz Müller of a team that prior to the Marco Sturm era would have been happy just to have reached the quarterfinals.

“We’ve proven that we are a top-eight nation. And our aim now must be to beat the big teams,” he added.
This newfound self-confidence was on display throughout the tournament – apart from Germany’s 8-1 drubbing against Canada. To their credit, the Germans bounced back from that debacle with a credible performance against the United States, another one of the traditional hockey powers.

Early on in the tournament, German Ice Hockey Association (DEB) President Franz Reindl even noted that the atmosphere around the team “reminds me of Pyeongchang”.

But Reindl and the DEB have long been looking far beyond this tournament. After he took office in 2014, the DEB launched “Powerplay 2026”, a program meant to broaden ice hockey’s base in Germany and improve the development of youth players. The aim is to get German ice hockey to the point where the national team will be capable of credibly challenging for medals at the worlds on a consistent basis.

One player who could be part of reaching that goal is 18-year-old Moritz Seider, a defenseman just coming off his first full professional season with Adler Mannheim, with whom he won the DEL championship, Germany’s top hockey. Seider was one of Germany’s bright lights in Slovakia and is widely expected to go in the first round of the NHL draft next month.

And while it may be too early to pronounce Powerplay 2026 a success, what looked a far-fetched goal prior to February of last year now looks a bit more realistic – even after losing 5-1 in a World Championship quarterfinal.