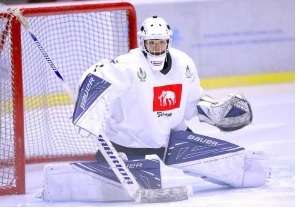 Wasunun Angkulpattanasuk’s life as Thailand’s top national women’s ice hockey goalie has been marked with two pivotal accomplishments that have built her into one of the most competent athletes in the squad.

She played a crucial role in helping Thailand clinch a gold medal at the 2019 IIHF Challenge Cup of Asia tournament held last month in Abu Dhabi, which gave her a huge confidence boost.

“I believe the gold medal is significant in that it will draw the attention of Thai youth towards the minority sport. This is so important to the future of this sport because we are in dire need of fresh local talent,” said Wasunun, 25.

A tropical country like Thailand doesn’t sound like a good place for ice hockey. So winning last month’s tournament is indeed a significant milestone for the sport. Wasunun says she looks forward to promoting ice hockey in the country.

“The Challenge Cup Of Asia is the only meet we get to compete in each year, so despite it being a relatively small tournament, it holds great importance when it comes to becoming a team that has a world Championships,” added Wasunun, who has a degree in nutrition.

One of the biggest barriers to developing ice hockey in Thailand, according to her, is the team not having an ice rink of its own. For the most part, the association rents a rink, and if players decide to train on their own, they have to pay from their pockets.

And ice hockey equipment tends to be pricey.

“Having our own rink will surely develop the sport faster. Despite being national players, we could easily end up paying a minimum of 500 baht to train on a weekday. To keep in shape year round, players have to train three times a week,” said Wasunun, who hopes sponsors will eventually help fund the national squad.

The Bangkok-born athlete said it would be great if ice hockey was highlighted in sport programmes in order receive the exposure it needs to attract raw talent.

Wasunun also is a part-time coach and works for an event company that focuses on ice hockey.

“We have a large group of students from international school that have shown a keen interest in ice hockey. However, while we are happy to have them, I would really like to go and introduce the sport to Thai schools. What we need right now is to build interest,” she said.

“When it comes to shouldering the expense of playing ice hockey, I feel that if we have our rink, the rest of the costs don’t necessarily have to be high. I come from a middle-class background, and have managed to come so far. So I believe there is hope for the rest. What one needs is dedication and a fighting spirit to reach one’s goals.”

That’s a huge feat for the minority sport that rents an ice-skating rink to train.

Making history is even sweeter when it is accomplished with an emerging team, still wet behind the ears with a lack of match experience.

“What this victory proved is that we have what it takes to become successful in the future,” said the 22-year-old Thai-Japanese athlete who turned semi-professional two years ago. “However, each player has to step up their game even more to reach greater heights.” 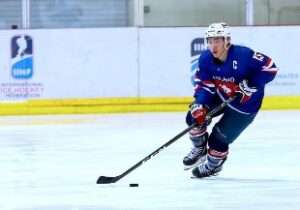 By playing against countries like Kyrgyzstan, a team where half of its players have experience playing in both Russian junior and pro leagues, Nagayama said the Thai team was able to test its skills.

“It is in matches such as these that one gets to brush up on skills, because that is when you can tangibly see areas you need to work on to beat the best in the business.”

While ice hockey is still considered a minority sport, Nagayama hopes to make it more mainstream through the help of social media.

“I think the easiest way is to use social media to get as much attention. I also just started my own hockey clinic called HN Hockey Clinic. This is one way for me to introduce ice hockey to the youth. If this turns out to be a success, my plan is to create a non-profit ‘Learn To Play’ foundation for all Thai kids that otherwise would never have an opportunity to experience this sport up close as it’s not a cheap sport to play.

“Once we are able to develop this foundation, I’m sure that businesses and even individuals would see the benefits of supporting it with their sponsorship. This would help develop the sport that we love.”

Despite being in his early 20s, Nagayama is an old soul. Besides his decade-long years of experience playing ice hockey, both as a national player and semi-professional in Europe and Canada, he comes across as a young man with a good head on his shoulders.

For as long as he can recall, Nagayama saw a future for himself in ice hockey after being introduced to it as a young boy. It was at age 17 that he decided to leave home in the hopes of playing junior hockey in Canada. The entire experience was a learning curve for him. The constant pressure to show results, and the uncertainty of being traded at any time complicated the experience.

“I once got a call from my team in the middle of the night, asking I pack my stuff and leave to be with my new team the very next morning. This gave me no chance to say goodbye to my teammates. This experience made me realise just what it meant to play professionally. Mentally it made me a stronger person, because for one, I knew that if I desired to play seriously I would need to work harder on my performance.”

Nagayama’s goal was to get a full scholarship, and be able to play in NCAA Division I hockey, but it wasn’t as easy as he expected. After just a year of playing in Canada’s Junior A Hockey, he decided to give the US a shot.

“I went for tryouts to a couple of US teams, and also spoke with a handful of schools. I was even invited back to the main camp of one of the NAHL (Tier II) Junior A team. Unfortunately, I broke my wrist during spring training camp in Canada and that very much closed any opportunity I had to play in the US.”

The Bangkok-born athlete had a year left of playing junior hockey in Canada, and so was looking for future options. On his return to Thailand, he received an offer to play for a high-ranking junior league in Sweden. After consulting with a friend that played for a Swedish junior league team, Nagayama felt his calling to play in Europe. “Playing European hockey, where more skills and skating is required due to a bigger ice surface, meant a lot more hard work. I struggled a little bit at the beginning but European hockey really suited me more than North American hockey,” he said.

“After the last year of playing junior hockey, I got an offer from a semi-pro team in Denmark. Here I was fortunate enough to be able to train in the Metal Ligaen, Denmark’s top ice hockey league, pretty much every day.

“Prior to returning home after the season, I got a tryout contract offer from the Denmark top league. Unfortunately, it did not work out, so I returned to play semi-pro.” After two years in Denmark, he pursued a career in a German semi-pro league but was met with disappointment.

Today Nagayama is focused on developing ice hockey in Thailand, and with the amount of perseverance he puts in, it will surely not be long before he sees the fruits of his hard work.