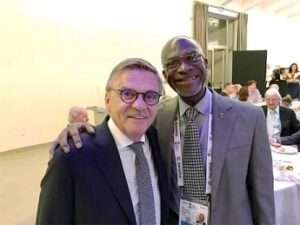 The Jamaica Olympic Ice Hockey Federation (JOIHF) has received the backing of several countries that want to see the development of the sport, including the creation of a skating rink on the island. This was at the annual congress of the International Ice Hockey Federation (IIHF), held in Slovakia. Jamaica, represented by JOIHF director Don Anderson and national coach E.J. Phillips, participated in the event for the first time.

The JOIHF says that the two-man delegation created what it describes as a “considerable degree of excitement and interest” from their presence and says they were very well received. The federation says that the interest was also a result of Jamaica’s participation in the bobsled event at the 1988 Winter Olympic Games in Calgary, Canada.

Coming out of the congress, a group of the associate members, those without an ice rink at this time, formed an organisation to lobby more effectively with the IIHF. These countries are, in addition to Jamaica, Ireland, Portugal, Argentina, Macedonia, and Andorra. The congress coincided with the 16-nation Men’s World Championship, which was won by Finland.

The JOIHF says that it is now in dialogue with a number of companies that have built and maintained ice rinks in climates similar to Jamaica’s.