U.S., Mexico to bring historic rivalry to the ice rink in El Paso 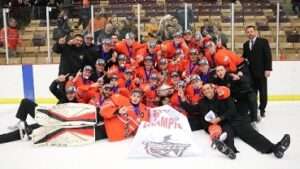 For the first time in history, Mexico’s national junior ice hockey team will take on the national Western States Hockey League Thorne Cup Champion El Paso Rhinos in a historic border battle in the ice rink, and it will all take place in El Paso, officials announced today.

The official U-20 Mexican National Team will visit the Sun City to face off with the Rhinos for a special two-game exhibition series at 7 p.m. Saturday, Sept. 28, and 4:30 p.m. Sunday, Sept. 29, at the El Paso County Coliseum Events Center, 4100 E. Paisano. The Rhinos will be wearing special El Paso-themed jerseys that will be auctioned off, along with Mexico’s team jerseys, following the games. Tickets will start at $5, plus fees, and will be available, beginning Sept. 1, at the Coliseum Box Office, all Ticketmaster outlets, by phone at 800-7453000 and online at ticketmaster.com.

This series will be the first of its kind. No other junior hockey team in the United States has played a team comprised of Mexico’s top players.

“Any time you can play a national team representing their country, it is a huge deal,” said Cory Herman, head coach of the Rhinos. “They compete at the World Junior Championships every year, and it is exciting for our organization that they chose us to play.”

The IIHF Ice Hockey World Junior Championship is an annual event organized by the International Ice Hockey Federation for national under-20 ice hockey teams, which feature some of the best players from around the world.