Hockey under the Pacific sky in the Philippines 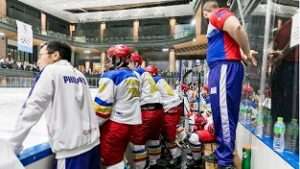 It is difficult, if not unthinkable, to associate ice hockey with a country bathed in the warm waters of the Pacific. And yet, our national sport has made its way into the sun under unlikely circumstances.

It’s 1992. The Mighty Ducks is coming to the screens around the world. At the same time, the owners of a chain of shopping centers set up the first two ice rinks on the Philippine territory.

In a country where basketball is king since the passage of the Americans during the Second World War, it remains a drop in the ocean.

For François Gautier, son of a French father and a Filipino mother, it is love at first sight. He absolutely wants to try this sport that seduces him as much by his speed as by the skills he requires.

He is then 6 years old. His older brother and a group of friends are practicing the basics of hockey with all the equipment of skates and used gloves, sticks and pucks that their mother brought back from a trip to the United States.

They meet once or twice a week to play hockey, a sport that is not available on all budgets, let alone in the archipelago of 7600 islands.

“Even today, it’s impossible to find a pro-shop to stock up on hockey equipment. The appearance of online orders is a blessing, even if it takes sometimes to wait a few months to clear the precious goods. A program of the International Ice Hockey Federation (IIHF) has recently delivered 60 complete equipment that will be made available to less well-off young people wishing to practice hockey,” says Francois Gautier, contacted by phone when he came from leave the rink after a training session.


It was almost 11 pm in the Philippines, proof that ice time is rare there too.

With the impetus of passion

After a stay in France for higher education, François Gautier returns home. It is 2006 and he finds that hockey stagnates in the Philippines. He decides to take things into is own hands.

In the space of a few years, the number of players has increased from 30 to more than 330 boys and girls combined (70% boys), according to the most recent census conducted by the Philippine Ice Hockey Federation. of which Gautier is a founding member.

On the national scene, a four-team league brings together the best men in a championship open to foreign nationals living in this island state. Most of them live in the Manila area. Competitions also take place in the other categories, for both men and women.

This federation was created in 2015. It is associated with the International Federation (IIHF). Thanks to the presence of a handful of players with dual nationality, the progress made was quickly encouraging.

Some players were born to Filipino parents, but grew up far from their ancestral lands. One of them, Carl Montano, who  is from Vancouver and since 2011 has directed the minor hockey program. 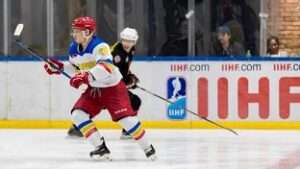 On the international scene, François Gautier and his small band of enthusiasts begin to reap the benefits of their hard work.

In 2017, in Kuala Lumpur, Malaysia, the national team signed the biggest victory in its short history. the National team won the gold medal at the South East Asian Games (SEA Games) with victories against Indonesia, Singapore, and especially a 5-4 win against Thailand in the final.

In this part of the world, Thais represent the great power of hockey.

According to François Gautier, this victory for the Philippine team was their own version of the “Miracle on Ice” produced by this group of American academics against the machine of the Soviet Union at the Lake Placid Olympics in 1980.

Filipinos will host the same tournament next November. The team will have the opportunity to defend their title in front of their fans, an important prospect in the eyes of Gautier.

In addition to the fact that the coach of the national team is Czech, Filipino hockey still relies heavily on external influences to ensure its progress.

Like all the other leaders of the national team, Daniel Brodan acts as a volunteer. He works full time with a credit company based in the capital, Manila.

When he does not act as a broker in his father’s insurance business, François Gautier lives, breathes and eats hockey.

Honestly, we are only four to work to make our federation live. I have a lot of hats. I am both vice-president, chief referee, I am a player on the national team, I am a junior coach, I am an organizer of tournaments and events. All I need is driving the Zamboni … (laughs)

We are a young federation. We have everything to learn. There is still a lot to do. Every year, I go to the IIHF congress. I speak with everyone, with all major federations. I discover what works or what works less well. Their opinion is important to us.

It is in this spirit that François Gautier met Michel Brind’Amour, Chairman of the Board and Director of Development at Hockey Canada, at the recent World Championships in Bratislava, Slovakia.

We discussed a possible collaboration to organize the preparation of our national team for the defense of the gold medal at the South East Asian Games in November. Options are being studied for more intense training. Nothing is confirmed yet, but discussions are ongoing. It remains a matter of budget and availability on the Canadian side.

Asked to ensure his back, he also began talks with the Finnish Federation.

“That’s great because they just won the World Championship against Canada. We also have a few players from our women’s team who live and play in Australia, which facilitates contacts between our federations” , he adds to demonstrate the means implemented to raise the level of play. 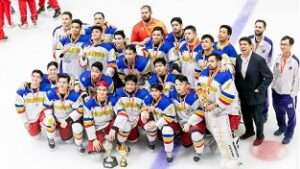 The Philippines team, silver medalist at the Challenge Cup of Asia last April

Beyond defending the title at the Southeast Asian Games, Francois Gautier believes that the Philippines will soon compete with countries like Kuwait, Malaysia and Kyrgyzstan to carve out a place in Group IV at the World level.

He sees even further and bigger.

“I hope that in three to five years we will be in division 2B. I think it’s feasible. I know the teams playing in 3A and 3B and I think we are at the same level, ” says the one at age 35 is the oldest player in his national team. The youngest is 16 years old.

The IIHF Division 2B is composed of Israel, which will become 2A by 2020, Iceland, New Zealand, Georgia, Mexico and North Korea.

“At the same time, I hope that our women’s team will also be involved in a world championship. I hope to recruit more girls to achieve this. It is true that he still has a sacred level.”

Note that the Philippine women’s team has not yet reached the lowest division in the world.

Gautier aims above all for more stability within the Philippine national program.

“We are still at the trial and error stage, he says. We do for the best with what we have. We hope for a little more support. Our government is helping us through the National Sport Commission. The president of our federation, Christopher Sy, contributes significantly, especially because he has the means. But it would be nice to have more commitments from the private sector. “

Mr. Sy owns and / or runs numerous businesses in areas as diverse as internet security, catering, the coffee trade and gas distribution stations. 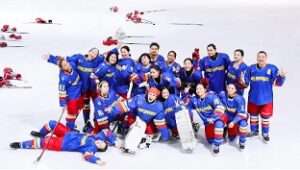 In the meantime, François Gautier and many of his hockey fans are very interested in the activities of the NHL.

Wednesday night, June 12 (Thursday morning there), National Independence Day in the Philippines, Gautier had lunch watching the seventh game of the Stanley Cup final between the Boston Bruins and the St. Louis Blues, won by the Blues .

Subscriber to the NHL application, Gautier vibrated at the same time as us, on his side of the planet hockey.

He did not take either of the two teams. He is still a fan of the Anaheim Ducks, a team he saw on the big screen in 1992 when his name was Mighty Ducks and aroused his passion for hockey.