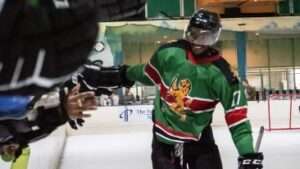 Kenya’s “Ice Lions” celebrate a goal at the Madaraka Day Cup in Nairobi where they were challenged by selections of local Americans, Canadians and Europeans

While the season is over in many hockey countries in the northern part of the world, ice hockey is being played at places you may not necessarily expect. On the equator of all places, an ice hockey tournament was inaugurated. Small indeed, however, undoubtedly substantial for its enthusiastic organizers: the Madaraka Day Cup.

The Madaraka Day Cup is the first international ice hockey tournament hosted in Nairobi, Kenya and marks another milestone in the early existence of Kenyan ice hockey. It involved the local Kenya Ice Lions against teams made up of members of embassies and NGOs from Canada, Europe and the United States.

And this is what it looked like the moment the Kenyans beat Canada:

What originally started as a gimmick a few years ago, providing ice skating opportunities to the guests of the Panari Hotel in Nairobi, has grown out of proportions and became an undisputable quest for recognition by their peers of the worldwide ice hockey community for the continuous growing number of Kenyan ice hockey players.

“Madaraka Day, a national holiday in Kenya which is celebrated on 1st June of each year, commemorates Kenya’s anniversary of gaining internal self-rule from the United Kingdom,” explains Rob Ao Opiyo, one of the players of the Kenyan Ice Lions and involved in the local organizing committee of the tournament. Madaraka in the local language translates as ‘power’ or ‘responsibility’.

“As told by Benard Azegere, one of the early ice hockey players, Bruce Strachan, came up with the idea in 2016,” further explains the Kenyan. “We played weekly pick-up hockey on Wednesdays. One week to the national holiday they were going for drinks, and Bruce said we should play for a 4-a-side Madaraka Day Cup. Since our original hockey jerseys came around the same time, they were also part of the inspiration. It was just a single game then. We called the opponent Team Ethiopia with Bruce Strachan, Takano, Paul Dormant and some others. The team members were expats with a hockey background working in the country. Most likely the name came about since Bruce just arrived a few days before from Ethiopia. The naming was rather for laughs. Team Kenya had about 3 Kenyan players: Jeff Magina, Amos Mungai and Benard Azegere. In total there were 12 players. It was not more than a pick-up game at that time really.”

However, this first edition of the tournament brought a big crowd to the ice rink. “The inaugural tournament was a life changing moment, mainly because normally when we are playing at the ice rink we never had that number of fans and spectators coming down to cheer for us,” says Rob Ao Opiyo. “So, for the first time we actually saw many fans and especially Kenyans. It felt like being at a Kenya rugby game, but now they were at an ice rink instead,” he jokes.

To bring in the fans, the organizers did their own promotion. “Most of the publicity to promote the game was through word of mouth, reaching out through family and friends. We put out some posters on social media as well. Also, the Panari Hotel where the ice rink is located helped us promoting the tournament,” says Ao Opiyo.

It helped as both local and international press was present providing some media coverage for the event. “We reached out to media outlets that reported on us before. So, we’re quite happy how this turned out. We had CGTN, a Chinese Station, Voice of America, the Standard newspaper and also ZDF, a German TV-channel which is working on a story about the Ice Lions.”

Ice Lions vs. the World

The Ice Lions’ opponents in the tournament consisted of teams with expats working in the embassies and NGOs in Nairobi. “Tim Colby is our head coach and the person who’s helped us grow both as players and as a league in the making. He’s the one who reached out to various embassies in Kenya such as the U.S., Canadian and also European embassies calling for interested parties to join in. We also got players who occasionally come to the rink to play with us during our practice sessions. The Finnish ambassador, Erik Lundberg, was among the players for Team Europe.”

Due to the size of the rink, the games were played 3-on-3 with goalies. “We planned to have nine players a side,” says Ao Opiyo. “Unfortunately, some teams, such as Team Europe, didn’t have enough players. On Sunday, the last day of the tournament, some of the Kenyans volunteered to help balance the numbers. The importance was to have fun playing hockey after all.”

“Looking back at the first game played in 2016, it was just something for fun,” Ao Opiyo reminiscences. “That game was scheduled during our regular pick-up hockey session and played by whoever could make it. This tournament is a major moment for us Ice Lions. After our first international game with the UN and Slava Fetisov to highlight the issue of global warming, we took it to the next level with staging our first international tournament, as participants and hosts. Given the fact that Alibaba sent us out to Korea to explore the Winter Olympics and Tim Hortons sent us to Canada to play with Crosby and MacKinnon, we’re making progress and we’re serious in wanting to develop ice hockey here in Kenya.

“This amount of exposure strengthens us, but it also helps us to remember that we started off as a couple of guys having drinks and saying, ‘let’s host a tournament’. It’s just the beginning and I truly hope that when we are planning for the next event, we are seeing more players and teams coming in from abroad and also more funds turning up. So, there is a lot to look forward to from these experiences.” 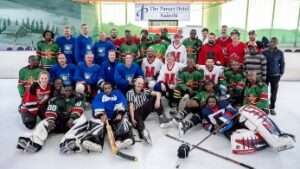 The four teams post for a joint team photo following the 3-on-3 tournament.