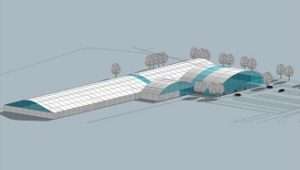 Plans to build a new sports centre with an ice rink on the Isle of Wight have been submitted.

The island has not had an ice rink since the Ryde Arena closed in 2016, leaving skaters and ice hockey teams with nowhere to train.

A proposed indoor multi-sports facility would be built next to Smallbrooks Stadium and include tennis courts, a climbing wall and soft play area.

The group behind the plan hopes it could open within the next 12 months.

The Smallbrook Ice and Leisure Centre (SILC) group is made up of Ryde Arena Community Action Group (RACAG) – which has campaigned to re-open the old derelict ice rink – Ryde School, the Isle of Wight Council and other sports clubs.

It is in the process of applying for various grants, including Sport England, to raise funds for the project. 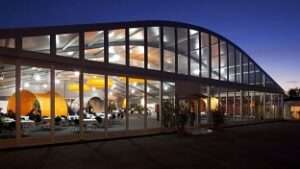 SILC is now trying to raise funds for the new centre by applying for various grants, including Sport England

Malcom Marshall, from RACAG, said he was “delighted”, adding it “will bring back skating and ice-hockey to the island along with a wide range of other activities for all islanders”.

As well as a full-size ice rink, the plans include two multi-sports courts for netball, volleyball, basketball, badminton or croquet, three tennis courts, a cafe and sports shop.

Ryde Arena, on the seafront, was shut by bailiffs 18 months after being taken over by a community group.

This was condemned by Isle of Wight Council, which owns the freehold of the building, which has been left “mothballed”.