With a total population of just 3,198 people, Falkland Islands is the smallest hockey nation to play organized ice hockey. We had a change to talk to Sam Cockwell PR and Media Coordinator and also the Vice Chairman of the Falkland Islands Hockey Association.

How does an Island of about 3000 people have an Ice Hockey Team?

It’s taken a few years to get to where we are, and while we compete in ice hockey our normal leagues are all inline. Our success comes from a strong youth development through the club, the head coach is brilliant and takes the youth development really seriously which then encourages parents, brothers and sisters and friends to give it a try. The interest has grown every year, and as an indoor sport Hockey doesn’t rely on the whims of the weather like many other team sports. Apart from that those that try it just love it, what can I say, hockey has just grabbed the imagination of our little nation!

When was The Falklands Island Hockey Association form and how many different programs and teams are there?

We started out playing deck hockey in 2006 with a light street hockey style puck; this was started by a few people here including our head coach Grant Budd. This was all there was until 2015 when Grant started up a youth inline part of the club, they went away with a few adults to Punta Arenas to compete in a competition there and did really well. It then grew each following year and we have had 5 leagues of inline across 5 age ranges for the last couple of years now with around 20 teams in total and approximately 150 players (some play in multiple leagues).

The basic structure is all about youth development with it starting at Peewee, then Junior, Rookie, Elite, and finally the Senior league which includes the adult inline players. We also have training throughout the off season for all different abilities and ages to keep their skills tight and introduce new people to the sport. 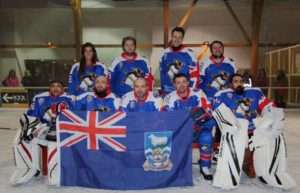 Where does funding come from to keep exciting programs going?

We receive a lot of funding for equipment and team livery from a few local businesses, Seafish Chandlery, Fortuna, Energise, Tonedog Designs and Sure a are a couple of the long standing ones, along with some very generous individuals who donate every year, and a huge number of other businesses which support us. We also fund raise ourselves throughout the year by having special games and events, and recently had a whole day of games which raised well over £1000. Everything helps with supporting the club, and we also have some merchandise for sale in stores which gives a good trickle of funds especially in the summer when the tourists are in town. We also rely a lot of the committee to dedicate time and effort to the club, and have been really lucky to have such passionate and dedicated people to run it. 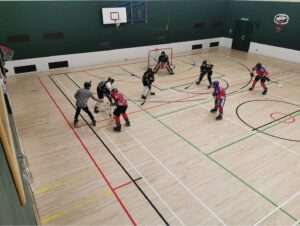 The team in Red are the U16s team for Miami, and the Black are the best team from our 2019 league with a few extra senior players from the ROTW team going to LATAM Cup also 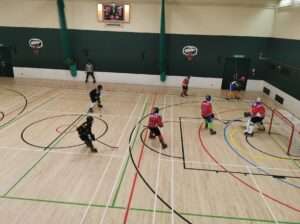 The Falkland has taking part in international competitions in the past, but this September you will be at the Latam Cup which will the biggest competition that the Island has taken part in with Men and a U16 team. How are you preparing the teams for this event?

We have been training together for this event over the last 4 months with a lot of time at the rink. It is tricky as our whole playing space is only a tiny bit bigger than the end zone of a normal rink so we have to try and devise special drills to get better in the small space we have. We are also going to be going away a week before the tournament to get some ice time and convert from inline to ice. All of us have done that before in the regional tournaments so we hope that it will not be too bad, but all you can do is give it everything you’ve got and put your best into it.
We are also doing a lot of video sessions watching and critiquing the recent games in the IIHF world cup, which is helping our team look at strategy, set plays, and player development.

I don’t want to spend too much time on this but I do have to ask. Politics and Sport don’t mix and there has been some friction between Argentina and the Falklands Islands over your participation’s at the Latam Cup. Do see way that two sides can come to some kind of an agreement for future events?
After all everyone has the right to play.

It’s impossible not to mention it, and we don’t want to dwell on it either. I can’t say what motivates the issues from the sporting bodies in Argentina, but our experience of playing with teams from Argentina has always been positive. I am confident that the Argentine team our U16s will play against in Miami will be exactly the same, and I hope that both sides get a positive experience from it. I have a good feeling that all the players and coaches love for the sport will eclipse any political issues or tensions. I hope that we can arrange some friendly training together or maybe a friendly game or two for after the tournament with our Argentine neighbours as well as the other teams in the contest; really we are all just people who want to play hockey. In our view that’s all that matters.

With regard to the future, I hope that the organizers and bodies from countries that attend will see that the more that attend the better the contest and the better for the sport. So I hope once we have met and broken through the barriers to communication we will be able to work on a productive and positive future for the sport in the region. 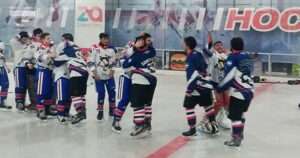 Penguins and Nires (Ushuaia) congratulate each other after the game at Puerto Williams, Chile

The Falklands Islands has no ice rinks, are there any future plans to have one built?

We really hope so! There is a plan for a new sporting arena that is currently being designed, we have lobbied hard and got a lot of community support for the design to include the pipework in the floor for an ice rink. It will already have the boards and floor markings etc. for inline hockey, but we hope that if we can get the pipework included in the start then we can fund raise and look for support for the associated plant to go in another phase of the development. At the moment its watch and wait, but we are hopeful that there should be some news on this soon, especially as the sport continues to grow. Currently inline hockey is the most popular sport in the Islands, and with ice we think it could become even more popular.

The Falkland Islands takes part in the Islands Games but there is no hockey at this event. Is there a push to have Inline or ball hockey in future games?

We recently learned that Bermuda have an inline and ball hockey league, which is great news, and we are part of the Falkland Islands Overseas Games Association (FIOGA) which is the body for the islands games here, and they are interested in the potential for hockey in the future either inline or ice if possible, however we haven’t yet put a plan to the Island Games, but it is definitely on our to-do list.

With the game of ice hockey growing on the Island do see other British territories picking up the game in the future?

We hope so, although many of the other Overseas Territories do already have other sports which they focus on. There is the example of Bermuda which has a strong hockey in place already so we are hopeful that there are links there. We have a good relationship with the Foreign Office, and they are very supportive of international sport events, so there is a good chance that through that relationship we could look at an overseas territories kind of game or development of the sport. Of course we would be delighted to help any new clubs anywhere and overseas territories even more so.

What would you say is unique about playing hockey in the Falklands Islands?

There are several things; probably the main one is exclusivity. As we play a very low contact inline hockey we are able to have a totally mixed gender league, and with a mix of ages. For example if there is a young player which has a dedicated and mature approach to the sport and a high level of skill, when we will often allow them to also play in the league above as well as their primary age group. This helps individuals develop and also gives each tier something to aim for and drive them to push themselves. In a similar way we also have a total mix of abilities which we spread out through the teams in each year when they are picked which helps everyone develop and grow, and keeps the leagues competitive.

We fundamentally believe that everyone should have the chance to play and enjoy sports, and that’s really the basis for our club.