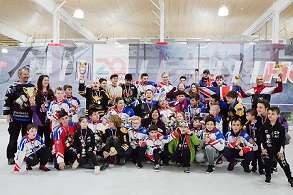 The small nation may be famous for a war, but through the work of a group of dedicated individuals, hockey is quickly picking up steam in one of the most unlikely destinations. This is the story of hockey on the Falkland Islands.

Roughly 3,000 inhabitants call the Falkland Islands home. Around 150 of them play hockey.

Located just south of Argentina and 5,600 miles from Miami, Fla., the Falklands are the smallest hockey nation on record, making up one of the 14 British Overseas Territories. The Falkland Islands have the 222nd largest economy out of 229 nations according to the GDP, and many of the Falklands’ culture traditions stem from British settlers.

So, naturally, it’s a perfect place for hockey.

In fact, when you visit the Hockey Hall of Fame, you’ll find Ryan Bahl’s jersey from the 2015 Copa Invernada Tournament in Punta Arenas, Chile, the first ice hockey tournament the Falklands took part in. It was a ceremonious introduction to the sport for the nation, which won all four games to take home gold. The kicker? There isn’t an ice rink on the Falkland Islands. Granted, a few of the players had experience on ice, but it was a new venture for some and the first time the group got to play on the ice together.

Winning gold in your first attempt is hard enough, especially when you have limited experience on the surface you’re playing on, but to follow that up with another medal? Good luck. But since 2015, the Falkland Islands have won bronze in Costa Rica at the inaugural International Ice Hockey Tournament, featuring club teams from Canada and the United States and gold at all four levels of the 2018 Mega Patagonian Cup in the Punta Arenas. They’ve never actually finished a tournament without winning a medal, which is almost unheard of.

Since there isn’t a local ice rink, players take part in dek (ball) and inline hockey, allowing them to develop basic footwork skills to get them up to speed for their annual adventures on the ice. Former British pro ice hockey player Grant Budd started dek hockey in a small gym back in 2006, with inline launching in 2017 – with player involvement growing rapidly. The gym is only just a tad bigger than a zone in an NHL-sized rink, but they make do with what they have.

Now, the Falkland Islands are ready for the big stage, relatively speaking.

In early September, the organization will make the jump to 5-on-5 hockey against other international teams at the Amerigol Latam Cup. The tournament, put on in partnership with the Florida Panthers in Coral Springs, Fla., features teams from North and South America in men’s, women’s and U-16 levels. It was previously known as the Pan-American Ice Hockey Games, with Colombia and Mexico being the teams to beat each year (Mexico is lone full IIHF member, allowing it to participate in IIHF tournaments). Canada even sent a team once, winning the inaugural tournament in 2014 back when the Mexican federation organized it. The goal is to help grow hockey in the in the Americas. but participation opened up to the Caribbean to allow further growth. Jamaica and Puerto Rico are among the other teams making tournament debuts.

The 2019 edition of the Latam Cup – the second in its current form – will mark the first time Falkland has participated against a tournament full of international teams, but with a catch: you won’t find a team called the Falkland Islands on the schedule. The second division men’s unit will be called ‘Rest of the World,’ with players also coming from Canada, the United States, Norway and the United Kingdom. The youth team, Stanley, will play against Argentina, Colombia and the United States in the U-16 division. 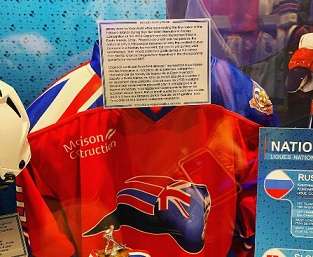 Ryan Bahl’s jersey in the Hockey Hall of Fame

Experience is not on the side of the Falkland Islands. Take team media coordinator and vice-chairman Sam Cockwell, for example. Cockwell didn’t play hockey growing up, but the sport’s speed and competitiveness hooked him almost immediately when he first tried it a few years ago.

“(Grant Budd) said, ‘You’ve got to try inline because you like playing dek hockey,’ ” Cockwell said. “I was the worst skater anyone has ever seen. But since then, it has taken over my house and my life. Through the friendships you make, and the people you know, it has been an amazing club to be part of.”

The Latam Cup is a small start, but baby steps are needed to help the team grow. The goal at first was to go to Chile and just have a good showing: medals at both iterations they played at helped. Cockwell hopes the local government will see the sport continue to grow in the Falkland Islands and eventually build a small rink to play ice hockey on regularly. The Falkland Islands are not close to playing in any IIHF tournaments, but the growth over the past few years is impressive: from ball hockey in the gym to travelling to other countries and continents to play on the ice, the team members have had to overcome challenges just to play the sport they love.

“There’s been incredible support here in terms of helping us get sponsorship to pay for flights because it is horrifyingly expensive for us to go to Miami,” Cockwell said. “We’ve had a few big sponsors every year that have helped us out with accommodation, and a lot of them help us buy equipment.”

The team takes pride in the youth program, developing kids early with hopes of building a solid foundation for the senior squad. It’s a long-term project but one with a true aboriginal feel.

“They’ve just developed so much,” Cockwell said. “They’re actually becoming very good hockey players. We went from there being one youth league – the elite league is what it’s called now – to there being four youth leagues and a strong senior league as well.”

In a sport as expensive as hockey, building a homegrown program without major government assistance is challenging. There’s no positive return on investment, and everything comes at the expense of missing work and leaving loved ones behind. A team this small has its share of obstacles – it’ll cost more than $2100 for each player to participate – but the love of the game makes it worth it.

“Just being on the cusp of this big kind of level change for us, going from regional to a national level, it’s an exciting time for us,” Cockwell said. 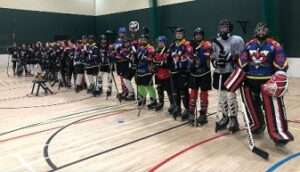