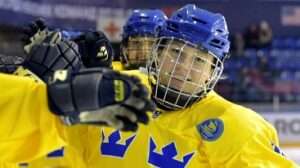 Swedish women’s hockey has had mixed news recently in international ice hockey. While the senior women’s national team’s relegation last spring was one of the biggest upsets and ended up with a battle off the ice for better conditions, the U18 women’s national team surprised with a tournament win.

Never before had a Swedish national team been relegated in an IIHF Ice Hockey World Championship event before but in spring it happened after Sweden’s “Damkronorna” lost to the Czech Republic, Germany and Japan. Four months later there was no such thing as a fresh start on the ice when the senior women’s national team was supposed to meet for a camp back home followed by the Euro Hockey Tour in Finland where – opposed to their status in IIHF play – they would have met the top nations.

43 national team players joined a strike, many posted a message on social media on 14 August with the hashtag #FörFramtiden (“for the future”) where they declined the invitation to the camp. With heavy hearts but with reasons the players’ association SICO revealed two days later with ten demands.

One major one seems to be on the way to be solved when the Swedish Ice Hockey Association and the (men’s) Swedish Hockey League announced a financial solution for the women’s national team program including compensation for loss of earnings when players join the national team camps that will be paid through the clubs of the Swedish women’s hockey league SDHL.

With more discussions scheduled between the association and the players representatives, that could solve a major stumbling block as the lack of compensation for the players, who in most cases play their club hockey as amateur players, was the straw that broke the camel’s back.

Since winning the historic silver medal at the 2006 Olympic Winter Games the results of the Swedish senior women’s national team have only known one way: down. 4th in Vancouver 2010, 4th in Sochi 2014, 7th in PyeongChang 2018 and 9th at the recent Women’s Worlds. The result at 2018’s Olympics also resulted in lost financial backing of the Swedish Olympic Committee for women’s ice hockey, which was the starting point of the financial issues for the funding of the program and financial support for the players.

“We have not seen any positive development in recent years. Compared to 2015, the programs are not stronger, the players are not physically better and the results are worse,” Swedish Olympic Committee CEO Peter Reinebo explained to Swedish broadcaster SVT. After the recent issues and negative press, they may be open to rethink the funding issue when meeting with the Swedish Ice Hockey Association in September.

“It has to do with whether you decide to invest in achieving international success. Our organization is not for a national team to function well, but to be able to win Swedish Olympic medals.

“Ice hockey is important in our country. After all, we got off because we were disappointed with the development. We want to turn it around, this is clear. I hope and believe that they can put the ambition together. But 2022 is a short-term perspective.”

Bad results caused funding from the Swedish Olympic Committee going away after the team hasn’t shown results. But this step is unlikely to improve those results as the relegation has indicated. It may even fuel the downward spiral. Next spring Sweden will have to travel to Angers but not to play the creme de la creme of women’s ice hockey but to play in the Division I Group A against host France, Norway, Austria, Slovakia and the Netherlands to be able to get back to the top level. That will also prevent them from earning enough world ranking points to be automatically qualified for the 2022 Olympics. The “lady crowns” will have to go through a qualification tournament in the 2020/2021 season.

Last Thursday there was a first meeting between the Swedish Ice Hockey Association and the players’ association SICO to solve the situation with the hope to end the strike soon.

“In general it was constructive and good. There were many good questions from them and I hope we were able to answer them. The representatives from SICO were satisfied with the answers for now but so far we have no final agreement,” General Secretary Tommy Boustedt told SVT after the meeting and mentioned that one major issue, the players income loss for playing on the national team, was solved. The players’ side will now work on a proposal for a three-year agreement. “I think we are close to each other in all the issues raised.”

The good news came the next day when the association found an agreement with the Swedish Hockey League that will contribute up to SEK 400,000 (€43,000) a year for the compensation of earning losses for women’s national team players through the clubs of the Swedish women’s hockey league SDHL during the next three years. A similar agreement had been set in place for 2018/2019 but expired. The Swedish Ice Hockey Association will also use SEK 450,000 for further investment in the development of Swedish elite women’s hockey.

“I’m pleased that we found a solution for the players of the women’s national team for compensation of lost earnings for the next three years but also that this is done with the agreements we have between us and the leagues. Some questions remain in our discussions with the players and SICO and that, thanks to the SHL, we can now solve one of the important parts about compensation also provides good conditions for our continuing discussions,” the Swedish Ice Hockey Association’s chairman Anders Larsson said in a statement after the announcement on Friday.

In a few weeks Sweden is scheduled to host Canada, Finland and the United States for a Four Nations Tournament in Lulea, 5-9 November. If everything turns out well, it will be the first tournament under the new agreement that will run until 2022.

Good news for the future

In the shadow of the conflict there was some good news for the future as well. The Swedish U18 national team has been medalling more regularly in IIHF competitions recently. It had to settle for 5th place last winter at the 2019 IIHF Ice Hockey U18 Women’s World Championship but now hit the headlines with a win of the Four Nations Tournament in Jihlava in the Czech Republic. There the Swedes left the hosts, Russia and Finland behind.

The team started with a 3-0 loss to Russia, which scored all three goals in the last six minutes of play including two from Varvara Boriskova, but then got two wins that were enough to move up to first place.

Malou Berggren and Linnea Johansson scored the goals in the 2-0 win over the hosts while goaltender Ebba Svensson Traff earned her shutout with 29 saves.

While Russia lost the other two games, the Swedish juniors had a big win on the last day. Amanda Ahlm and Thea Johansson opened the scoring against Finland late in the second frame and Hanna Thuvik made it 3-0 late in the game to beat the Finns for first place in the tournament. Ida Boman had 23 saves for her shutout.

The Czechs had the scoring leader with Tereza Mazancova (2+2=4), Boriskova was the best goal scorer with three markers while two goaltenders led the goalie stats ending their one game with a shutout, Svensson Traff and the Czech Republic’s Viktorie Svejdova.