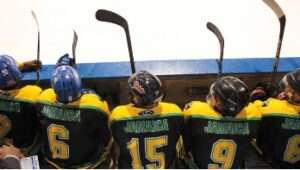 For many people it may be difficult to associate Jamaica, a tropical nation, with ice-hockey; field hockey, yes, but ice-hockey? But on Friday the Jamaicans proved that they are a formidable, talented team on skates and on ice-making their debut in the Amerigil-Latam tournament.

In 2014, Jamaica was granted associate member status in the international ice hockey federation (IIHF), and since has developed a talented under-age 20 team which have been playing regularly in Canada.

Jamaica was invited to compete in the Amerigil-Latam tournament to play against Latin American countries at the senior men’s level. Jamaica is playing in the first division against Venezuela, Colombia, Mexico, Chile, Brazil, and Argentina.

Players of Jamaican citizenship and/or descent attended an evaluation camp in Toronto this spring. Players from Canada, USA, and the United Kingdom were evaluated vying for a position and a rare opportunity to represent Jamaica on the ice. Some of the young men from the under 20 team are included in the roster of the team playing in the South Florida tournament.

The Jamaicans will be up against Brazil at 3:00 pm on Saturday and according to tournament experts are favorites to win this game also.

​The New Zealand Ice blacks have won back-to-back series against rivals Australia for the first time.

Piggybacking on their game one success at Winter Games NZ in Queenstown, the Kiwis beat the Aussies 5-3 on Friday night to snare the Trans-Tasman Challenge Cup.

With a series sweep on the cards, times certainly have changed since the Aussies recorded a world record 58-0 shellacking of the Kiwis in Perth in 1987.

Australia struck first in game two courtesy of an early loose-puck goal swept into the net by Patrick Nadin. However, the Ice Blacks weren’t down for long, as the dynamic top line duo of Liam Stewart and Matt Schneider combined for a gorgeous goal shortly thereafter.

New Zealand goaltender Csaba Kercso Magos left a few juicy rebounds lingering in the crease, and finally Australia were able to poke another over the goal line as Jonathan Bremner batted a quick goal in after a series of attempts.

The Roos were dominant for the remainder of the period, but all that possession time was for nothing as the final goal of the period was scored by the Ice Blacks.

Debutant Ondrej Kozak drifted into the offensive zone and patiently outwitted both his defender and goalkeeper Charlie Smart to dish the puck to Ben Gavoille. The horn blew with the score knotted up 2-2.

The second frame started with an early power play for Australia, and high-scoring skater Wahebe Darge combined with Kai Miettinen for the go-ahead goal, sending the Roos up 3-2.

New Zealand leapt on the opportunity to tie things up on the power play, however, with Matt Schneider scoring his second of the game down low on the man advantage.

The Ice Blacks weren’t done with their second-period scoring yet as Kozak and Gavoille combined for their second goal of the game, a beauty of a top-shelf goal that’s certainly going to make the rounds on the highlight reels.

The third period was shorter on goals but not on action, with tempers threatening to simmer over as both teams threw some big hits.

Australia got some power-play opportunity but weren’t able to convert. In fact, the only goal of the period came courtesy of Liam Stewart, who sailed into the Roos zone past all four defenders for a beautiful solo effort goal that put the Ice Blacks up 5-3. 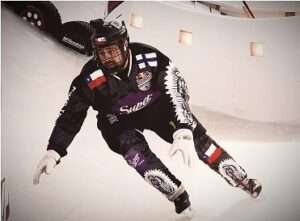 By Foreigners In Finland

The future of ice hockey is the south says Juan Carlos Otero, the general manager of the University of Miami’s ice hockey team, in an interview at NHL.com. The Latam Cup originated in 2014 and it has grown since then, adding more groups and country members each year. Most of the Latin American countries will also be there: Mexico, Puerto Rico, Venezuela, Brazil, Argentina, Colombia, and the Falkland Islands. There are also hockey games for the seniors, ladies, youth 16s, and children 12s divisions.

He was born in Finland by Chilean parents who sought asylum. Since he was a young boy, he has always loved playing ice hockey and remains an enthusiastic winter sports fan. He participated in Red Bull Crash Ice a few years ago and made it to the finals. He has about 1200 supporters, most of them from Latin America. He joined the competition when he was already 36 years old and until today, he is one of the pioneer Latino representatives in the Crash Ice Competition.

This hot blood and chill Latino cannot only skate but also jump and crush some ice. He can also play ice hockey. So why should he not bring the championship to Chile?