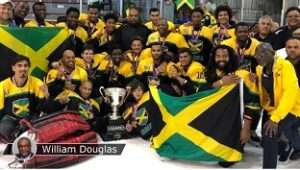 R. Oliver Mair said some friends gave him puzzled looks when he told them that he planned to watch Jamaica play hockey over the weekend.

“When I made the announcement that Jamaica was going to play in hockey everybody was, like, ‘Who? Jamaica?'” said Mair, the Caribbean nation’s counsel general in Miami. “I mean, the [Jamaica Olympic] bobsled thing happened years ago but ice hockey, this is a surprise.”

Jamaica shocked the 2019 Amerigol LATAM Cup on Sunday by defeating defending champion Colombia 3-2 in a shootout at the Florida Panthers IceDen.

It feels unbelievable, we just made history,” said Jamaica forward Jaden Lindo, who was selected in the sixth round (No. 173) of the 2014 NHL Draft by the Pittsburgh Penguins. “This is something that Jamaica is never going to forget.”

Jamaica’s team was comprised of players, like Lindo, 23, who are of Jamaican lineage but live and play hockey in Canada and elsewhere.

Colombia also had its share of foreign-born players, including forward Michael Nijjar, a Los Angeles native who is a minority owner of the Vegas Golden Knights.

It also had a few elite players including Daniel Echeverri, a Medellin-born defenseman who scored Colombia’s first goal of the game in the second period. Echeverri, 29, appeared in 52 games for Macon of the Southern Professional Hockey League and Greenville of the ECHL in 2017-18.

Jamaica and Colombia, countries without ice rinks, were playing for a Cup — but each was also playing to prove a point.

Jamaica was trying to show that its effort to establish a hockey program to someday compete in the Winter Olympics is worthy of financial and fan support. Its roster had only one player who was born on the island. But the team earned a huge fan in Mair, who wore a yellow, green and black soccer jersey under his suit jacket as he watched the games Sunday.

“I’m super-impressed. They are dominating play, I’m so proud of them,” Mair said. “This is going to bring a lot of motivation, a lot of people are going to be inspired. I’m in awe of how well they are playing.”

The reaction to the team went from “Jamaica who?” to a prominently placed feature story Sunday in the Jamaica Observer, published in Kingston, about its tournament performance.

For Colombia, the tournament was about trying to solidify its place in the Latin American hockey hierarchy after it defeated a team from Mexico last year to win the inaugural Amerigol Cup. Colombia has also defeated Mexico, a country that does have ice rinks, at Pan American ice hockey tournaments.

“This really decides who the powerhouse in Latin America is,” Colombia coach Sam Uisprapassorn, a resident of Orange County, California, said of the Amerigol tournament. “Whether the team is affiliated with an International Ice Hockey Federation member or not, this is really setting the bar. You have a very, very strong program in Mexico. We’ve cemented our place in the Latin American hockey community, and then we have the up and comers, teams like Argentina and Brazil.”

Colombia didn’t leave the Amerigol Cup — which featured more than 400 players, 21 teams and four divisions — empty-handed. It won the tournament’s Under-16 division by defeating Argentina 3-1.