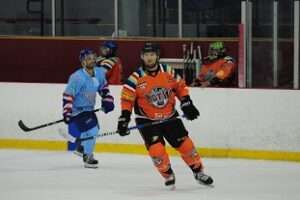 Argentina and Colombia had great showings as they were the only two countries represented at every level. Colombia finished in the top 3 in each of it’s respected divisions. Each division had a different country win their respected title as well (Jamaica, ROTW, Argentina, Colombia).

For me personally – I played with the ROTW team made up of primarily British nationals and Commonwealth citizens who have either lived or worked in the Falkland Islands (the smallest nation to ever play ice hockey). The level of play was naturally a bit mixed in the 2nd division because teams were made up of inline players, dek hockey players, and ice hockey players, some of whom have never skated on a full sized ice rink before (including our very own players Sam Cockwell and Claudio Ross with ROTW). For a lot of countries represented in this tournament – they primarily play inline hockey because they do not have access to ice or only get to play ice maybe once or twice a year.

The top men’s division was a bit better (in terms of skill level) compared to the second division with most players living and playing in North America. For example – some of the Jamaican team included players playing or living in Canada. These players do of course have direct ties and family members residing or from Jamaica. Access to ice and high-level competitive hockey is obviously more available throughout North America. Players in division one also included current professional players playing throughout North America. The main difference in skill level between these divisions was really just the access to ice and how often players from these teams are able to skate and play.

The U16 and Women’s divisions ended up being really competitive as well with Colombia and Argentina playing each other in both finals and with one team winning each division (Colombia U16 and Argentina for Women’s). A lot of players from both teams and both divisions arrived early in Florida to attend a Goalie and Sniper camp in order to get more ice time leading up to the tournament.

It’s been a few days since the tournament and I have already seen tremendous support pour in on social media including posts and shares from the NHL, IIHF, Spittin’ Chiclets Podcast, National Teams of Ice Hockey, and many others.

Overall, the tournament exceeded my expectations and was ran very professionally with some major sponsors onboard (Warrior Hockey and the Florida Panthers). Juan Carlos and the Amerigol Team did an amazing job bringing together 21 teams and 360 players to such an important development cup for Latin American teams and players. I would love to continue my involvement with this cup and can’t wait to see what next year brings!