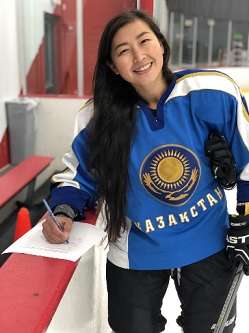 Kartanbay has become the first Kazakh athlete to play in NWHL

By Zhanna Shayakhmetova – The Astana Times

“We are really proud to welcome Bulbul to the Riveters and the NWHL. Her skill, dedication to the game and incredible enthusiasm will make her a valuable player for our team and a favourite of the fans,” said general manager Kate Whitman Annis.

According to the release, Kartanbay, 26, has been in the Kazakhstan National Team system since she was a teenager, putting up six points in 10 games in a pair of U18 World Junior Championships. She made her senior team debut at 18, has competed in five World Championships and played for Tomiris Astana and Aisulu Almaty of the Kazakhstan Women’s League. Last season, Kartanbay had eight goals and 21 assists for 29 points in 21 games with the Calgary Coyotes of the Southern Alberta Women’s Hockey Association.

Kartanbay started playing hockey at age 13 at the sports school for gifted children in Almaty. At first, she played football, but since she could not combine training with study, her parents began to look for another school.

“The start of the season is always exciting. I hope this season will be great for me and my team. I also hope the experience I get from playing games and practicing at this level will help with my development. I also hope the Riveters will be successful in our pursuit of winning the Isobel Cup,” Kartanbay said in an interview for The Ice Garden after signing the contract.

Kartanbay’s assent started in 2017 when she met former Toronto Furies General Manager Sami Jo Small, who advised her to play in the American or Canadian hockey leagues.

“Unfortunately, I had some visa issues and I couldn’t play for the Boston Blades for the 2017-18 season. In 2018, I got the visa and I was invited to join the Calgary’s training camp. I played this season at the Southern Alberta Women’s Hockey Association in Canada,” Kartanbay told The Astana Times.

This summer, she participated in free agent camps with the Minnesota Whitecaps and Buffalo Beauts.

“Actually, I was also offered a contract from a second NWHL team, but I decided to play for the Riveters,” she said.

“Of course, the trainings we have here are different from those we had in Kazakhstan. We have a training programme specially designed for ice and off-ice workouts. Our coaches, who are also rehabilitologists, pay attention not only to physical training, but also to mental health. I really like this approach. The workouts are diverse, intense and interesting,” she said.

Adapting to her new surroundings was an easy process, she noted, as the team and coaches are friendly and ready to help in any situation.

“I enjoy playing hockey. I am happy to be a part of this team. This is my dream,” she said.

“Women’s hockey is not popular in my country. Many people told me ‘This kind of sport is not for girls,’ but I have my own opinion, my own right, my own views on life,” she said.

In total, 171 Kazakh female players are registered with the International Ice Hockey Federation (IIHF). As of September, the national team is 19th in the IIHF Women’s World Ranking.

The Metropolitan Riveters, previously known as the New York Riveters, are based in Monmouth Junction, New Jersey.