Just like the legendary coach who led the U.S. men’s hockey team to an improbable gold medal at the 1980 Lake Placid Olympics, Hinderlie was tapped in 2015 for the seemingly improbable task of helping build a competitive national ice hockey team for Brazil.

“I showed up, watched all these guys play inline hockey and picked the team, essentially like Herb Brooks did,” said Hinderlie, who is from Minnesota, like Brooks, and coached ice hockey in Alaska before he moved to Brazil, his wife’s country. “Not being one too familiar with inline…I assumed it would easily translate to ice. Literally, the first day of practice when we showed up (on ice) in 2015, I had to change my entire plan for what I wanted to do and immediately bought six more hours of ice time.”

In life, you crawl before you walk. For the Brazil hockey team, most players learned to fall before they could skate. But it didn’t take them long to catch on, Hinderlie said.

“We really had to revert back to the basics: doing basic skating, learning how to fall and get up, but the guys really learned fast and picked it up quickly,” he said. “In literally in the span of four days, I taught them everything from the face-off to the break outs to really when to change lines. It came together very fast and the players were receptive.”

Brazil has been a member of the International Ice Hockey Federation since 1984, despite the absence of a regulation-sized hockey ice rink in the country. There are 330 hockey players in a nation of almost 207.4 million people

Hinderlie and his team did manage to pull off their own miracle, finishing third in Brazil’s second appearance at the Pan American Ice Hockey Tournament in 2015 in Mexico City. The third-place finish reflected improvement over Brazil’s Pan American debut in 2014 under a diffferent coach when it finished fifth with 0-4 record that included a 16-0 loss to host country Mexico. 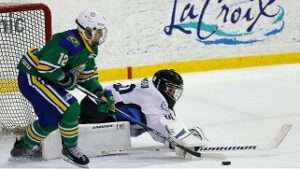 Brazil in action vs Argentina at the Latam Cup

But at the 2019 Amerigol LATAM hockey tournament at the Florida Panthers IceDen near Miami earlier this month, Brazil’s men’s Division I and women’s teams were winless and the men’s Division II team managed only one victory.

But players left Florida pleased that they had an opportunity to get on the ice and pumped about the work ahead of them to catch up to their Latin American and Caribbean hockey rivals.

“We got a lot of exposure and all the teams have grown so much — Argentina, Colombia, Brazil, Mexico,” Brazilian player Henrique Degani said of the Amerigol Cup. “From last year to this year, that’s when I saw the game improve the most for Latin America.”