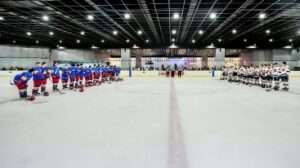 Top-seeded Philippines and Thailand met at the SM Mall of Asia Ice Skating Rink already at the 2018 IIHF Ice Hockey Challenge Cup of Asia. The venue in the Philippines will host the 2019 Southeast Asian Games ice hockey tournament

The Philippines will soon host the 30th Southeast Asia Games – a traditional multi-sports event in the region that takes place every two years.

It will be the second time after 2017 in Malaysia that ice sports will be included. Ice hockey debuted two years ago with the inauguration of the Malaysia National Ice Skating Stadium outside of the capital of Kuala Lumpur.

The newcomers from the Philippines surprised pre-tournament favourite Thailand in the deciding game to win the first SEA Games ice hockey tournament. A good omen for this year as the Philippines are the host of the SEA Games at various venues with a record number of 56 sports. Many Olympic sports, since 2017 ice sports but also less known sports such as the debut of… underwater hockey!

This year’s SEA Games are split into several clusters including ice sports in Manila’s metropolitan region. The ice hockey tournament will be held at the SM Mall of Asia Ice Skating Rink in Pasay south of Manila. The rink located in a mall has a full-size ice sheet and hosted the 2018 IIHF Ice Hockey Challenge Cup of Asia.

The tournament will include the Philippines, Thailand, Malaysia, Singapore and Indonesia. They will play a five-team round-robin competition followed by semi-finals and medal games. The tournament dates are 1-8 December 2019.