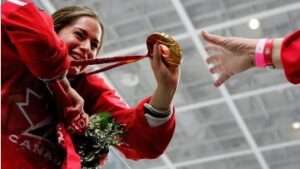 Thunder Bay’s Katie Weatherston is on the hunt for another gold medal.

But this time, she’ll be behind the bench instead of on the ice.

Weatherston, an Olympic champion and former professional hockey player, has signed as the head coach of the Lebanese women’s hockey team.

“We’re going to build something great,” Weatherston told CBC’s Superior Morning on Monday. “I’m super excited to be a part of it, and never would I [have] thought my hockey career would have led me here.”

Weatherston — who was part of the Canadian women’s hockey team that won gold at the 2006 Winter Olympics — was contacted by the Lebanese Ice Hockey Federation (LIHF) about the coaching job, and her hiring was made official earlier this month.

The LIHF is a relatively-new organization, Weatherston said, and is currently based in Montreal.

“A lot of [the players] have dual citizenship, so they’re Canadian and Lebanese,” she said. “Obviously, here, our program is stronger. They’ve been playing hockey a lot longer.”

“But we’re hoping to change that, and … develop hockey in Lebanon and bring some excitement to the country. They’re already really excited and supporting us.”

Lebanon itself, in fact, doesn’t have a rink yet, but Weatherston said that will be coming soon.

“By the sounds of it, they’re eager to build an arena,” she said. “Then, we can start developing local players as well, and get women involved in ice hockey there.”

Further, the LIHF was formally accepted into the International Ice Hockey Federation in September, clearing the way for Lebanese teams to compete at international events and tournaments.

The women’s team, Weatherston said, launched about a year ago, and the team will hold a training camp in Toronto in December.

“Most of the girls are on board,” she said. “We’re dealing with busy kids, too, that are in university hockey, they’re playing midget AA, so we’re trying to make that team a little bit more competitive.”

“We’re also putting a call out to Lebanese-Canadians, Lebanese-Americans, hockey players worldwide, we’re looking for them,” she said. “So, recruiting is a huge part right now, because we do not have a lot of players in our player pool.”

Weatherston said the goal is for the women’s team to start competing internationally in 2021.

“Obviously, I would love to go to the World Championships, or eventually the Olympics, but we have a lot of work to do before we get to that level,” she said.