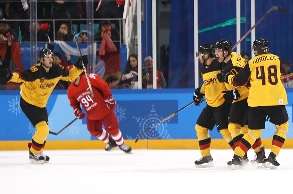 GANGNEUNG, SOUTH KOREA – FEBRUARY 25: Jonas Muller #41 of Germany celebrates with teammates after scoring in the third period against Olympic Athletes from Russia during the Men’s Gold Medal Game on day sixteen of the PyeongChang 2018 Winter Olympic Games at Gangneung Hockey Centre on February 25, 2018 in Gangneung, South Korea

By Ashley Glover – The Last Word on Hockey

Since placing second at the 2018 Winter Olympics, German hockey has been given much more respect on the world’s stage. They also appear to be becoming a somewhat new breeding ground for NHL talent. 100 point forward Leon Draisaitl has now become an elite player. Goaltenders Philipp Grubauer and Thomas Greiss are more than serviceable starters and Penguins winger Dominik Kahun can fill a role anywhere in the top-nine. These are just some of the key players who are providing a core and a pathway for the next wave of German hockey stars.

The Recent Boom in German Hockey

Moritz Seider, Dominik Bokk and Leon Gawanke are just some of the newer faces expected to grace NHL ice soon.

Seider, the sixth overall pick from the 2019 NHL Draft, was the DEL rookie of the year with champions Adler Mannheim. Seider also led Team Germany to a gold medal during the 2019 World Junior Division 1-A Championships. The six-foot-four defenceman projects to be a solid two-way, top-four defenceman in the NHL. He is now up to seven points (all assists) in 12 games with Detroit Red Wings AHL affiliate Grand Rapids Griffins.

Drafted 25th overall by the St. Louis Blues in 2018, Bokk has since been traded to the Carolina Hurricanes as a part of the deal for Justin Faulk. Bokk is a highly-skilled winger with top-six upside, currently skating with Rögle BK in the SHL.

Gawanke, a 2017 fifth-round pick by the Winnipeg Jets, had a good break out last season collecting 57 points with Cape Breton in the QMJHL. The solid two-way defender is now with the Jets AHL affiliate the Manitoba Moose. The Jets are currently attempting a rebuild on their backend. If Gawanke continues to develop, he may be a player for the future.

The Prospects On The Way

Lead by potential top 10 pick Tim Stützle, the 2020 crop of draft-eligible Germans is yet again impressive. Stützle, who is a star of the DEL’s Adler Mannheim, is a smart and nimble offensive weapon playing either centre or wing. A fantastic skater with a quick release, Stützle has drawn stylistic comparisons to former NHL MVP Taylor Hall.

The third notable prospect is John-Jason Peterka. After a standout 94 point season in the Czech under 19 league last season and a great international output (27 points in 24 games) Peterka has made the transition into the DEL nicely. So far this season, the flashy winger has six points in 17 games with EHC München.

German hockey has two first-rounders in the two most recent NHL drafts (Seider and Bokk), with Stützle soon to continue their streak next season. This has been good enough to solidify Germany as the sixth-ranked country for first-rounders over three drafts. If Czech winger Jan Mysak also falls in the first round, that will see both the Czech Republic and German tied for sixth. Considering how far German hockey has come in such a short time, that would be a massive achievement. Reichel in-particular will have his chance to prove his first-round worth later this year. He will suit up for Germany in the Under-20 World Junior Championships in the Czech Republic. A good showing may just see him break that tie for sixth. With the DEL expanding in the 2021/22 season to a relegation league, the quality should improve even more.

New rinks are in the works and player numbers are back up. The Germans aren’t far away from being a regular international force. German hockey is on the rise. 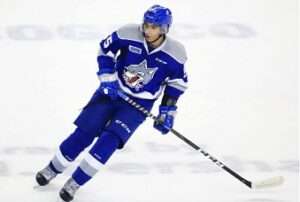 By Ryan Kennedy – The Hockey News

The third game of the CHL-Russia series took place on Thursday in Kitchener, with the OHL taking up the sword for the QMJHL, which split its two games with the Russians. The OHL dominated a Russian lineup that didn’t have a lot of firepower outside of Vasili Podkolzin (VAN) and Ivan Morozov (VGK), but what was most intriguing about the 4-1 home victory is how the youngest players on the team fared.

Team OHL featured four 2002 birthdays on the night, all of whom look to be major players in the 2020 draft this summer: Quinton Byfield, Cole Perfetti, Jamie Drysdale and Ryan O’Rourke (goalie Nico Daws, passed over in the last year’s draft, was also excellent). Drafted prospects such as Akil Thomas (LA), Ryan Merkley (SJ) and Connor McMichael (WSH) also had strong showings, but it was truly illuminating to see the 2020 ‘Big Four’ make major impacts in front of Canada’s world junior brain trust.

“The Russians are a big, heavy team,” said coach Dale Hunter. “And they held their own against big, strong guys that are older than them, so that’s a credit to them.”

Byfield is the best-known of the group, so let’s start with him. The Sudbury Wolves center is expected to go within the first two picks in the draft, at this point right behind Rimouski’s Alexis Lafreniere. Byfield earned player of the game honors for Team OHL in Kitchener on the strength of two primary assists and had no problem using his 6-foot-4, 215-pound frame to get his way, particularly in the offensive zone.

“I tried battling down low in the corners, showing my strength and putting my stamp on the game,” Byfield said. “I’m just trying to show a lot of people that I can play with older guys and that I’m ready for the next step.”

What makes Byfield such an intriguing prospect is that he’s still on his way up. The offensive skills are impressive, but he can put more weight and muscle on his frame, giving the youngster an incredible ceiling. He also showed his versatility by switching from center to wing, something Hunter likes to see in a player (which makes sense given how many natural centers Team Canada traditionally has on its national teams).

Perfetti came into the season looking like a potential top-five pick thanks to a big performance at the summer Hlinka-Gretzky tournament, not to mention his 37-goal rookie campaign with the Saginaw Spirit last year. He popped in the game-winner in Kitchener and looked dangerous throughout. Though he doesn’t have the size of Byfield, Perfetti brings his own tantalizing package of skills, including his vision and an incredible shot.

On the blueline, Drysdale has been everything for the Erie Otters this year and his hallmark comes with his skating. Simply put, every NHL team can use a defenseman with the mobility of Drysdale and he looked very good against the Russians. I would not be surprised if Drysdale is the first defenseman off the board this summer, so top-five is on the table for him, too.

Drysdale actually played on a pairing with O’Rourke in Kitchener and while he may be the least-known of the four, O’Rourke is opening eyes quickly. The 17-year-old was just named captain of the Sault Ste. Marie Greyhounds and that is quite the accomplishment for a second-year player. O’Rourke moves well too, but also has a nice level of snarl in his game. Both he and Drysdale can put points on the board, too. If O’Rourke continues his strong play, I could see him sneaking into the top-10 in the draft, but if he goes lower he’ll be a very nice pick-up for an NHL team.

And the best part of this Big Four? They like each other.

“We’re always hanging out at the hotel, we’re good friends off the ice,” Byfield said. “We always support each other on the ice as well. All three of them are special players and we thrive off each other. The energy between all of us is strong.”

How many of them will make the team? It’s difficult to say, given how loaded Canada is for skaters. For me, even surviving an initial cut at main camp would be a badge of distinction, but it sounds like Canada’s coaches are keeping an open mind.

“It’s always open,” Hunter said. “Whoever’s the best, we’ll take. That’s what you want; a battle for all positions.”