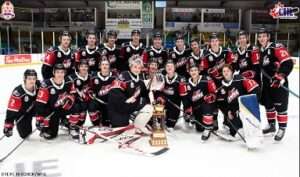 It was as if a Hollywood producer wrote the script for the series-deciding Game 6 of the 2019 CIBC Canada Russia Series.

Requiring extra time for a record fourth time in event history, Team Russia would prevail in the initial shootout session after scoring in each of its first three attempts to even the six-game set at nine points a side and set up a series-deciding shootout in order to decide a winner.

It was then the opposite outcome in the second shootout as Team WHL found its offense, though the session was not without further dramatics as after surrendering two goals the Russians subbed in cold netminder Amir Miftakhov who came off the bench and turned aside three shots before Kelowna Rockets captain and Tampa Bay Lightning first-round pick Nolan Foote sealed the victory for the CHL side.

The tally marked the third of the game for Foote, who claimed Player of the Game recognition, after he had lit the lamp with a two-goal effort in the middle frame as part of a special teams showcase that produced a trio of goals on the man advantage that ended with a final power play marker by Medicine Hat Tigers forward Ryan Chyzowski who completed a pretty tic-tac-toe passing sequence to help his side rally for three goals in 3:56.

“It was an intense game,” Foote said following the victory. “They came out hard in the second period, and those powerplays we had gave momentum to the team and guys were going. It was a hard-fought game and of course it went down to overtime and a shootout again, so it was fun.”

Not to be outdone, Russia scored a power play goal of its own after forward Zakhar Shablovskii cashed in from the doorstep after grabbing a feed from Vegas Golden Knights prospect Ivan Morozov to even the score with just over six minutes remaining in regulation and eventually send the game to extra time where the CHL claimed the winning side for the 13th time in event history.