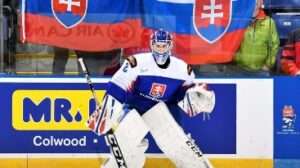 The Slovaks will try to advance from Group A in Trinec, where besides two Nordic teams – Finland and Sweden – they will also encounter predatory Switzerland and unpredictable Kazakhstan. It is also the start of a new era in Slovak junior hockey, with Ernest Bokros being replaced by Robert Petrovicky as head coach. It has been exactly five years since Slovakia last managed a medal at the IIHF World Junior Championships. Since then, they have advanced no further than the quarter-finals, being eliminated at that stage by Sweden three times.

“Slovaks love hockey,” says former player and coach Vladimir Vujtek Sr. The Czech has many ties to Slovakia, having served in the military there and played for Dukla Trencin in the top Czechoslovak league in the late 1970s and early ‘80s. He also coached the Slovak senior men’s national team at four World Championships – capturing a silver medal in 2012 – and the 2014 Winter Olympics in Sochi.

“The Slovaks will play every game for everything,” Vujtek believes. “The opening game against Kazakhstan will be very important for them.”

Slovakia has played in the top division of the World Junior Championships since 1995, when it made its way through from the C-Pool. Since then, the team has remained in the top division and won two bronze medals. The first came in 1999 in Winnipeg, when the team led by Ladislav Nagy managed to beat Sweden 5-4 in the game for third place. It was the first IIHF medal in any category for the six-year-old country.

Slovakia’s second medal came in 2015 in Toronto, when they again faced off with Sweden for bronze. Led by Peter Cehlarik, Martin Reway and goaltender Denis Godla, the Slovaks played an excellent third period and won 4-2.

Last year’s World Junior Championship left a bitter taste in the Slovaks’ mouths. In a tough group that included the USA, Sweden and Finland, they started well. They held a one-goal lead with 10 minutes left in their opening game against the favoured Americans, but late goals by Mikey Anderson and Evan Barratt turned the score upside down and left the Slovaks with nothing.

Following back-to-back games where they conceded five goals each, the Slovaks faced a must-win situation in their last group-stage game against Kazakhstan, and thanks to a six-goal first period, they cruised to an 11-2 victory and a spot in the elite eight. In the quarter-finals, though, the Slovaks hit a brick wall against Russia, falling behind early and eventually losing 7-0.

Last year, Slovakia relied mainly on players born in 1999, with only two players on the roster that are eligible to return for another tournament. One of them is up-and-coming goalie Samuel Hlavaj, who appeared in four games as an 18-year-old. This season, he is the starting netminder of the QMJHL’s Sherbrooke Phoenix and one of the best European goalies in the league, and will look to parlay another solid showing at the World Juniors into getting picked at the 2020 NHL Entry Draft.

The other returning player from last year is Marcel Dlugos. The sturdy defenceman is currently patrolling the blue line of HC Nove Zamky in Slovakia.

Martin Fasko-Rudas, now in his third season in North America, is one of the best players for the Everett Silvertips in the WHL and is eager to be drafted by an NHL team. Like Hlavaj, a strong showing at the World Juniors could help his cause.

Another great young Slovak player is Kristian Kovacik. Last season, he was named one of the top three players of his team in the U18 category. He currently plays in the Slovak Liga for Dukla Trencin, his hometown club to which he returned after a season in Canada.

The coaching staff of the Slovak national junior team was completely changed this year. Ernest Borkos was replaced as head coach by Robert Petrovicky, a star centre from the 1990s and 2000s who played in the NHL and KHL. This is the first-ever head coaching position for the Kosice native, but for the past two seasons he worked as an assistant for Slovan Bratislava and the Slovak senior men’s national team.

Petrovicky’s assistants will be Viliam Cacho and Martin Strbak, while Rastislav Stana has been named goaltending coach.

After the U20 Summer Hockey Challenge, the Slovak national junior team didn’t meet again until early November, when it hosted Germany, Norway and Switzerland as part of a four-nations tournament in Piestany, taking six of a possible nine points. Just before the start of the World Junior Championship, Petrovicky’s squad will play in Zilina against Russia.