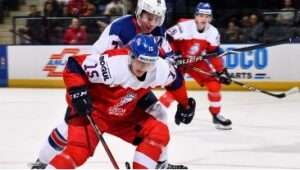 The IIHF World Junior Championship is returning to the Czech Republic after 12 years, and the host team is anxious to put on a good show in front of the home fans. The Czechs would love to reach the podium for the first time since 2005, when they finished third. For the second year in a row, they will be coached by Vaclav Varada, who has a bunch of interesting players with international experience to choose from.

The Czech Republic – and before that, Czechoslovakia – is one of the six countries that have never been relegated from the top division of the World Juniors. At the first tournament they hosted in 1977, the Czechoslovaks won the bronze medal, and they finished even better on home ice again in 1987 when they won the silver. In total, Czechoslovakia took five silver and six bronze medals during 17 tournaments, but never struck gold.

However, that was accomplished by the independent Czech Republic in 2000 and 2001. Famous players such as Martin Havlat, Zbynek Irgl, Martin Erat, Radim Vrbata and Tomas Plekanec were part of those championship teams. Their most recent medal, a bronze, the Czechs grasped in 2005. Since then, their best finish was fourth place two years ago in Buffalo.

Several Czech names are among the all-time leaders in several individual statistical categories. Robert Reichel collected 18 goals and 22 assists for a total of 40 points during his three-tournament stint, making him the second-highest scorer in World Junior history, behind only Peter Forsberg. Additionally, Vladimir Ruzicka is the tournament’s all-time goals leader with 25, and Michael Frolik belongs to a small group of players who participated in four tournaments – in Frolik’s case, from 2005 to 2008.

After their fourth-place finish in 2018,  the Czechs wanted to return to the semi-finals again last year. However, their route was cut short in the quarters. The Czechs finished third in Group A – where they beat Switzerland and Denmark but lost to Russia and Canada – with five points.

In the quarter-finals, the Czechs put up a valiant fight against the United States but fell 3-1 with an empty-net goal, which ultimately placed them seventh. Despite the early exit, goaltender Lukas Dostal pushed his save percentage above 95 during the four games he played.

The aforementioned Dostal should play again in Ostrava, as he was born in 2000, and is expected to remain the starting goalie. During the 2018 NHL Entry Draft, he was selected by the Anaheim Ducks, and the Brno native currently guards the Ilves Tampere net in the top Finnish league.

In addition to Dostal, the team will be led by several other players who were members of the second-place team at the 2017 Hlinka Gretzky Cup. Forwards Jan Jenik and Matej Pekarare currently plying their trades in the OHL, while Karel Plasek plays in the Czech Extraliga for Kometa Brno. Jakub Lauko should also get a third chance to play in the World Juniors; however, this depends on the Boston Bruins freeing him from the AHL’s Providence Bruins to attend the tournament.

From 2001-born players, it is important to mention defenceman Martin Hugo Has, who already played in last year’s tournament. Has was drafted by the Washington Capitals in June and is currently playing his third year in Finland. All-round forward Jaromir Pytlik could also be given a shot – the member of the OHL’s Sault Ste. Marie Greyhounds is expected to be picked in the early rounds of the 2020 NHL Entry Draft. There is a chance also for a talented 2002-born forward Jan Mysak, the HC Litvinov prospect who is also highly ranked for 2020.

For the second year in a row, the head coach of the Czech national junior team is Vaclav Varada. The former NHL right winger also played at the World Juniors in 1995 and 1996 and led his team with five goals in the 1996 tournament. In the senior category, Varada was a member of Czech World Championship teams in 2000 and 2005. During his career, he played in the NHL for the Buffalo Sabres and Ottawa Senators and won the Calder Cup in the AHL. After returning to Europe, Varada won the Spengler Cup and the Swiss National League with HC Davos and was able to dominate the Czech league during his stint with Ocelari Trinec before calling it a career.

In addition to coaching the Czech juniors, Varada is also in his third year behind Trinec’s bench, leading the team to the Czech title last season.

Preparations for the championship

After finishing the summer camps and games, the Czech team met again in early November at the four-nations tournament in Helsinki. With their roster supplemented by players based in North America, the Czechs’ last tune-up games for the Czechs before the tournament will be against Sweden on 20 December and Slovakia two days later.